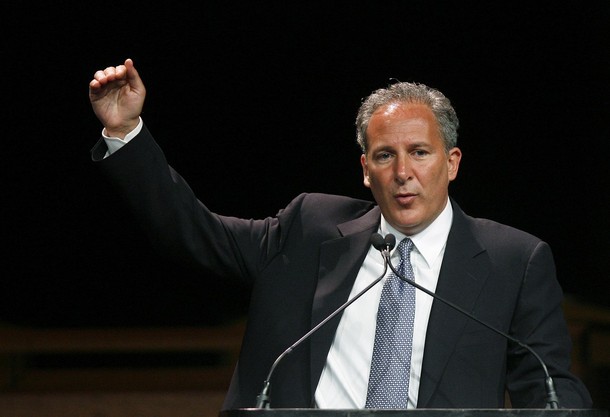 There is overwhelming agreement among economists that the Second World War was responsible for decisively ending the Great Depression. When asked why the wars in Iran (Peter Schiff is in the not too distant future here. Maybe he is a remote viewer and forgot to shift realities … or this is just a typho. 🙂 ) and Afghanistan are failing to make the same impact today, they often claim that the current conflicts are simply too small to be economically significant.

There is, of course, much irony here. No one argues that World War II, with its genocide, tens of millions of combatant casualties, and wholesale destruction of cities and regions, was good for humanity. But the improved American economy of the late 1940s seems to illustrate the benefits of large-scale government stimulus. This conundrum may be causing some to wonder how we could capture the good without the bad.

If one believes that government spending can create economic growth, then the answer should be simple: let’s have a huge pretend war that rivals the Second World War in size. However, this time, let’s not kill anyone.

Most economists believe that massive federal government spending on tanks, uniforms, bullets, and battleships used in World War II, as well the jobs created to actually wage the War, finally put to an end the paralyzing “deflationary trap” that had existed since the Crash of 1929. Many further argue that war spending succeeded where the much smaller New Deal programs of the 1930s had fallen short.

The War also wiped out the country’s chronic unemployment problems. In 1940, eleven years after the Crash, unemployment was still at a stubbornly high 8.1%. By 1944, the figure had dropped to less than 1%. The fresh influx of government spending and deployment of working-age men overseas drew women into the workforce in unprecedented numbers, thereby greatly expanding economic output. In addition, government spending on wartime technology produced a great many breakthroughs that impacted consumer goods production for decades.

So, why not have the United States declare a fake war on Russia (a grudge match that is, after all, long overdue)? Both countries could immediately order full employment and revitalize their respective manufacturing sectors. Instead of live munitions, we could build all varieties of paint guns, water balloons, and stink bombs.

Once new armies have been drafted and properly outfitted with harmless weaponry, our two countries could stage exciting war games. Perhaps the US could mount an amphibious invasion of Kamchatka (just like in Risk!). As far as the destruction goes, let’s just bring in Pixar and James Cameron. With limitless funds from Washington, these Hollywood magicians could surely produce simulated mayhem more spectacular than Pearl Harbor or D-Day. The spectacle could be televised — with advertising revenue going straight to the government.

The competition could be extended so that the winner of the pseudo-conflict could challenge another country to an all-out fake war. I’m sure France or Italy wouldn’t mind putting a few notches in the ‘win’ column. The stimulus could be never-ending.

If the US can’t find any willing international partners, we could always re-create the Civil War. Missed the Monitor vs. the Merrimack the first time? No worries, we’ll do it again!

But to repeat the impact of World War II today would require a truly massive effort. Replicating the six-fold increase in the federal budget that was seen in the early 1940s would result in a nearly $20 trillion budget today. That equates to $67,000 for every man, woman, and child in the country. Surely, the tremendous GDP growth created by such spending would make short work of the so-called Great Recession.

The big question is how to pay for it. To a degree that will surprise many, the US funded its World War II effort largely by raising taxes and tapping into Americans’ personal savings. Both of those avenues are nowhere near as promising today as they were in 1941.

Current tax burdens are now much higher than they were before the War, so raising taxes today would be much more difficult. The “Victory Tax” of 1942 sharply raised income tax rates and allowed, for the first time in our nation’s history, taxes to be withheld directly from paychecks. The hikes were originally intended to be temporary but have, of course, far outlasted their purpose. It would be unlikely that Americans would accept higher taxes today to fund a real war, let alone a pretend one.

That leaves savings, which was the War’s primary source of funding. During the War, Americans purchased approximately $186 billion worth of war bonds, accounting for nearly three quarters of total federal spending from 1941—1945. Today, we don’t have the savings to pay for our current spending, let alone any significant expansions. Even if we could convince the Chinese to loan us a large chunk of the $20 trillion (on top of the $1 trillion we already owe them), how could we ever pay them back?

If all of this seems absurd, that’s because it is. War is a great way to destroy things, but it’s a terrible way to grow an economy.

What is often overlooked is that war creates hardship, and not just for those who endure the violence. Yes, US production increased during the Second World War, but very little of that was of use to anyone but soldiers. Consumers can’t use a bomber to take a family vacation.

The goal of an economy is to raise living standards. During the War, as productive output was diverted to the front, consumer goods were rationed back home and living standards fell. While it’s easy to see the numerical results of wartime spending, it is much harder to see the civilian cutbacks that enabled it.

The truth is that we cannot spend our way out of our current crisis, no matter how great a spectacle we create. Even if we spent on infrastructure rather than war, we would still have no means to fund it, and there would still be no guarantee that the economy would grow as a result.

What we need is more savings, more free enterprise, more production, and a return of American competitiveness in the global economy. Yes, we need Rosie the Riveter — but this time she has to work in the private sector making things that don’t explode. To do this, we need less government spending, not more.

– Peter Schiff: Obama’s Financial Reform Does Nothing To Address The Underlying Problems

– Peter Schiff: Alan Greenspan Is A Traitor To Everything America Stands For