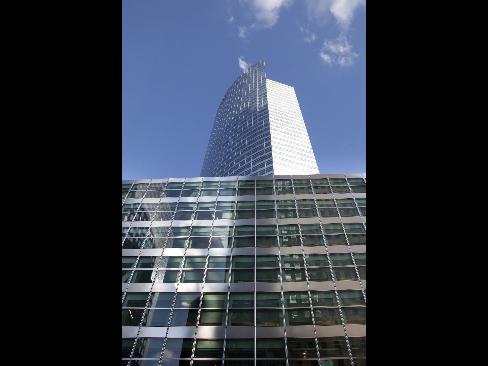 The building that will house the new headquarters of Goldman Sachs Group Inc. beginning in March, stands at 200 West Street in New York, U.S., on Jan. 20, 2010. Photographer: JB Reed/Bloomberg

Feb. 23 (Bloomberg) — When a congressional panel convened a hearing on the government rescue of American International Group Inc. in January, the public scolding of Treasury Secretary Timothy F. Geithner got the most attention.

Lawmakers said the former head of the New York Federal Reserve Bank had presided over a backdoor bailout of Wall Street firms and a coverup. Geithner countered that he had acted properly to avert the collapse of the financial system.

A potentially more important development slipped by with less notice, Bloomberg Markets reports in its April issue. Representative Darrell Issa, the ranking Republican on the House Committee on Oversight and Government Reform, placed into the hearing record a five-page document itemizing the mortgage securities on which banks such as Goldman Sachs Group Inc. and Societe Generale SA had bought $62.1 billion in credit-default swaps from AIG.

These were the deals that pushed the insurer to the brink of insolvency — and were eventually paid in full at taxpayer expense. The New York Fed, which secretly engineered the bailout, prevented the full publication of the document for more than a year, even when AIG wanted it released.

That lack of disclosure shows how the government has obstructed a proper accounting of what went wrong in the financial crisis, author and former investment banker William Cohan says. “This secrecy is one more example of how the whole bailout has been done in such a slithering manner,” says Cohan, who wrote “House of Cards” (Doubleday, 2009), about the unraveling of Bear Stearns Cos. “There’s been no accountability.”

The document Issa made public cuts to the heart of the controversy over the September 2008 AIG rescue by identifying specific securities, known as collateralized-debt obligations, that had been insured with the company. The banks holding the credit-default swaps, a type of derivative, collected collateral as the insurer was downgraded and the CDOs tumbled in value.

The public can now see for the first time how poorly the securities performed, with losses exceeding 75 percent of their notional value in some cases. Compounding this, the document and Bloomberg data demonstrate that the banks that bought the swaps from AIG are mostly the same firms that underwrote the CDOs in the first place.

The banks should have to explain how they managed to buy protection from AIG primarily on securities that fell so sharply in value, says Daniel Calacci, a former swaps trader and marketer who’s now a structured-finance consultant in Warren, New Jersey. In some cases, banks also owned mortgage lenders, and they should be challenged to explain whether they gained any insider knowledge about the quality of the loans bundled into the CDOs, he says.

“It’s almost too uncanny,” Calacci says. “If these banks had insight into the underlying loans because they had relationships with banks, originators or servicers, that’s at the least unethical.”

The identification of securities in the document, known as Schedule A, and data compiled by Bloomberg show that Goldman Sachs underwrote $17.2 billion of the $62.1 billion in CDOs that AIG insured — more than any other investment bank. Merrill Lynch & Co., now part of Bank of America Corp., created $13.2 billion of the CDOs, and Deutsche Bank AG underwrote $9.5 billion.

These tallies suggest a possible reason why the New York Fed kept so much under wraps, Professor James Cox of Duke University School of Law says: “They may have been trying to shield Goldman — for Goldman’s sake or out of macro concerns that another investment bank would be at risk.”

Schedule A also makes possible a more complete examination of why AIG collapsed. Joseph Cassano, the former president of the AIG Financial Products unit that sold the swaps, said on a December 2007 conference call that his firm pulled back from selling swaps on U.S. subprime residential CDOs in late 2005. The list shows that the $21.2 billion in CDOs minted after 2005, mostly based on prime and commercial mortgages, performed as badly as or worse than the earlier subprime vintages.

As details of the coverup emerge, so does anger at the perceived conflicts. Philip Angelides, chairman of the Financial Crisis Inquiry Commission, at a hearing held by his panel on Jan. 13, questioned how banks could underwrite poisonous securities and then bet against them. “It sounds to me a little bit like selling a car with faulty brakes and then buying an insurance policy on the buyer of those cars,” he said.

‘Part of the Coverup’

Janet Tavakoli, founder of Tavakoli Structured Finance Inc., a Chicago-based consulting firm, says the New York Fed’s secrecy has helped hide who’s responsible for the worst of the disaster. “The suppression of the details in the list of counterparties was part of the coverup,” she says.

E-mails between Fed and AIG officials that Issa released in January show that the efforts to keep Schedule A under wraps came from the New York Fed. Revelation of the messages contributed to the heated atmosphere at the House hearing.

“What date did you know there was a coverup?” Republican Congressman Brian Bilbray of California demanded of Geithner. Lawmakers used the word coverup more than a dozen times as they peppered Geithner with questions.

Geithner said that he wasn’t involved in matters of disclosure and that his former colleagues did the best they could. In a Jan. 19 statement, the New York Fed said, “AIG at all times remained responsible for complying with its disclosure requirements under the securities laws.”

The government has committed more than $182 billion to AIG and owns almost 80 percent of the company.

In late November 2008, the insurer was planning to include Schedule A in a regulatory filing — until a lawyer for the Fed said it wasn’t necessary, according to the e-mails. The document was an attachment to the agreement between AIG and Maiden Lane III, the fund that the Fed established in November 2008 to hold the CDOs after the swap contracts were settled.

AIG paid its counter­parties — the banks — the full value of the contracts, after accounting for any collateral that had been posted, and took the devalued CDOs in exchange. As requested by the New York Fed, AIG kept the bank names out of the Dec. 24 filing and edited out a sentence that said they got full payment.

The New York Fed’s January 2010 statement said the sentence was deleted because AIG technically paid slightly less than 100 cents on the dollar.

Before the New York Fed ordered AIG to pay the banks in full, the company was trying to negotiate to pay off the credit- default swaps at a discount or “haircut.”

By March 2009, responding to a request from Christopher Dodd, chairman of the Senate Committee on Banking, Housing and Urban Affairs, AIG released the names of the counterparty banks. In a filing later that month, AIG included Schedule A, showing bank names while withholding all identification of the underlying CDOs and the amounts of collateral each bank had collected. The document had more than 800 redactions.

In May 2009, AIG again filed Schedule A, this time with about 400 redactions. It revealed that Paris-based Societe Generale got the biggest payout from AIG, or $16.5 billion, followed by Goldman Sachs, which got $14 billion, and then Deutsche Bank and Merrill Lynch. It still kept secret the CDOs’ identification and information that would show performance.

“This is something that belongs in the public domain because it was done with public money,” Issa says. “The public has the right to know what was done with their money and who benefited from it.” Now, thanks to Issa, the list is out, and specific information about AIG’s unraveling can be learned from it.

At the Jan. 27 hearing, the New York Fed was still arguing that the contents of Schedule A shouldn’t be fully disclosed. Thomas Baxter, the New York Fed’s general counsel, testified that divulging the names of the CDOs could erode their value: “We will be hurt because traders in the market will know what we’re holding.”

Tavakoli calls that wrong. With many CDOs, providing more information to the market will give the manager a greater chance of fetching a realistic price, she says.

Jack Gutt, a spokesman for the New York Fed, declined to comment, as did AIG’s Mark Herr.

Tavakoli also says that the poor performance of the underlying securities (which are actually specific slices or tranches of CDOs) shows they were toxic in the first place and were probably replenished with bundles of mortgages that were particularly troubled. Managers who oversee CDOs after they are created have discretion in choosing the mortgage bonds used to replenish them.

“The original CDO deals were bad enough,” Tavakoli says. “For some that allow reinvesting or substitution, any reasonable professional would ask why these assets were being traded into the portfolio. The Schedule A shows that we should be investigating these deals.”

Among the CDOs on Schedule A with notional values of more than $1 billion, the worst performer was a tranche identified as Davis Square Funding Ltd.’s DVSQ 2006-6A CP. It was held by Societe Generale, underwritten by Goldman Sachs and managed by TCW Group Inc., a Los Angeles-based unit of SocGen, according to Bloomberg data. It lost 77.7 percent of its value — though it isn’t in default and continues to pay.

Ed Grebeck, CEO of Tempus Advisors, a global debt market strategy firm in Stamford, Connecticut, agrees that more digging is necessary. “You need all the documentation and more than that, all the e-mails,” he says. “That would allow us to understand what went wrong and how to fix it going forward.”

Neil Barofsky, the special inspector general for the Troubled Asset Relief Program, who delivered a report on the AIG bailout in November, says he’s not finished. He has begun a probe of why his office wasn’t provided all of the 250,000 pages of documents, including e-mails and phone logs, that Issa’s committee received from the New York Fed.

Schedule A provides some answers — and raises questions that need to be tackled to avoid the next expensive bailout.

To contact the reporter on this story: Richard Teitelbaum in New York at rteitelbaum1@bloomberg.net