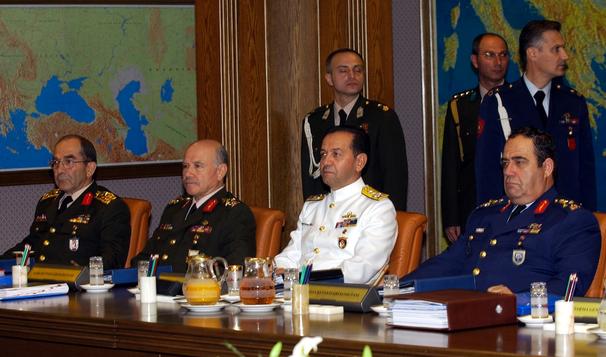 FILE – In this Sept. 19, 2003 file photo, Turkish commanders, from left, Chief of Staff Gen. Hilmi Ozkok, Land Forces commander Aytac Yalman, Navy Commander Ozden Ornek and Air Forces Commander Ibrahim Firtina seen during a meeting of the National Security Council in Ankara, Turkey. Police detained more than 40 high-ranking military commanders Monday, Feb. 22, 2010, for allegedly plotting to overthrow the Islamic-rooted government. Several high-ranking members of Turkey’s military, including Firtina and Ornek, were among those detained. The sweep highlighted the ongoing struggle between the secular establishment and the Islamic-oriented government, and left many wondering if the military no longer called the shots in a nation accustomed to viewing it as the pillar of the secular state. (AP Photo/Burhan Ozbilici, File)

(AP) ANKARA, Turkey — Prosecutors on Tuesday interrogated 51 Turkish military commanders, including former Air Force and Navy chiefs, over alleged plans to destabilize the country by blowing up mosques to trigger a coup and topple the Islamic-rooted government.

It was the highest profile crackdown ever on the Turkish military, which has ousted four governments since 1960. For decades Turkey’s senior officers, self-appointed guardians of the country’s secular tradition, called the shots.

But the balance of power in this EU-candidate country appeared to have shifted Monday as police rounded up the 51 military commanders, following the gathering of wiretap evidence and discovery of an alleged secret coup plan, dubbed “the sledgehammer.”

The nationwide sweep has dramatically deepened a power struggle between the secular establishment and the government, which has strong electoral backing and the European Union’s support. Turkey’s elite military — known as “pashas,” a title of respect harking back to Ottoman times — were once deemed untouchable.

“The most heavy sledgehammer to military custody,” read banner headline of daily Taraf, which has published leaked military documents that lead to the detentions.

The English-language newspaper Today’s Zaman said Tuesday that the operation was launched after experts determined the leaked documents were authentic. The government denies the ongoing crackdown is politically motivated or designed to silence government critics, as is claimed by opposition parties.

All of the suspects, including nearly two dozen retired and active duty generals and admirals, were expected after questioning to appear Tuesday in an Istanbul court that is hearing all coup plot allegations.

The suspects face charges of attempting to topple the government by force, and membership in an illegal organization for that purpose, daily Milliyet said Tuesday.

Prime Minister Recep Tayyip Erdogan said the government is preparing to overhaul the judiciary and the Constitution, a legacy of the 1980 military coup and could even take the issue to a “referendum.”

“A new constitution would make it easier for us to enter the EU,” said Burhan Kuzu, head of a parliamentary commission in charge of constitutional amendments, at a conference Monday in central Anatolian city of Corum.