‘Carbon Trading’ should not even exist:

This has nothing to do with saving the planet. 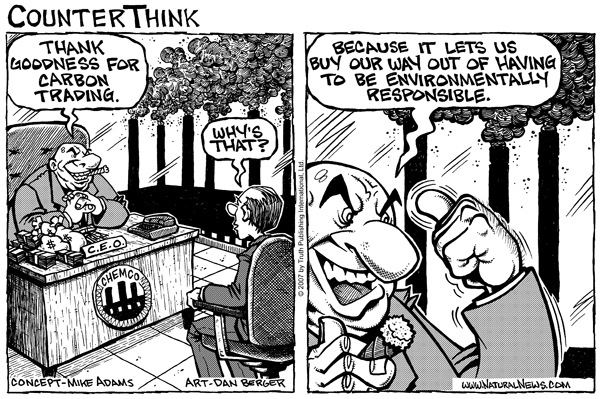 And you will be presented the bill in form of higher prices.

Forget CDOs and other inventions of the great credit bubble. That’s all old hat. Investment bankers are moving on to an area of securities trading that is potentially even more lucrative, and what’s more, even has a social value – saving the planet. Or supposedly so, anyway. I’ve long had my suspicions about the great carbon trading bubble, and I’ve had them pretty much confirmed by a brilliant article which has been drawn to my attention by one Mark Schapiro in Harper’s magazine.

According to Mr Schapiro, carbon trading is now the fastest growing commodities market on earth. Since Kyoto signatories bought in to the cap and trade concept in 2005, there have been more than $300bn carbon transactions, prompting several investment banks, including Goldman Sachs and Barclays, to set up their own carbon trading desks. But that’s just the start. If President Obama and his supporters can institute a cap-and-trade system in the United States – and that’s a big if for this increasingly marooned presidency – demand could explode into a $2 to $3 trillion market.

And here’s the great thing about it. Unlike traditional commodities markets, which will eventually involve delivery to someone in physical form, the carbon market is based on lack of delivery of an invisible substance to no-one. Since the market revolves around creating carbon credits, or finding carbon reduction projects whose benefits can then be sold to those with a surplus of emissions, it is entirely intangible.

“Carbon developers”, many of them employed by large multinationals, travel the world in search of carbon reduction projects to sell, while firms of carbon accountants have been established to verify on the United Nations’ behalf that those reductions are real. The whole thing, though well intentioned, looks wide open to abuse and scams. Mr Schapiro’s account of the carbon trading market is obviously a sceptical one, and no doubt there are others that take a less cynical view. But I wonder what all the wide eyed climate change campaigners are going to say when the first scandals begin to break, still more what they’ll make of it when the whole thing turns out to be another giant asset bubble – if indeed the non production of carbon can be described as an asset.