Dr. John Robson investigates the unsound origins and fundamental inaccuracy, even dishonesty, of the claim that 97% of scientists, or “the world’s scientists”, or something agree that climate change is man-made, urgent and dangerous.

TRCS Chairman, Retired NASA Physicist & Engineer, Dr. Harold Doiron, explains the derivation of his analysis of the effect of atmospheric CO2 on global warming. He demonstrates in a compelling manner how his model, simple compared to elaborate computerized climate models, correlates with global temperatures for the past 150 years, the period of increasing use of fossil fuels.

Meanwhile at the UN:

The United Nations has called on world countries to redouble efforts and take a dramatic action to halt global warming before it is too late.

– Ex-NOAA Climate Scientist: ‘No Role Of CO2 In Any Signiﬁcant Change Of The Earth’s Climate’:

“The synodic period (TS—two successive conjunctions of the same bodies) of two planets 1 and 2 is given by 1/TS=1/T1−1/T2 (with T1<T2). The sidereal periods for Uranus and Neptune are 84.02 and 164.79 years, respectively.  This gives TUN =172 years. This is the main driver seen in the angular momentum of the Sun about the SSB.  The relationship of when a solar Grand Minima occurs always involves these four giant planets in their relationship with the Sun and as depicted in Fig. 11—Uranus, Neptune and Jupiter together and Saturn opposite the Sun.” 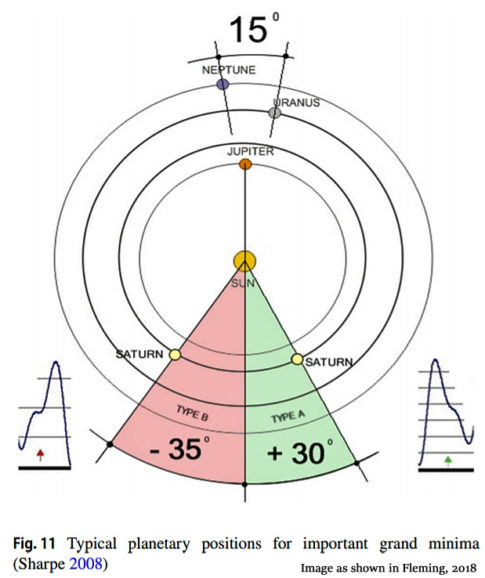 “Fascinating.
The evidence is so clear from the data, yet slimy politicians continue to flog the global warming dead horse.”

The Little Ice Age, following the historically warm temperatures of the Medieval Warm Period, which lasted from about AD 950 to 1250, has been attributed to natural cycles in solar activity, particularly sunspots. A period of sharply lower sunspot activity known as the Wolf Minimum began in 1280 and persisted for 70 years until 1350. That was followed by a period of even lower sunspot activity that lasted 90 years from 1460 to 1550 known as the Sporer Minimum. During the period 1645 to 1715, the low point of the Little Ice Age, the number of sunspots declined to zero for the entire time. This is known as the Maunder Minimum, named after English astronomer Walter Maunder. That was followed by the Dalton Minimum from 1790 to 1830, another period of well below normal sunspot activity. 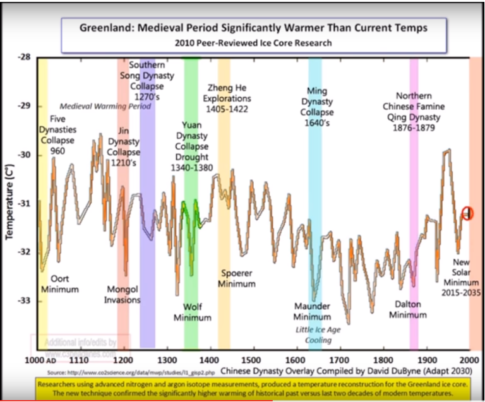 “The climate scare is the biggest deception in history.”
– Dr. Tim Ball and Tom Harris

“Climate alarmists insist that manmade carbon dioxide emissions are the primary or even sole force driving global warming and climate change,” says Paul Driessen. “They refer to carbon dioxide as “carbon” emissions and “pollution” – knowing these terms are false and misleading, but also knowing they help drive the “dangerous manmade climate change” narrative and campaigns to end fossil fuel use.”

“In fact, as Tim Ball and Tom Harris note in this perceptive review of the history behind the climate change movement, the entire global warming narrative has been junk science and fake news from the very beginning.”

President Donald Trump announced that the United States would withdraw from the Paris Agreement on climate change because it is a bad deal for America.

He could have made the decision simply because the science is false. However, most of the American and global public have been brainwashed into believing the science is correct (and supported by the faux 97% consensus), so they would not have believed that explanation.

Canadian Prime Minister Justin Trudeau, and indeed the leaders of many western democracies, support the Agreement and are completely unaware of the gross deficiencies in the science. If they understood those deficiencies, they wouldn’t be forcing a carbon dioxide (CO2) tax on their citizens.

Trudeau and other leaders show how little they know, and how little they assume the public knows, by calling it a “carbon tax” on “carbon emissions.” But CO2 is a gas, the trace atmospheric gas that makes life on Earth possible. Carbon is a solid, and carbon-based fuels are solid (coal), liquid (oil) or gaseous (natural gas).

CO2 is an invisible, odorless gas essential to plant photosynthesis

By constantly railing about “carbon emissions,” Trudeau, Obama and others encourage people to think of carbon dioxide as something “dirty,” like soot, which really is carbon. Calling CO2by its proper name would help the public remember that it is actually an invisible, odorless gas essential to plant photosynthesis.

Canadian Environment Minister Catherine McKenna is arguably the most misinformed of the lot, saying in a recent interview that “polluters should pay.” She too either does not know that CO2is not a pollutant, or she is deliberately misleading people.

Like many of her political peers, McKenna dismisses credentialed PhD scientists who disagree with her approach, labelling them “deniers.” She does not seem to understand that questioning scientific hypotheses, even scientific theories, is what all scientists should do, if true science is to advance.

That is why the Royal Society’s official motto is “Nullius in verba,” Latin for “Take nobody’s word for it.” Ironically, the Society rarely practices this approach when it comes to climate change.

Mistakes such as those made by McKenna are not surprising, considering that from the outset the entire claim of anthropogenic global warming (AGW) was built on falsehoods and spread with fake news.

A plot to deceive the world

After spending five days at the U.N. with Maurice Strong, the first executive director of UNEP, Hamilton Spectator investigative reporter Elaine Dewar concluded that the overarching objective of the IPCC was political, not scientific. “Strong was using the U.N. as a platform to sell a global environment crisis and the global governance agenda,” she wrote.

The political agenda required “credibility” to accomplish the deception. It also required some fake news for momentum. Ideally, this would involve testimony from a scientist before a legislative committee.

Riding the global warming issue even if the theory is wrong

U.S. Senator Timothy Wirth (D-CO) was fully committed to the political agenda and the deception. As he explained in a 1993 comment, “We’ve got to ride the global warming issue. Even if the theory of global warming is wrong, we will be doing the right thing.…”

In 1988 Wirth was in a position to jump-start the climate alarm. He worked with colleagues on the Senate Energy and Natural Resources Committee to organize and orchestrate a June 23, 1988 hearing where the lead witness would be Dr. James Hansen, then the head of the Goddard Institute for Space Studies.

“We knew there was this scientist at NASA, who had really identified the human impact before anybody else had done so and was very certain about it. So, we called him up and asked him if he would testify.”

Hansen did not disappoint. The New York Times reported on June 23, 1988: “Today Dr. James E. Hansen of the National Aeronautics and Space Administration told a Congressional committee that it was 99 percent certain that the warming trend was not a natural variation, but was caused by a buildup of carbon dioxide and other artificial gases in the atmosphere.”

Specifically, Hansen told the committee, “Global warming has reached a level such that we can ascribe with a high degree of confidence a cause and effect relationship between the greenhouse effect and observed warming…. It is already happening now.”

Wirth, who presided at the hearing, was pre-disposed to believe Hansen and told the committee. “As I read it, the scientific evidence is compelling: the global climate is changing as the earth’s atmosphere gets warmer,” Wirth said. “Now the Congress must begin to consider how we are going to slow or halt that warming trend, and how we are going to cope with the changes that may already be inevitable.”

More than any other event, that single hearing before the Energy and Natural Resources Committee publicly initiated the climate scare, the biggest deception in history. It created an unholy alliance between a bureaucrat and a politician, which was bolstered by the U.N. and the popular press – leading to the hoax being accepted in governments, industry boardrooms, schools and churches all across the world.

Dr. John S. Theon, Hansen’s former supervisor at NASA, wrote to the Senate Minority Office at the Environment and Public Works Committee on January 15, 2009. “Hansen was never muzzled, even though he violated NASA’s official agency position on climate forecasting (i.e., we did not know enough to forecast climate change or mankind’s effect on it). Hansen thus embarrassed NASA by coming out with his claims of global warming in 1988 in his testimony before Congress.”

Hansen never abandoned his single-minded, unsubstantiated claim that CO2 from human activities caused dangerous global warming. He defied Hatch Act limits on bureaucratic political actions, and in 2011 even got arrested at a White House protest against the Keystone XL pipeline. It was at least his third such arrest to that point.

Like Trudeau and other leaders duped by the climate scare, Senator Wirth either had not read or did not understand the science. In fact, an increasing number of climate scientists (including Dr. Ball) now conclude that there is no empirical evidence of human-caused global warming. There are only computer model speculations that humans are causing it, and every forecast made using these models since 1990 has been wrong – with actual temperatures getting further from predictions with every passing year.

President Trump must now end America’s participation in the fake science and fake news of manmade global warming. To do this, he must withdraw the U.S. from further involvement with all U.N. global warming programs, especially the IPCC, as well as the agency that now directs it – the United Nations Framework Convention on Climate Change. He should also launch a “Red Team” exercise that lets non-alarmist scientists examine climate cataclysm claims and the purported evidence for them.

Only then will the U.S. have a chance to fully develop its hydrocarbon resources to achieve the president’s goal of global energy dominance and long-term prosperity for America and the world.

Dr. Tim Ball is an environmental consultant and former climatology professor at the University of Winnipeg in Manitoba.