The CDC is made up of a corrupt bunch of liars:

How come the UK government knows about the connection:

“Neurologists told to be alert for an increase in a brain disorder called Guillain-Barre Syndrome (GBS), which could be triggered by the vaccine.”

I have seen the following article before, but at first I decided not to post it.

But for this young man and for everyone else I have changed my mind. 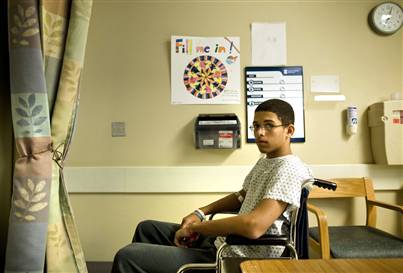 Jordan McFarland, 14, was hospitalized for five days after coming down with Guillain-Barre syndrome hours after receiving a vaccination for H1N1.

A 14-year-old Virginia boy is weak and struggling to walk after coming down with a reported case of Guillain-Barre syndrome within hours after receiving the H1N1 vaccine for swine flu.

Jordan McFarland, a high school athlete from Alexandria, Va., left Inova Fairfax Hospital for Children Tuesday night in a wheelchair nearly a week after developing severe headaches, muscle spasms and weakness in his legs following a swine flu shot. He will likely need the assistance of a walker for four to six weeks, plus extensive physical therapy.

“The doctor said I’ll recover fully, but it’s going to take some time,” the teenager said.

Jordan is among the first people in the nation to report developing the potentially life-threatening muscle disorder after receiving the H1N1 vaccine this fall. His alarming reaction was submitted via msnbc.com’s reader reporting tool, First Person, by his stepmother, Arlene Connin.

Increased cases of GBS were found in patients who received a 1976 swine flu vaccine, but government health officials say they’ve seen no rise in the condition associated with the current outbreak.

So far, the federal Centers for Disease Control and Prevention have received five reports of GBS in people who received the H1N1 vaccine since Oct. 6, not including Jordan’s case, said Dr. Claudia J. Vellozzi, deputy director for immunization safety.

Out of about 40 million doses of H1N1 vaccine available to date, that’s a far lower rate of GBS than the 1 case that develops in every 1 million people who receive the regular flu vaccine.

“It’s much less than we’d expect,” she said, adding that many cases go unreported.

In 1976, about 1 additional case of GBS developed in every 100,000 people who were vaccinated against the swine flu, according to the CDC.

Hospital officials didn’t dispute that the boy had GBS, but refused to comment on the boy’s condition or treatment, even after his family granted permission.

“They don’t want to create a fear or panic in the community,” said Jordan’s stepmother, Connin.

Connin and Jordan’s father, Calvin McFarland, both 38, believe the shot sparked the illness that came on 18 hours after the boy’s vaccination.

But Vellozzi said there’s no clear link between the new vaccine and the disease.

“We know that GBS and other illnesses occur routinely in the U.S.,” Vellozzi said, noting that 80 to 120 cases are diagnosed each week in the general population.