(Infinite Unknown) Why has President Obama declared swine flu to be a national emergency? Swine flu infections have peaked out already. Swine flu is a very mild flu, that kills far, far less people than the normal seasonal flu. So why the emergency? (What does the government know that the people don’t know?)

Remember that Ron Paul is not only an outstanding politician, that understands economics and knows what he is talking about when he opens his mouth, but also a medical doctor.

The official reasons you’ve been given why Obama’s daughters haven’t been vaccinated against swine flu are nothing but excuses (or better obvious lies).

President Obama doesn’t want his daughters to be vaccinated against swine flu. Basta! 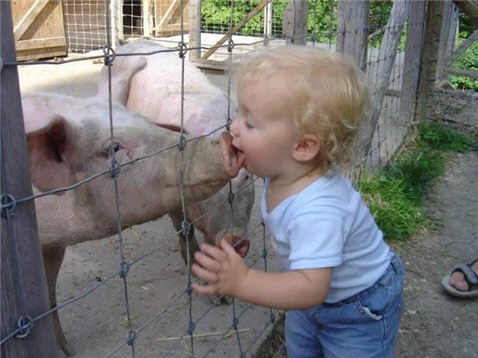 (NaturalNews) Swine flu infections have peaked out in the USA, even before drug companies could get their vaccines injected into everyone. According to CDC findings announced recently in Atlanta, one in five U.S. children have already experienced the flu this month, and most of those were likely H1N1 swine flu cases, the CDC says.

This comes from a survey of over 10,000 U.S. households conducted by the CDC.

Meanwhile, flu vaccine shipments are way behind schedule. There have been supply problems from the start, and as of right now, relatively few Americans have yet been injected with the swine flu vaccine. (Many have stood in line for hours trying to be injected, but were told to go home with the vaccine ran out.)

Further supporting that notion, researchers from Purdue University just published a paper in the October 15 issue of Eurosurveillance (a science journal about communicable disease) in which researchers stated that the H1N1 swine flu epidemic would peak during “week 42” (the end of October). Week 42 just passed. It’s over.

The AJC is also reporting this week that swine flu is “retreating” in Georgia, where hospital visits from the flu are markedly down (http://www.ajc.com/health/swine-flu…) and fewer illnesses are being reported in schools, too.

Even the WHO is reporting a downward trend in many areas, saying, “In tropical areas of the world, rates of illness are generally declining, with a few exceptions. …In tropical Asia, of the countries that are reporting this week, all report decreases in respiratory disease activity.” (http://www.who.int/csr/don/2009_10_…)

Meanwhile, even as the swine flu infection peaks out, the shortage of swine flu vaccines means few people have yet been vaccinated. The shortage is causing “chaos” in clinics across the country, news reports say, and flu vaccination events have been cancelled due to the non-arrival of expected vaccines.

And what, exactly, is causing this shortage of vaccines? According to Health and Human Services Secretary Kathleen Sebelius, they’re being caused by “production failures” at the drug manufacturing facilities.

Too little, too late

Is she serious? People are lining up to be injected with chemicals made by companies that are suffering “production failures?” If these companies can’t meet the production targets they already promised, how can we expect them to meet the safety targets they promised?

The bigger point, though, is that by the time vaccines are available for everyone, most people will have already been exposed to the H1N1 virus and therefore won’t even need a vaccine. There’s also evidence that previous exposure to seasonal flu may confer some natural immunity to H1N1, meaning that vaccines may be redundant from the start (http://www.naturalnews.com/027337_H…).

Delivering vaccines to the public after the pandemic peaks and wanes is sort of like putting on your seatbelt after a head-on collision. (This metaphor assumes, just for the moment, that swine flu vaccines actually work. Even though they don’t.)

Through the coming holiday season, we’ll all get to watch the CDC, the FDA and drug companies desperately try to push vaccines onto people, most of whom are already immune to H1N1 because they were exposed during the peak of the pandemic. This will be quite entertaining to observe because you’ll get to watch health authorities in action, attempting to fabricate an emergency when the pandemic threat has already faded. To maximize vaccinations (and therefore Big Pharma revenues), they’ll need to keep pushing the pandemic fears through the winter months while hoping that no one notices the H1N1 pandemic has evaporated.

Predictably, the big push at that point will be based on the following logic: “Even if you were already exposed to H1N1, getting a vaccine shot can’t hurt. Might as well get one!”

The CDC, which once promised 150 million vaccines by mid-October has pushed its prediction to year’s end. Unless some new H1N1 mutation is released into the population by some bioterrorist group, it’s fairly obvious that the swine flu will have fizzled out by the time Christmas rolls around.

So what will all these clinics do with all the millions of doses of vaccines that nobody really needs at that point? It might seem prudent to dump them down the river, except for the fact that their chemical additives and preservatives make many vaccines qualify as “hazardous waste” according to EPA regulations. It’s illegal to toss them into rivers or even dump them down the drain… it’s perfectly legal, though, to inject them into the body of a six-year-old.

Why don’t they just save the vaccines for next year? They’ll be useless, of course, but no more useless than they already are this year. Just save up all the vials and unleash another swine flu scare next fall to get rid of the inventory! (Don’t laugh. These people might actually take the idea seriously…)

You gotta love the pharmaceutical industry. After forty years of research into cancer (and tens of billions of dollars spent on it), they have yet to find a cure for any cancer at all. And with the swine flu fiasco, they almost managed to come up with a vaccine, but the human immune system — combined with a nation full of sneezers and spreaders — beat them to it.

It must really be depressing to wake up one day as a pharmaceutical company executive and realize you’re irrelevant… and that your “lifesaving” products are obsolete before they even hit the streets. Of course, the ridiculously high pay might make up for some of that, and if you get really depressed, you can always take your own company’s pills if you’re willing to brave the suicide risk. But in the end, the simple fact is that human beings would be better off of the drug companies didn’t exist.

The fact that H1N1 swine flu has already peaked out before the bulk of the vaccine shipments have even arrived proves, once again, how utterly pathetic and medically useless flu vaccines are in the first place. There is nothing a flu vaccine can do that simple vitamin D can’t do better, and the sad truth is that the entire flu vaccine industry is built on medical quackery and marketing propaganda.

Sources for this story include:
http://www.breitbart.com/article.ph…