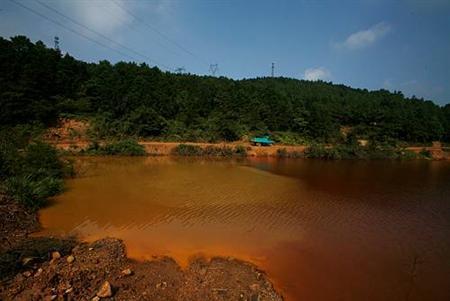 A lake near Da Bao Shan in the northern part of China’s Guangdong province turns reddish brown after the water was contaminated for years August 27, 2009. It is highly unusual for people to contract cancer at tender ages, but not in the villages around Da Bao Shan, one of China’s largest mine that produces lead, zine, cadmium and other heavy metals. (REUTERS)

HONG KONG (Reuters) – One needs to look no further then the river that runs through Shangba to understand the extent of the heavy metals pollution that experts say has turned the hamlets in this region of southern China into cancer villages.

The river’s flow ranges from murky white to a bright shade of orange and the waters are so viscous that they barely ripple in the breeze. In Shangba, the river brings death, not sustenance.

“All the fish died, even chickens and ducks that drank from the river died. If you put your leg in the water, you’ll get rashes and a terrible itch,” said He Shuncai, a 34-year-old rice farmer who has lived in Shangba all his life.

“Last year alone, six people in our village died from cancer and they were in their 30s and 40s.”

Cancer casts a shadow over the villages in this region of China in southern Guangdong province, nestled among farmland contaminated by heavy metals used to make batteries, computer parts and other electronics devices.

Every year, an estimated 460,000 people die prematurely in China due to exposure to air and water pollution, according to a 2007 World Bank study.

Yun Yaoshun’s two granddaughters died at the ages of 12 and 18, succumbing to kidney and stomach cancer even though these types of cancers rarely affect children. The World Health Organization has suggested that the high rate of such digestive cancers are due to the ingestion of polluted water.

“It’s because of Daboshan and the dirty water,” said the 82-year-old grandmother. “The girls were always playing in the river, even our well water is contaminated,” Yun told Reuters during a visit to the village.

The river where the children played stretches from the bottom of the Daboshan mine, owned by state-owned Guangdong Dabaoshan Mining Co Ltd, past the ramshackle family home. Its waters are contaminated by cadmium, lead, indium and zinc and other metals.

The villagers use well water in Shangba for drinking but tests published by BioMed Central in July show that it contains excessive amounts of cadmium, a heavy metal that is a known carcinogen, as well as zinc which in large quantities can damage the liver and lead to cancer.

“China has many ‘cancer villages’ and it is very likely that these increased cases of cancer are due to water pollution,” said Edward Chan, an official with Greenpeace in southern China.

But it’s not just water, the carcinogenic heavy metals are also entering the food chain.

Mounds of tailings from mineral mining are discarded alongside paddy fields throughout the region.

“If you test this rice, it will be toxic but we eat it too, otherwise, we will starve,” said He, the farmer, as he shoveled freshly milled rice into a sack. “Yes, we sell this rice too.”

Few families in the villages downstream from the Daboshan mine have been left untouched by cancer.

The most common cancers are those of the stomach, liver, kidney and colon, accounting for about 85 percent of cancers. Cancer incidence rates in these villages are not available, but rights groups say they are far higher than the national average.

“In southern China, where communities depend largely from ponds or lakes for drinking water, the rates of digestive system cancer are very high,” said a report ‘Environment and People’s Health in China’, published by the World Health Organization and United Nations Development Programme in 2001.

Across China, there are hundreds, perhaps thousands of small, anonymous villages that are suffering the consequences of the country’s rapid economic expansion, villages with rates and types of cancers that experts say can only be due to pollution.

This may be the fate of more and more of China’s population as mines and factories spew out tens of millions of tonnes of pollution every year, into the water system as well as the air, to produce the fruits of China’s economic growth.

Death rates from cancer rose 19 percent in cities and 23 percent in rural areas in 2006, compared to 2005, according to official Chinese media, although they did not give exact figures.

The health burden has an economic price. The cost of cancer treatment has reached almost 100 billion yuan a year ($14.6 billion), accounting for 20 percent of China’s medical expenditure, according to Chinese media.

The lack of a national health system means that most of the victims must pay their medical bills themselves.

Healthcare costs took up 50 percent of household income in China in 2006 due to inadequate health insurance, according to a paper published in the Lancet in October 2008.

China does not have a comprehensive state healthcare system and more than 80 percent of farmers have no medical insurance at all, although there are plans for sweeping reforms so that by 2011, most of the population will have basic medical coverage.

The residents of so called cancer villages, meanwhile, struggle to fund their medical care, often going into debt to pay crippling pharmaceutical and doctors’ bills.

“An official did come to give me our compensation, 20 yuan ($2.93),” said Liang Xiti, whose husband died of stomach cancer at the age of 46. His medicines alone cost the family 800 yuan a month, she said.

Zhang Jingjing, a lawyer who is helping the villagers, said the local mine has promised to distribute a few thousands yuan to all the villagers every year.

Even though the funds will barely cover medical expenses, Zhang says it is an encouraging first step.

“This means the mine admits it is polluting the environment. If it did no wrong, it won’t give out this money.”