The UK and the US are broke. 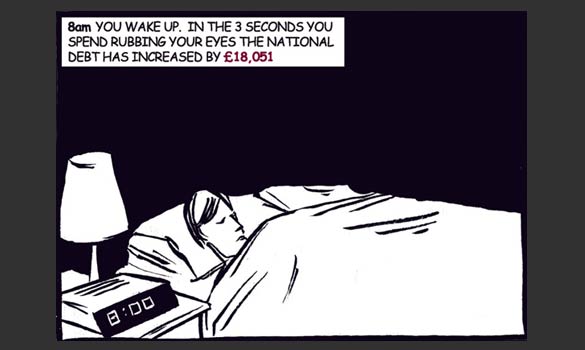 Britain is clocking up debt at a rate of £6,017 per second as the Government struggles to balance the books. With tax receipts plummeting because of the recession, state borrowing grew by £16.1 billion last month – almost twice the entire budget for the 2012 Olympics.

Net borrowing for the first five months of the financial year stood at £65.3 billion, compared with £26.1 billion at the same stage last year. Total borrowing soared past the £800 billion mark for the first time and total state debt as a proportion of national output reached 57.5 per cent.

Just to pay the interest on its ballooning debts the Government must find more than £30 billion a year – about £500 for every man, woman and child in the country.

The figures from the Office for National Statistics (ONS) show that tax receipts in August dived by 9 per cent compared with August 2008, while public spending rose by almost 3 per cent. The widening gulf was bridged by borrowing. Spending on benefits grew by £900 million to £13.5 billion as unemployment soared.

Taking fright at the figures, foreign exchange dealers sent sterling diving to a four-month low against the euro. The value of the pound fell by more than 1 per cent against the dollar.

Analysts said that the Budget forecast by Alistair Darling, the Chancellor, that additional borrowings would be £175 billion this year was not pessimistic enough and predicted that borrowing would be between £15 billion and £50 billion above that forecast.

John Hawksworth, chief economist at PricewaterhouseCoopers, said: “It seems likely that budget deficits will overshoot Treasury forecasts not only in 2009-10 but for years to come.”

Philip Hammond, the Shadow Chief Secretary to the Treasury, said: “We used to worry about borrowing £16 billion in an entire year. Now Labour have done it in just one month. These shocking figures show the depth of Gordon Brown’s debt crisis and just how irresponsible he was to pretend that spending cuts weren’t necessary.”

Mr Brown has been accused of misleading the Commons by berating the Conservatives for preparing public spending cuts when leaked Treasury documents show that he was examining his own cuts. This week he acknowledged for the first time that cuts in public spending would be necessary and yesterday he began holding a series of meetings with Cabinet ministers to discuss cuts.

Around the world, governments have kept spending to prevent a global depression, sending state borrowing soaring to $35 trillion, according to the Economist Intelligence Unit. The G20 leaders will discuss when to reverse stimulus policies of high public spending and ultra-low interest rates when they meet in Pittsburgh next week.

Measured as a proportion of national income, total UK government borrowing is not out of line with other rich nations, but it is growing much faster. The ONS figures exclude many public sector liabilities, including unfunded pension promises and some costs of the banking bailouts.

Gemma Tetlow, of the Institute for Fiscal Studies, said that the Treasury’s coffers would be boosted by the rises in fuel duty and stamp duty and the reinstatement of 17.5 per cent VAT.

A Treasury spokesman said that the figures were in line with government forecasts. “They reflect the impact of the global financial crisis on tax receipts as well as the action we are taking to support the economy and invest to benefit from the recovery.”