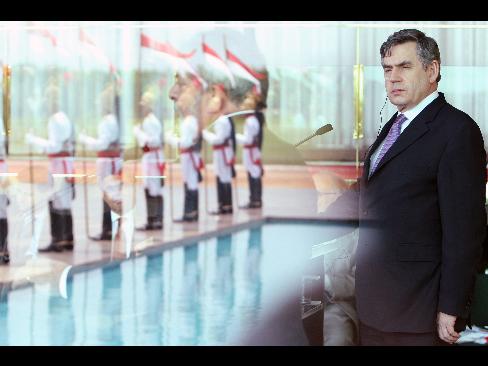 “The probability of a real sterling crisis is around one in three, and the probability of major tax hikes and cuts in public spending is roughly one in one,” the Harvard University professor says.

Ferguson’s concern stems from the deterioration in the U.K.’s public finances, which prompted Standard & Poor’s to warn on May 21 that the country could lose its AAA debt rating. The firm estimated the cost of propping up Britain’s banks at 100 billion pounds ($166 billion) to 145 billion pounds and said government debts could double to almost 100 percent of gross domestic product by 2013.

Chancellor of the Exchequer Alistair Darling said on April 22 that this year’s government deficit would hit 12.4 percent of GDP. Alan Clarke, a London-based economist at BNP Paribas SA, expects it to reach 17 percent of GDP in 2010.

“We’re not Iceland or Ireland, but we’re closer to them than we are to the U.S.,” says Ferguson, author of “The Ascent of Money: A Financial History of the World” (Penguin, 2008). Iceland had to borrow from the International Monetary Fund to avoid default after its banks collapsed in October; Ireland this year may have the steepest economic contraction of any industrialized nation since the Great Depression.

Britons can expect to face spending cuts in coming years in all areas, including social security and health care, says Nigel Lawson, who was chancellor of the Exchequer under Margaret Thatcher from 1983 to 1989.

Political chaos is complicating the financial crisis. In May, the Daily Telegraph reported that lawmakers had been reimbursed for expenses such as moat cleaning and massage chairs, leading at least 15 to say they won’t stand for reelection. With his popularity plunging, Labour Prime Minister Gordon Brown then suffered the indignity of six cabinet ministers quitting in one week in early June, including two caught up in the expenses scandal.

Brown now trails Conservative leader David Cameron by 8 to 22 points, according to 21 polls in May and June. By law, Brown must call an election no later than June 2010.

“Our public finances are easily the worst we’ve ever had in peacetime,” Lawson, 77, says. “The amount of borrowing the government will have to do as a result of the deficit is very worrying.” He says yields on U.K. debt will have to climb to attract buyers.

The government must sell about 900 billion pounds of gilts over five years, Clarke says. He estimates that the Bank of England will buy a third of these gilts to pump money into an economy mired in its worst recession since World War II. The government may struggle to find buyers for the rest, he says.

Ferguson cites as a warning signal the rise in the yield on 10-year gilts, which was 3.6 percent yesterday, up from 2.9 percent in March. “Bond investors have real doubts about the fiscal stability of the U.K., and they want some kind of risk premium,” he says.

Andrew Bosomworth, a fund manager in Munich at Pacific Investment Management Co., agrees with Ferguson that a weakening of the pound is likely. “In a worst-case scenario, there could be a run on the currency,” he says.

The U.K.’s expansionary fiscal and monetary policy — it is simultaneously boosting spending and buying its own debt — bothers Bosomworth. So does the possibility the government will have to help pay for further bank losses. “I’m not panicking, but those are real material risks,” he says. “It’s a very fragile situation.”

Not a Safe Haven

Ferguson takes no solace from the pound’s recent rally against the dollar. While it climbed to $1.66 yesterday from $1.37 in March, it’s still down 22 percent since November 2007.

“The big difference between the two countries is that the U.S. issues the world’s No. 1 currency and is regarded, partly for that reason, as a safe haven,” Ferguson says. “The U.K. used to be, but we’re not anymore. That means we have much more currency risk here.”

The U.S. is one of the 18 countries that S&P rates AAA. The U.K. is the only country on that list with a negative outlook from the firm.

Bad as it is, the fiscal mess is unlikely to end in disaster, says Ben Broadbent, U.K. economist at Goldman Sachs Group Inc. “We had debt of over 200 percent of GDP after World War II and we didn’t default,” he says. “I don’t look at the public borrowing numbers alone and think there’s a big risk of default or a currency crisis.”

Broadbent is less concerned about looming bank losses than about the recession’s impact on government tax receipts, particularly from the battered financial and housing industries.

The price of credit-default swaps on U.K. sovereign debt has surged as investors try to protect against a deterioration in creditworthiness. The cost of the five-year contract rose to 81 cents per $100 of insured debt on June 26 from 14 cents a year earlier.

“I don’t think the U.K. is going to default,” Ferguson says. Still, debasing the currency has some of the same effects as defaulting on interest payments, he says, because it erodes the value of the money the government uses to repay its creditors.

The current crisis has stirred memories of 1976, when sterling collapsed and the U.K. had to borrow from the IMF. Meghnad Desai, emeritus professor at the London School of Economics and a Labour member of the House of Lords, says the situation is far less perilous this time because many other countries have heavy debts and face similar recessions.

“In the 1970s, the British economy was out of kilter with other economies,” Desai says. Given the size of the U.S. fiscal deficit, he says the dollar could prove more vulnerable than the pound.

That may be little consolation for Brown. The Labour leader is loath to make himself more unpopular by cutting spending and raising taxes to tackle the deficit, says George Magnus, senior economic adviser at UBS AG. “This government has got itself into a policy vacuum until the next election,” Magnus says. “I don’t expect them to do anything of significance to stabilize public finances.”

Historian Ferguson sees no alternative to such stringency. “It has to happen,” he says. “This kind of red ink implies both spending cuts and tax hikes that could make the 1980s look like a teddy bear’s picnic.”

To contact the reporter on this story: William Green in London at wgreen6@bloomberg.net.