Rep. Ron Paul so far has won 245 co-sponsors to a bill that would require a full-fledged audit of the Federal Reserve by the end of 2010. 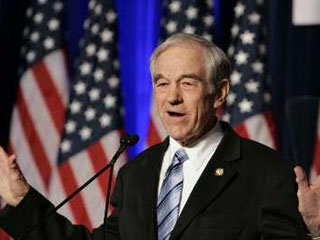 All of a sudden, Congress is paying close attention to Ron Paul.

The feisty congressman from Texas, whose insurgent “Ron Paul Revolution” presidential campaign rankled Republican leaders last year, now has the GOP House leadership on his side — backing a measure that generated paltry support when he first introduced it 26 years ago.

Paul, as of Tuesday, has won 245 co-sponsors to a bill that would require a full-fledged audit of the Federal Reserve by the end of 2010.

Paul attracted just 18 co-sponsors when he authored a similar bill, which died, in 1983. While the impact Fed policies have on inflation is once again a concern, fears about loose monetary policy and excessive federal spending appear even more widespread in 2009.

“In the past, I never got much support, but I think it’s the financial crisis obviously that’s drawing so much attention to it, and people want to know more about the Federal Reserve,” Paul told FOXNews.com.

“If they give them a lot more power and there’s no more transparency, that’ll be a disaster,” he said.

The bill would call for the comptroller general in the Government Accountability Office to audit the Fed and report those findings to Congress. The GAO’s ability to conduct such audits now is severely restricted.

A slew of top Republicans are backing the bill, as are many Democrats.

“Ron Paul has the right idea on this,” said Sen. Jim DeMint, R-S.C., who supports similar legislation in the Senate. “I’m just hoping we can get a clear audit. … We need to know what they’re up to.”

House Republican Leader John Boehner, who signed on as a co-sponsor this month, wrote in a recent blog post that the “lack of transparency and accountability” regarding federal dollars committed by the Fed and Treasury Department raise “serious concerns” and make an audit critical.

Unfortunately for Paul, the bill appears to be idling in the House Financial Services Committee, which is chaired by Barney Frank, D-Mass. The bill has been sitting there, gathering co-sponsors, since Paul introduced it in late February.

“You’ve kind of got to rely on the Democratic leadership (to move the bill along),” a Boehner aide said. “I haven’t heard a lot of support from Chairman Frank.”

Calls to Frank’s office were not returned.

Paul acknowledged that his bill hasn’t advanced but said Frank has “promised” him he will deal with his bill and is willing to give it a hearing. Paul said it’s easily got the “momentum” to pass the full House.

A representative with the Federal Reserve could not be reached for comment.

Obama, though, voiced confidence in Fed Chairman Ben Bernanke last Tuesday and defended the Fed’s overall ability to regulate effectively as well as his proposal to give the body more power.

“If you look at what we’ve proposed, we are not so much expanding the Fed’s power as we are focusing what the Fed needs to do to prevent the kinds of crises that are happening again,” Obama said. “We want that power to be available so that taxpayers aren’t on the hook.”

Sen. Bernie Sanders, I-Vt., introduced a bill similar to Paul’s in the Senate in March, which so far has attracted just three co-sponsors — DeMint and Republican Sens. David Vitter of Louisiana and Mike Crapo of Idaho.

But DeMint told FOX News last week that the measure would have a good chance of passing the Senate if supporters can push Paul’s to a vote, which he said would be successful, in the House.

“I think if we can get that much attention on this bill, I don’t believe senators could vote against it, if people knew what they were voting for because everyone is suspicious of the Federal Reserve,” DeMint said.

Paul’s underlying goal is to abolish the Federal Reserve, which he finds contemptible.

But the move to require an audit, which Paul described as “neutral,” puts him a bit more in the congressional mainstream.

That’s a change of pace. The long-time congressman’s GOP primary bid was decidedly outside the mainstream. His campaign drew enthusiastic support last year, and though it wasn’t enough to pose an electoral threat to the top candidates, he even staged his own September counter-convention in Minneapolis — down the road from the official Republican National Convention in St. Paul. His “Rally for the Republic” drew more than 10,000 supporters and was complete with a rock band and a slew of faux-delegates wielding signs for their states.

Paul frequently plays the role of party and congressional outsider. Most recently, he was the lone “no” vote on last Friday’s resolution to condemn the Iranian government’s crackdown on protesters.

He cited constitutional concerns in that vote, as he has in his criticism of the Fed and a slew of other issues.

“The whole process is unconstitutional. There is no legal authority to operate such a monetary system,” Paul said in February, in a statement calling for Washington to “end the Fed.” He introduced the Federal Reserve Transparency Act the following day.