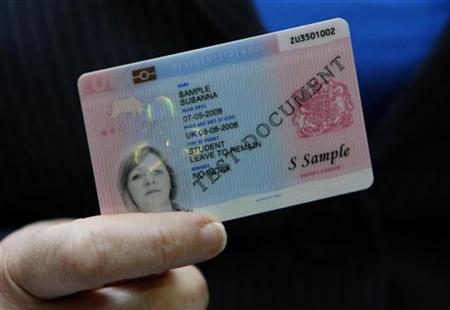 The Conservative Party, ahead in the polls and tipped to win the next election due by mid-2010, has pledged to scrap the scheme as part of public spending cuts to help deal with Britain’s spiralling debt.

“Holding an identity card should be a personal choice for British citizens — just as it is now to obtain a passport,” Johnson said in a written parliamentary statement.

Under the government’s original plans, the cards were to be issued this year to airside staff at Manchester and London City airports, to the ire of unions, before the project was rolled out across Britain by 2012.

Further legislation would have been required before the cards were made compulsory but the government had indicated that its aim was for all Britons to be covered by the scheme.

Johnson, who moved to the home office in a government reshuffle earlier this month, said the project would now be voluntary but its rollout would be accelerated.

Johnson said the scheme was now expected to cost 30 percent less than the most recent estimate. The figure previously given was 4.7 billion pounds over the next decade.

Earlier this month the Financial Times reported that the government would not award the contract to produce the cards — for which Thales, IBM and Fujitsu were bidding — until the end of 2010.

Unlike in many European countries where citizens are expected to carry ID cards, Britons have not been issued with them since their abolition after World War Two.

Prime Minister Gordon Brown and his predecessor Tony Blair have argued that ID cards were essential to help fight organised crime and terrorism, as well as making it easier for people to access public services such as healthcare.

But Johnson played down potential security benefits, instead saying the cards would be useful for more mundane purposes, such as proving age, and helping counter identity fraud which costs the British economy some 1.2 billion pounds a year.

Foreign nationals from outside the European Economic Area would still be required to have ID cards with 50,000 already issued, he said.

The Conservatives said the decision was a retreat.

“They have spent millions on the scheme so far — the Home Secretary thinks it has been a waste and wants to scrap it, but the prime minister won’t let him,” said the party’s home affairs spokesman Chris Grayling.

“So we end up with an absurd fudge instead.”