“Tony Crescenzi, chief bond-market strategist at Miller Tabak & Co. in New York, says foreign investors might also get spooked if they conclude that the Fed is monetizing the government’s debt — in effect, printing money — by buying Treasuries.”

“Bernanke himself, in his 2003 speech, said monetization of the debt risked faster inflation — something bond investors, foreign or domestic, wouldn’t like.”

Because the U.S. government can’t raise taxes much higher it has to finance its debt and all those ‘not working’ bailouts and stimulus packages by issuing an enormous amount of Treasuries. This is nothing more than a promise of a tax hike in the future, because that debt has to be paid back one day plus interest.

Countries like China, Japan and Saudi Arabia have to believe in the solvency of the U.S. to buy those Treasuries, but since the U.S. Treasury will issue record amounts of treasuries in the coming years the trust that the U.S. might be able to pay its debt back wanes.

Since those countries are now also in serious trouble themselves their appetite for U.S. Treasuries will decline dramatically.

If the Fed is now buying those Treasuries by ‘printing money’ – which increases the money supply = the definition for inflation – then it will create massive inflation.

Inflation is really nothing more than a hidden tax:

That is why the governments of the world love Keynesianism – Obamanomics stimulus packages – so much.

It should be called stealing or high treason instead.

The Fed and the government will create hyperinflation and destroy the dollar.

The Greatest Depression is coming. 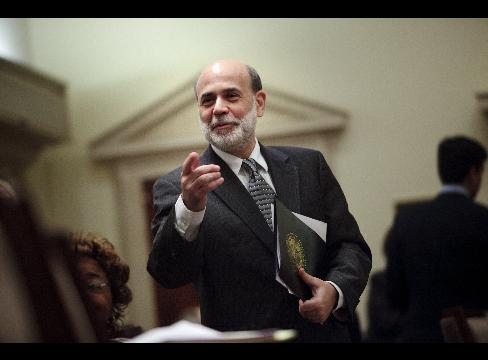 Ben S. Bernanke, chairman of the U.S. Federal Reserve, gestures to a staff member following an open board of meeting on credit-card practices in Washington on Dec. 18, 2008. Photographer: Brendan Smialowski/Bloomberg News

Jan. 26 (Bloomberg) — Federal Reserve Chairman Ben S. Bernanke and his colleagues may try once again to cure the aftermath of a bubble in one kind of asset by overheating the market for another.

Fed policy makers meeting tomorrow and the day after are exploring the purchase of longer-dated Treasury securities in an effort to push up their price and bring down their yield. Behind the potential move: a desire to reduce long-term borrowing costs at a time when the Fed can’t lower short-term interest rates any further because they are effectively at zero.

The risk is that central bankers will end up distorting the Treasury market, triggering wild swings in prices — and long-term interest rates — as investors react to what they say and do. “It sets forth a speculative dynamic that is very unstable,” says William Poole, former president of the Federal Reserve Bank of St. Louis and now a senior fellow at the Cato Institute in Washington.

“I will say, and I have said for the past three months, the governments are very overvalued,” Gross said in a Jan. 20 interview. Treasuries last year returned 14 percent, according to Merrill Lynch & Co.’s Treasury Master Index, their best performance since 1995.

Recent history shows the economic danger of inflating asset prices. After a stock-market bubble burst in 2000, the Fed slashed interest rates to as low as 1 percent and in the process helped inflate the housing market. The collapse of that bubble is what eventually helped drive the U.S. into the current recession, the worst in a generation.

Faced with the danger of a deflationary decline in output, prices and wages, the Fed is considering steps to revive the moribund economy. On the table besides bond purchases: firming up a pledge to keep short-term interest rates low for an extended period and adopting some type of inflation target to underscore the Fed’s determination to avoid deflation.

The central bank has been buying long-term Treasury debt off and on for years as part of its day-to-day management of reserves in the banking system. Yet it has always gone out of its way to avoid influencing prices. What it’s discussing now, says former Fed Governor Laurence Meyer, is deliberately trying to push long rates below where they otherwise might be.

Bernanke raised this possibility in a speech on Dec. 1. While he didn’t specify what maturities the Fed might buy, in the past he has suggested that purchases might include securities with three- to six-year terms.

Investors immediately took notice, with the yield on the 10-year note falling to 2.73 percent from 2.92 percent the day before. Yields fell further on Dec. 16, dropping to 2.26 percent from 2.51 percent the previous day, after the central bank’s policy-making Federal Open Market Committee said it was studying the issue.

Yields have since risen, with the 10-year note ending last week at 2.62 percent. Behind the reversal: expectations of massive fresh supplies of Treasuries as the government is forced to finance an $825 billion economic-stimulus package and a possible new bank-bailout plan. This week alone, the Treasury is scheduled to auction $135 billion worth of securities.

David Rosenberg, chief North American economist for Merrill Lynch in New York, says the jump in yields may prompt the Fed to go ahead with Treasury purchases.

This isn’t the first time Bernanke and the Fed have discussed buying longer-dated securities and ended up roiling the market. Bernanke touted the idea as a tool to fight deflation in speeches in November 2002 and May 2003.

Egged on by his comments — and later remarks by then-Fed Chairman Alan Greenspan that the central bank needed to build a “firewall” against deflation — many investors became convinced the central bank was poised to buy bonds. The yield on the 10-year Treasury note fell to 3.11 percent in June 2003 from 3.81 percent at the start of the year.

Traders quickly reversed course as it became clear the Fed had no such intentions, sending the 10-year Treasury yield soaring to 4.6 percent just three months later, on Sept. 2.

Poole, who was then at the St. Louis Fed, was critical at the time of what he called the central bank’s “miscommunication.” He now sees the Fed making the same mistake with its latest suggestions that it might buy longer- dated securities.

“If they do it, it’s going to be disruptive to the market,” says Poole, who is a contributor to Bloomberg News. “If they don’t do it, it will impair the Fed’s credibility and erode the confidence the market has in the statements that the Fed makes.”

Meyer, now vice chairman of St. Louis-based Macroeconomic Advisers, says the Fed should, and probably will, go ahead with purchases as a way to lower borrowing costs. “The story is stop talking and start buying,” he says.

Still, he notes that not everyone at the Fed is enthusiastic about the idea. One concern: Foreign central banks and sovereign-wealth funds, which are big holders of Treasuries, might cool to buying many more if they believe prices are artificially high.

That may undermine the dollar. “There’s no guarantee that international investors would switch to other dollar- denominated debt if flushed from the Treasury market,” says Lou Crandall, chief economist at Wrightson ICAP LLC in Jersey City, New Jersey.

Tony Crescenzi, chief bond-market strategist at Miller Tabak & Co. in New York, says foreign investors might also get spooked if they conclude that the Fed is monetizing the government’s debt — in effect, printing money — by buying Treasuries.

Bernanke himself, in his 2003 speech, said monetization of the debt risked faster inflation — something bond investors, foreign or domestic, wouldn’t like.

Some economists argue the Fed would help the economy more if it bought other types of debt. Even after their recent rise, 10-year Treasury yields are still well below the 4.02 percent level at the start of last year.

Yields on investment-grade corporate bonds, in contrast, stood at 8.24 percent on Jan. 22, the latest date for which information is available, compared with 6.45 percent at the start of 2008, according to data compiled by the Fed.

Hawks at the Fed wouldn’t welcome such purchases. They are already uneasy that some of the central bank’s programs are effectively allocating credit to one part of the economy rather than others. Case in point: the Fed’s ongoing program to buy $500 billion of mortgage-backed securities, which Jeffrey Lacker, president of the Federal Reserve Bank of Richmond, has called “credit policy” rather than monetary policy.

J. Alfred Broaddus Jr., who was Richmond Fed president from 1993 to 2004, says the lesson from the early part of the decade isn’t that the Fed went too far in easing policy to avoid deflation — it’s that policy makers should have tightened more quickly afterwards and not allowed themselves to be boxed in by their pledge to keep interest rates low for a considerable period.

In the current context, that means buying bonds “is something worth looking at,” he says. Still, the Fed “needs to be careful and be ready to reverse course, especially given all the money that it’s pumped into the system.”

To contact the reporter on this story: Rich Miller in Washington at rmiller28@bloomberg.net