In a secret report last year, the Red Cross found evidence of the CIA using torture on prisoners that would make the Bush administration guilty of war crimes, The New York Times reported Friday.

The Red Cross determined the culpability of the Bush administration after interviewing prisoners at Guantanamo Bay, according to the article.

Prisoner Abu Zubaydahwho said he had been waterboarded, “slammed against the walls” and confined in boxes “so small he said he had to double up his limbs in the fetal position.”

The information comes from a new book written by Jane Meyer, who has frequently published articles concerning counter-terrorism in The New Yorker.

The book is titled “The Dark Side: The Inside Story of How the War on Terror Turned Into a War on American Ideals,” and will be released next week. 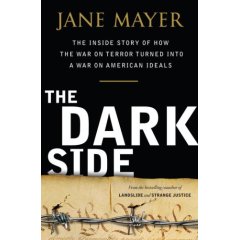 Mayer cited “sources familiar with the report” to explain the confidential document as a warning “that the abuse constituted war crimes, placing the highest officials in the U.S. government in jeopardy of being prosecuted.”

The report was submitted to CIA last year and concluded that American interrogation methods are “categorically” torture that violates both domestic and international law, MSNBC’s Rachel Maddow reported Friday.

Although the CIA had already admitted to the use of waterboarding, Meyer says in the book that several CIA officers confirm the findings of the Red Cross, including the other forms of torture mentioned.

Maddow called George W. Bush a “torture-approver-in-chief who has yet to be held to account for anything” and said that congressman Dennis Kucinich had reintroduced his articles of impeachment against the president.

“The problem for the bush admin is that they perfected plausible deniability techniques,” Turley said. “They bring out one or two people that are willing to debate on cable shows whether waterboarding is torture and it leaves the impression that its a closed question.

“It’s not. It’s just like the domestic surveillance program that the federal court said just a week ago was also not just a closed question.”

When asked by Maddow if the chances are now greater that Bush will be prosecuted now or after leaving office by the international community, Turley compared the situation to Serbia in the early 90s.