Volunteers have criticised the Red Cross charity after receiving a communication telling them to remove crucifixes from the walls of their branches as the organisation looks to become more secular.

The Belgian branches of the international aid organisation received an email from the Provincial Committee of the Red Cross in Liège to remove all crucifixes. André Rouffart, president of the Red Cross in Verviers, said: “We were asked to respect the principles of the Red Cross”, and not to distinguish between race or religious belief 7sur7 reports.

The group has publicly celebrated its work. But in fact, the Red Cross has repeatedly failed on the ground in Haiti. Confidential memos, emails from worried top officers, and accounts of a dozen frustrated and disappointed insiders show the charity has broken promises, squandered donations, and made dubious claims of success.

The Red Cross says it has provided homes to more than 130,000 people. But the actual number of permanent homes the group has built in all of Haiti: six.

Shall we call it the “European Spring” then?

The refugee crisis has not ended and a wave of 3-4 million people is expected to reach Europe in the spring.

This was stated by the chairperson of the Bulgarian Red Cross Hristo Grigorov in an interview for Focus news agency on the occasion of a round table entitled “Integration of refugees in Bulgaria: reality and challenges”.

– How the Red Cross Raised Half a Billion Dollars for Haiti ­and Built Six Homes (ProPublic, June 3, 2015):

The neighborhood of Campeche sprawls up a steep hillside in Haiti’s capital city, Port-au-Prince. Goats rustle in trash that goes forever uncollected. Children kick a deflated volleyball in a dusty lot below a wall with a hand-painted logo of the American Red Cross.

In late 2011, the Red Cross launched a multimillion-dollar project to transform the desperately poor area, which was hit hard by the earthquake that struck Haiti the year before. The main focus of the project — called LAMIKA, an acronym in Creole for “A Better Life in My Neighborhood” — was building hundreds of permanent homes.

MANILA — The powerful typhoon that swept across the Philippines on Friday cut a path of destruction though several central islands, leaving the seaside city of Tacloban in ruins and leading to early, unconfirmed estimates of at least 1,200 dead.

Strong winds from the typhoon hit a coastal town in Laguna Province. More than 700,000 evacuated ahead of the storm.

Although the government said it could confirm only about 140 deaths so far, the Red Cross in Manila said its people on the ground were reporting an estimated 1,000 deaths on Leyte Island, where Tacloban is, and about 200 from the neighboring island of Samar.

Welcome to the global recovery folks. A recovery that is so strong in the UK, the Red Cross has been called in to provide food aid for the first time since World War II. Nothing spells happy days are here again like that sort of news.

Oh, didn’t participate in the global recovery? No worries, oligarchs have got you covered and will happily offer you a piece of bread in between flat purchases in the City of London so that you remain quietly and apathetically planted squarely in front of the television . The “recovery” was and is a gigantic heist. Nothing more, nothing less.

The Red Cross will this winter start collecting and distributing food aid to the needy in Britain for the first time since the Second World War, as welfare cuts and the economic downturn send soaring numbers of people to soup kitchens and food banks across Europe.

In what could be the start of an increased role in Britain for the Geneva-based charity best known for its work in disaster zones, its volunteers will be mobilised to go into supermarkets across the country at the end of November and ask shoppers to donate dry goods. The British Red Cross will then help FareShare, a charity working with the Trussell Trust and Tesco, distribute the packets and tins to food banks nationwide.

Britain is just one of many countries where families are struggling to put food on the table. In a report released today into the devastating humanitarian impact of Europe’s financial  crisis, the Red Cross recorded a 75 per cent increase in the number of people relying on their food aid over the last three years. At least 43 million people across the Continent are not getting enough to eat each day and 120 million are at risk of poverty.

– Red Cross Team said “We were told by headquarters not to provide medical care for those exposed to radiation” after 3/11 -Hospital Worker (ENENews, July 28, 2012):

Please let me explain about what happened immediately after the earthquake.

On March 11, 2011, we began to have more and more evacuees from Futaba-machi.

We accepted both inpatients and outpatients without any manual or instruction for medical care for radiation exposure. However, Fukushima University Medical School Hospital only accepted the seriously injured (essentially refusing to accept evacuees) and the Red Cross medical team said “we were told by the headquarters not to provide medical care for those exposed to radiation.”

They stayed for three days, but the Red Cross medical team went to another prefecture without seeing any patients. 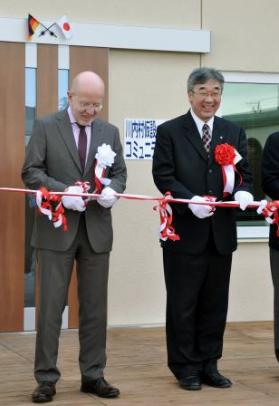 I’m not really sure that’s how German people who donated to the German Red Cross for the disaster relief for the March 11 earthquake/tsunami wanted the money to be spent.

The library and the nursery school are for people evacuated from Kawauchi-mura in a planned evacuation zone to Koriyama City. Koriyama City is in high-radiation “nakadori” (middle third) of Fukushima Prefecture, where pre-schoolers were found with 0.11 millisievert external radiation in one month in November 2011, with the maximum 0.66 millisievert. Certainly not a place where any nursery school should be.

But the donation from Germany was used to build a facility to keep the villagers from Kawauchi-mura in Koriyama City together.

(The photo is the German embassy official Claus Eilrich with Kawauchi-mura’s village chief in the tape-cutting ceremony.)

A facility with the library room and the nursery school opened on January 6 in the temporary housing in Koriyama City in Fukushima Prefecture where the residents from Kawauchi-mura lives after having evacuated from their home after the nuclear accident. The facility was built with the money of about 40 million yen (about 408,000 euro, US$520,000) donated via the German Red Cross. 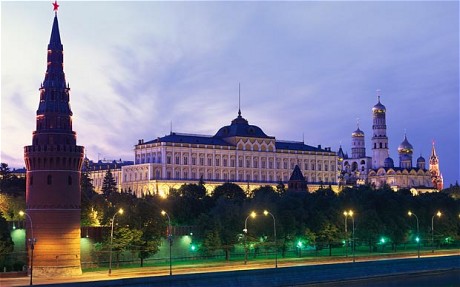