– HAITI EARTHQUAKE CAUSED BY US MILITARY?

– Former Haitian Senate President Calls Clintons “Common Thieves Who Should Be In Jail”:

Despite repeatedly bragging about all the good work the Clinton Foundation did to help Haiti recover from the devastating 2010 earthquake, at least one Haitian, former Senate President Bernard Sansaricq, thinks it was the Clintons, not the Hiatian people, who benefitted most from the Foundation’s “charitable work” in Haiti.  Appearing on a radio show last week, Sansaricq offered a scathing assessment of the Clinton’s track record in Haiti saying they are “nothing but common thieves…and they should be in jail.”  Per PJ Media:

Sandy Rios of American Family Radio interviewed former Haitian Senate President Bernard Sansaricq on Thursday, and the enraged Haitian had nothing good to say about the Clintons. He angrily claimed that they brought their “pay to play” politics to Haiti at the expense of the Haitian people. 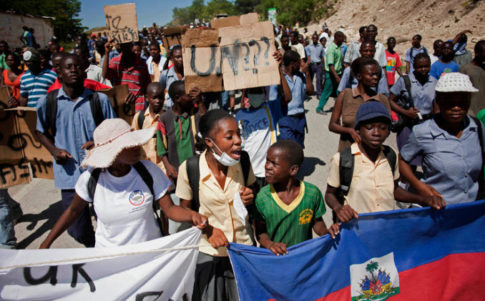 – Haiti: Time for Clinton and Co to Pack and Go

– How the Clinton Foundation Got Rich off Poor Haitians:

It filtered money through Haiti and back to itself.

In January 2015 a group of Haitians surrounded the New York offices of the Clinton Foundation. They chanted slogans, accusing Bill and Hillary Clinton of having robbed them of “billions of dollars.” Two months later, the Haitians were at it again, accusing the Clintons of duplicity, malfeasance, and theft. And in May 2015, they were back, this time outside New York’s Cipriani, where Bill Clinton received an award and collected a $500,000 check for his foundation. “Clinton, where’s the money?” the Haitian signs read. “In whose pockets?” Said Dhoud Andre of the Commission Against Dictatorship, “We are telling the world of the crimes that Bill and Hillary Clinton are responsible for in Haiti.”

Read moreHow The Clinton Foundation Got Rich Off Poor Haitians

The group has publicly celebrated its work. But in fact, the Red Cross has repeatedly failed on the ground in Haiti. Confidential memos, emails from worried top officers, and accounts of a dozen frustrated and disappointed insiders show the charity has broken promises, squandered donations, and made dubious claims of success.

The Red Cross says it has provided homes to more than 130,000 people. But the actual number of permanent homes the group has built in all of Haiti: six.

– How the Red Cross Raised Half a Billion Dollars for Haiti ­and Built Six Homes (ProPublic, June 3, 2015):

The neighborhood of Campeche sprawls up a steep hillside in Haiti’s capital city, Port-au-Prince. Goats rustle in trash that goes forever uncollected. Children kick a deflated volleyball in a dusty lot below a wall with a hand-painted logo of the American Red Cross.

In late 2011, the Red Cross launched a multimillion-dollar project to transform the desperately poor area, which was hit hard by the earthquake that struck Haiti the year before. The main focus of the project — called LAMIKA, an acronym in Creole for “A Better Life in My Neighborhood” — was building hundreds of permanent homes.

Once more, we have tasted salt. We have mourned our dead from the earthquake and the cholera epidemic. The collective depression, the temporary zombification has lifted. It is time to evict the occupier and pursue the traitors and enemies of our independence. No exception.

This is not the first time the United States has occupied Haiti and been evicted from it. The first occupation began during the administration of the questionable Nobel Peace Prize laureate President Woodrow Wilson in 1915. It was countered by an armed insurrection that grew to include over 40,000 Haitian fighters who regularly engaged the US marines. Although this insurrection was ultimately crushed, it was followed by numerous popular strikes in Haiti as well as calls in the US by women’s groups and Black Americans to end the occupation. The return to sovereignty was relatively simple: a committee was assembled to organize legislative and presidential elections. The occupation formally ended in 1934, near the start of the presidency of Franklin Delano Roosevelt, who personally came for a flag-raising ceremony in Haiti to recognize its independence.

Read moreHaiti: Time for Clinton and Co to Pack and Go

– WIKILEAKS: US Fought To Lower Minimum Wage In Haiti So Hanes And Levis Would Stay Cheap (Business Insider, June 3, 2011):

A Wikileaks post published on The Nation shows that the Obama Administration fought to keep Haitian wages at 31 cents an hour.

(This article was taken down by The Nation due to an embargo, but it was excerpted at Columbia Journalism Review.)

It started when Haiti passed a law two years ago raising its minimum wage to 61 cents an hour. According to an embassy cable:

This infuriated American corporations like Hanes and Levi Strauss that pay Haitians slave wages to sew their clothes. They said they would only fork over a seven-cent-an-hour increase, and they got the State Department involved. The U.S. ambassador put pressure on Haiti’s president, who duly carved out a $3 a day minimum wage for textile companies (the U.S. minimum wage, which itself is very low, works out to $58 a day).

Haiti has about 25,000 garment workers. If you paid each of them $2 a day more, it would cost their employers $50,000 per working day, or about $12.5 million a year … As of last year Hanes had 3,200 Haitians making t-shirts for it. Paying each of them two bucks a day more would cost it about $1.6 million a year. Hanesbrands Incorporated made $211 million on $4.3 billion in sales last year.

Thanks to U.S. intervention, the minimum was raised only to 31 cents.