– French minister criticizes US aid role in Haiti: ‘This is about helping Haiti, not about occupying Haiti.’

– Ex-minister warns of US ‘takeover’ of Haiti

I am not saying that Hugo Chavez is right, but I know that the US and the Russians have weapons that could easily cause such an earthquake.

Venezuelan leader Hugo Chavez has once again accused the United States of playing God. But this time it’s Haiti’s disastrous earthquake that he thinks the U.S. was behind. Spanish newspaper ABC quotes Chavez as saying that the U.S. navy launched a weapon capable of inducing a powerful earthquake off the shore of Haiti. He adds that this time it was only a drill and the final target is … destroying and taking over Iran.

I also know that the elite plans to invade Iran within the next 3 years to cause WW III. The elite constantly changes their plans and adapts them to the ‘environment’ very quickly. Call me a conspiracy nutcase, I don’t care. I know it. So maybe Chavez is right. 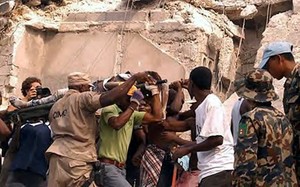 A major part of the Haitian disaster operation is providing security for victims and rescuers.

About 20,000 U.S. troops are expected to support relief efforts in Haiti by next week in addition to the 13,000 American military personnel already there, according to Pentagon spokesman John Kruzel.

Those men and women to be deployed are members of the 22nd Marine Expeditionary Unit, the 82nd Airborne Division’s 2nd Brigade and other units. Thousands of other troops are operating afloat off the Haitian coast and on shore, distributing provisions, assisting in medical operations and helping to maintain security. Some 2,200 Marines of the 24th Marine Expeditionary Unit are slated to arrive within 48 hours, Kruzel reports.

“The 24th Marine Expeditionary Unit is a huge part of enabling us to extend our reach to places around the country that may need our assistance but we just haven’t been there yet,” Army Lieutenant General P.K. Keen, the top U.S. commander in Haiti, said on Thursday during a segment aired on The Pentagon Channel.

The additional forces come as international aid continues pouring into Haiti following a magnitude 7 earthquake that struck Jan. 12, creating what an official called one of the greatest humanitarian emergencies in the history of the Americas, reports Kruzel, in a statement obtained by the National Association of Chiefs of Police.

About 2,000 Marines of the 22nd Marine Expeditionary Unit that came ashore earlier this week have zeroed in on an area west of Port-au-Prince where much of the larger destruction occurred, according to Air Force General Douglas Fraser, the commander of U.S. Southern Command.

In the meantime, some 1,400 flights are waiting to land at the congested Toussaint Louverture International Airport in the capital of Port-au-Prince, where the United States is overseeing upwards of 140 flights daily as officials look to open additional airfields, Fraser told Pentagon reporters yesterday. Reports of bottlenecking at the airport have emerged as its capacity has swelled from an average of 13 commercial aircraft daily arrivals before the quake.

As of Tuesday, an airport about 30 miles southeast of the Haitian capital in the city of Jacmel became operational in addition to the San Isidro airport in neighboring Dominican Republic, where officials are looking to open a third airport in Maria Montez, Kruzel said.

Officials say the disaster has killed between 100,000 to 200,000 people and the Red Cross estimates some 3 million people have been affected. To date, the United States has delivered 1.4 million bottles of water, 700,000 meals and 22,000 pounds of medical equipment, which are being disbursed among some 100 distribution sites, Fraser said.

While the cost of relief efforts is difficult to estimate given its scope, Fraser placed the figure at $100 million. The Defense Department pledged up to $20 million in emergency relief funds in days for Haiti, and sprang troops into action following the quake.

Off the Haitian coast are 20 U.S. ships, with the floating hospital vessel USNS Comfort among them, adding medical capabilities and supplying about 600 medical personnel and 1,000 desperately needed hospital beds. As of yesterday, roughly 270 U.S. medical personnel on the ground had treated more than 5,100 people in Haiti.

He’s former chief at a New York City housing project in Washington Heights nicknamed “Crack City” by reporters covering the drug war in the 1980s. In addition, he served as director of public safety at a New Jersey university and director of security for several major organizations. He’s also served on the National Drug Task Force and trained police and security officers throughout the country. Kouri writes for many police and security magazines including Chief of Police, Police Times, The Narc Officer and others. He’s a news writer and columnist for AmericanDaily.Com, MensNewsDaily.Com, MichNews.Com, and he’s syndicated by AXcessNews.Com. Kouri appears regularly as on-air commentator for over 100 TV and radio news and talk shows including Fox News Channel, Oprah, McLaughlin Report, CNN Headline News, MTV, etc.