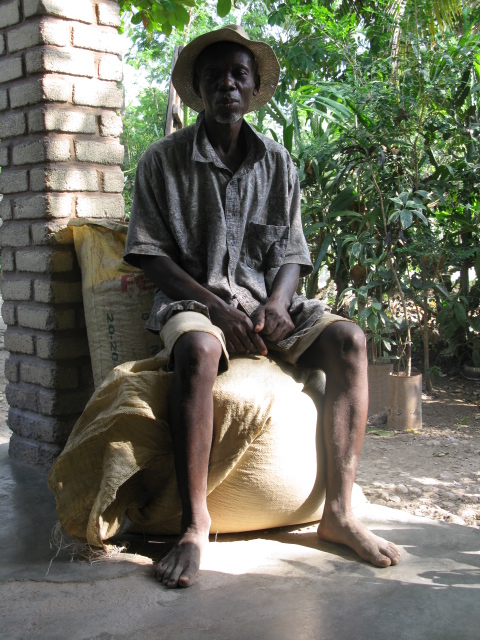 Jonas Deronzil from Verrettes has been farming since 1974. Like small producers throughout Haiti, his meager income from corn, rice, and beans is threatened by new competition from Monsanto.

“A new earthquake” is what peasant farmer leader Chavannes Jean-Baptiste of the Peasant Movement of Papay (MPP) called the news that Monsanto will be donating 60,000 seed sacks (475 tons) of hybrid corn seeds and vegetable seeds, some of them treated with highly toxic pesticides. The MPP has committed to burning Monsanto’s seeds, and has called for a march to protest the corporation’s presence in Haiti on June 4, for World Environment Day.

In an open letter sent of May 14, Chavannes Jean-Baptiste, the Executive Director of MPP and the spokesperson for the National Peasant Movement of the Congress of Papay (MPNKP), called the entry of Monsanto seeds into Haiti “a very strong attack on small agriculture, on farmers, on biodiversity, on Creole seeds…, and on what is left our environment in Haiti.”[1] Haitian social movements have been vocal in their opposition to agribusiness imports of seeds and food, which undermines local production with local seed stocks. They have expressed special concern about the import of genetically modified organisms (GMOs).

Elizabeth Vancil, Monsanto’s Director of Development Initiatives, called the news that the Haitian Ministry of Agriculture approved the donation “a fabulous Easter gift” in an April email.[2]  Monsanto is known for aggressively pushing seeds, especially GMO seeds, in both the global North and South, including through highly restrictive technology agreements with farmers who are not always made fully aware of what they are signing. According to interviews by this writer with representatives of Mexican small farmer organizations, they then find themselves forced to buy Monsanto seeds each year, under conditions they find onerous and at costs they sometimes cannot afford.

The hybrid corn seeds Monsanto has donated to Haiti are treated with the fungicide Maxim XO, and the calypso tomato seeds are treated with thiram.[3]  Thiram belongs to a highly toxic class of chemicals called ethylene bisdithiocarbamates (EBDCs). Results of tests of EBDCs on mice and rats caused concern to the U.S. Environmental Protection Agency (EPA), which then ordered a special review. The EPA determined that EBDC-treated plants are so dangerous to agricultural workers that they must wear special protective clothing when handling them. Pesticides containing thiram must contain a special warning label, the EPA ruled. The EPA also barred marketing of the chemicals for many home garden products, because it assumes that most gardeners do not have adequately protective clothing.[4]  Monsanto’s passing mention of thiram to Ministry of Agriculture officials in an email contained no explanation of the dangers, nor any offer of special clothing or training for those who will be farming with the toxic seeds.

Haitian social movements’ concern is not just about the dangers of the chemicals and the possibility of future GMO imports. They claim that the future of Haiti depends on local production with local food for local consumption, in what is called food sovereignty. Monsanto’s arrival in Haiti, they say, is a further threat to this.

“People in the U.S. need to help us produce, not give us food and seeds.  They’re ruining our chance to support ourselves,” said farmer Jonas Deronzil of a peasant cooperative in the rural region of Verrettes.[5]

Monsanto’s history has long drawn ire from environmentalists, health advocates, and small farmers, going back to its production of Agent Orange during the Vietnam war. Exposure to Agent Orange has caused cancer in an untold number of U.S. Veterans, and the Vietnamese government claims that 400,000 Vietnamese people were killed or disabled by Agent Orange, and 500,000 children were born with birth defects as a result of their exposure.[6]

Monsanto’s former motto, “Without chemicals, life itself would be impossible,” has been replaced by “Imagine.” Its web site home page claims it “help[s] farmers around the world produce more while conserving more. We help farmers grow yield sustainably so they can be successful, produce healthier foods… while also reducing agriculture’s impact on our environment.”[7] The corporations’ record does not support the claims.

Together with Syngenta, Dupont and Bayer, Monsanto controls more than half of the world’s seeds.[8] The company holds almost 650 seed patents, most of them for cotton, corn and soy, and almost 30% of the share of all biotech research and development. Monsanto came to own such a vast supply by buying major seed companies to stifle competition, patenting genetic modifications to plant varieties, and suing small farmers. Monsanto is also one of the leading manufacturers of GMOs.

As of 2007, Monsanto had filed 112 lawsuits against U.S. farmers for alleged technology contract violations or GMO patents, involving 372 farmers and 49 small agricultural businesses in 27 different states. From these, Monsanto has won more than $21.5 million in judgments. The multinational appears to investigate 500 farmers a year, in estimates based on Monsanto’s own documents and media reports.[9]

In Colombia, Monsanto has received upwards of $25 million from the U.S. government for providing Roundup Ultra in the anti-drug fumigation efforts of Plan Colombia. Roundup Ultra is a highly concentrated version of Monsanto’s glyphosate herbicide, with additional ingredients to increase its lethality. Colombian communities and human rights organizations have charged that the herbicide has destroyed food crops, water sources and protected areas, and has led to increased incidents of birth defects and cancers.

Vía Campesina, the world’s largest confederation of farmers with member organizations in more than sixty countries, has called Monsanto one of the “principal enemies of peasant sustainable agriculture and food sovereignty for all peoples.”[11]  They claim that as Monsanto and other multinationals control an ever larger share of land and agriculture, they force small farmers out of their land and jobs. They also claim that the agribusiness giants contribute to climate change and other environmental disasters, an outgrowth of industrial agriculture.[12]

The Vía Campesina coalition launched a global campaign against Monsanto last October 16, on International World Food Day, with protests, land occupations, and hunger strikes in more than twenty countries. They carried out a second global day of action against Monsanto on April 17 of this year, in honor of Earth Day.

Non-governmental organizations in the U.S. are challenging Monsanto’s practices, too. The Organic Consumers Association has spearheaded the campaign “Millions Against Monsanto,” calling on the company to stop intimidating small family farmers, stop marketing untested and unlabeled genetically engineered foods to consumers, and stop using billions of dollars of U.S. taypayers’ money to subsidize GMO crops.[13]

The Center for Food Safety has led a four-year legal challenge to Monsanto that has just made it to the U.S. Supreme Court. After successful litigation against Monsanto and the U.S. Department of Agriculture for illegal promotion of Roundup Ready Alfalfa, the court heard the Center for Food Safety’s case on April 27. A decision on this first-ever Supreme Court case about GMOs is now pending.[14]

“Fighting hybrid and GMO seeds is critical to save our diversity and our agriculture,” Jean-Baptiste said in an interview in February. “We have the potential to make our lands produce enough to feed the whole population and even to export certain products. The policy we need for this to happen is food sovereignty, where the county has a right to define it own agricultural policies, to grow first for the family and then for local market, to grow healthy food in a way which respects the environment and Mother Earth.”

Many thanks to Moira Birss for her assistance with research and writing.