How will things look like in the coming financial-economic collapse in America (and Europe)? 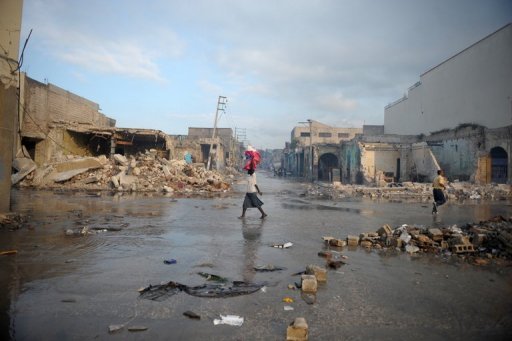 WASHINGTON — An Amnesty report laid bare Wednesday horrific accounts of rape in Haiti’s squalid refugee camps a year after a devastating quake left many struggling to rebuild their shattered lives.

They are women like Guerline, who two months after losing her husband when their home crumbled to the ground in the devastating quake, had to watch as her teenage daughter was raped in a makeshift tarpaulin camp in Port-au-Prince.

“Four men raped her. She is 13 years old,” Guerline told Amnesty International researchers, who compiled the report after interviewing more than 50 women and girls in Haiti’s post-quake camps.

“I’m scared. There is nowhere safe where I can live, so I had to keep quiet,” said Guerline, who, like all the women interviewed for the report, was given a false name to protect her from reprisals.

Guerline was raped on the same night as her daughter by hooded men in the tent city. She can’t get the events of that terrible night out of her head.

Amnesty said little is being done to help her and other victims of rape and sexual violence, old woes for Haiti that worsened after the earthquake killed over 230,000 people, injured 300,000 others and flattened large tracts of the capital.

The destruction and death meant many women and girls lost the family and community networks that used to shield them from the threats they now face. Precarious living conditions in the camps further worsened their already dire situation.

“The lack of security in and around the camps is one of the main factors contributing to sexual and other forms of gender-based violence,” the report said.

But the government, which was also crippled by the quake that brought down the presidential palace and scores of other official buildings, has made little progress in resettling Haitians or ensuring they are not in danger in the camps.

A year after the quake, some 1.05 million Haitians still live in 1,200 such camps. Most of those displaced by the quake are women.

“There is no security for women and girls in the camps,” said Gerardo Ducos, Amnesty International’s lead Haiti researcher.

“Armed gangs attack at will, safe in the knowledge that there is little prospect that they will be brought to justice.”

Most rape victims are assaulted by armed men and gangs of youths who roam the poorly lit, overcrowded camps after dark.

Few of the rapes are reported to the police or health authorities, either because the victims fear reprisals or because they don’t know who to turn to for help.

Women who did report a rape to the authorities said they were either told that nothing could be done for them, or were asked to pay the police — with money they don’t have — for inquiries.

As a result, few of the women’s attackers are ever brought to justice and they continue to prey on women and girls with impunity, the report said.

Myriam was raped when she was 11.

Marie was raped by three men just steps from the main police station in Port-au-Prince.

Suzie was gang-raped in front of her children.

“Women victims of rape should go to hospital, but I didn’t go because I didn’t have any money,” she told Amnesty.

“I don’t know where there is a clinic offering medical treatment for victims of violence,” Suzie said, unaware that the Haitian government runs a program for victims of rape, mostly free of charge, at Port-au-Prince’s general hospital, which is a 15-minute walk away from where she was raped.

Marie said she would have “loved to go to the police but they don’t listen to what you are saying”.

And Myriam’s aunt, who has been her guardian since the little girl’s mother went missing during the quake, didn’t take the young victim to hospital “because you need money”.

She didn’t go to the police because she didn’t know who had raped her niece.

“The only thing I do is go to church and pray,” she said.

The grassroots Commission of Women Victims for Victims, a women’s group run by survivors of sexual violence, registered more than 250 cases of rape in several camps in the five months after the quake, but Amnesty believes that number is just the tip of the iceberg.