– US doctors beg their government to admit critically injured children from Haiti (Times):

“We can’t evacuate any Haitian patients to the US,” John McDonald, from the University of Miami Medical School, said. “Our country treats the Haitians like s***. The people land, they get sent back. When Cubans land, they open restaurants.”

Another doctor at the tented clinic said that she was so desperate at being forced to discharge children still in grave danger of dying from infection that she wanted to “scream and scratch people”. For want of bed space “we are sending wounded children back on to the streets of Port-au-Prince with no plan even for how they will be fed,” said Jennifer Furn, from Harvard Medical School.

Dr Furn’s task was complicated by instructions from the UN to vacate the tents by 8am yesterday. “The UN say they need these tents as a staging post for regular personnel,” Dr Furn said. “It’s breaking my heart. How can I send children with wounds and head bandages out into the streets?”

– French minister criticizes US aid role in Haiti: ‘This is about helping Haiti, not about occupying Haiti.’ (AP)

So this is ‘full American support’???

I could have uploaded HORRIBLE pictures piled up with corpses, but choose not to, because I want you to be able to get some sleep. 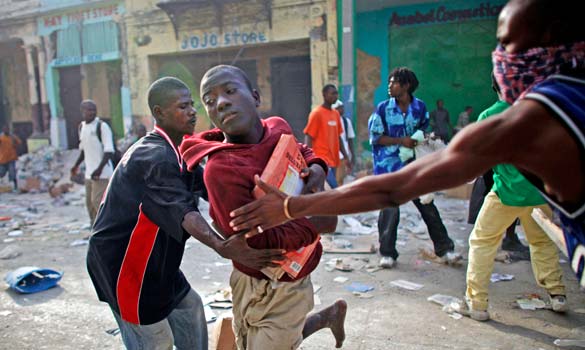 As the UN defers decision-making to an almost non-existent Haitian Government, looting is rife. One woman was reported to have been decapitated

Five days after a 7.0 magnitude quake killed up to 200 000 people, international rescue teams clawed away at the rubble of collapsed buildings in the wrecked capital, Port-au-Prince, in a race against time to find more survivors.

But logistical logjams kept major relief from reaching the hundreds of thousands of hungry Haitians waiting for help, many of them sheltering in makeshift camps on streets strewn with debris and decomposing bodies.

Footage of the earthquake’s aftermath. Contains disturbing images Link to this video

René Préval, the president of Haiti, has described the devastation after last night’s earthquake as “unimaginable” as governments and aid agencies around the world rushed into action.

Préval described how he had been forced to step over dead bodies and heard the cries of those trapped under the rubble of the national parliament. “Parliament has collapsed. The tax office has collapsed. Schools have collapsed. Hospitals have collapsed,” he told the Miami Herald. “There are a lot of schools that have a lot of dead people in them.” Préval said he thought thousands of people had died in the quake.

A 7.0 magnitude quake – the biggest recorded in this part of the Caribbean and the largest to hit Haiti in more than 200 years – rocked Port-au-Prince, destroying a hospital and sending houses tumbling into ravines.