– Former Haitian Senate President Calls Clintons “Common Thieves Who Should Be In Jail”:

Despite repeatedly bragging about all the good work the Clinton Foundation did to help Haiti recover from the devastating 2010 earthquake, at least one Haitian, former Senate President Bernard Sansaricq, thinks it was the Clintons, not the Hiatian people, who benefitted most from the Foundation’s “charitable work” in Haiti.  Appearing on a radio show last week, Sansaricq offered a scathing assessment of the Clinton’s track record in Haiti saying they are “nothing but common thieves…and they should be in jail.”  Per PJ Media:

Sandy Rios of American Family Radio interviewed former Haitian Senate President Bernard Sansaricq on Thursday, and the enraged Haitian had nothing good to say about the Clintons. He angrily claimed that they brought their “pay to play” politics to Haiti at the expense of the Haitian people.

“They are nothing but common thieves,” the enraged Sansaricq told Rios. “And they should be in jail.”

As also highlighted in the movie “Clinton Cash,” Sansaricq argued that the Clinton’s did nothing more than bring their pay-to-play tactics to Haiti resulting in the enrichment of Clinton cronies, including Hillary’s brother Anthony Rodham, whose company was awarded a lucrative gold mining contract.

Sansaricq said although Bill Clinton was put in charge of the reconstruction, he did absolutely nothing but give contracts to his cronies and built a sweatshop next to a goldmine that was given to Hillary Clinton’s brother, Anthony Rodham, in violation of the Haitian constitution.

He said he could go on for hours about the Clinton Foundation’s destruction of the rice production in Haiti because they were importing rice from Clinton’s cronies in Arkansas. And rice is something Haiti could really use right now.

The Clintons also awarded the country’s only cell phone company to another crony, Denis O’Brien, using taxpayer dollars. O’Brien has made 265 million dollars, and a substantial portion of that  has gone back to the Clinton Foundation.

Of course, these claims are hard to deny given that recently released emails, obtained through a Freedom of Information Act (FOIA) lawsuit by the Republican National Committee, and subsequently shared with ABC News, reveal very open special treatment of “Friends of Bill” (“FOB” for short) by the State Department in granting access to recovery efforts in Haiti, in which $10 billion in emergency aid was spent after the 2010 earthquake.

The emails showed very close coordination between Caitlin Klevorick, a senior State Department official, and Amitabh Desai, the director of foreign policy for the Clinton Foundation, as they exchanged emails from Foundation donors looking to participate in the Haiti recovery efforts.  While many donors likely were just looking to make charitable contributions, others, as evidenced below, were simply looking to capture their “fair share” of $10 billion in emergency aid contracts doled out by the U.S. government.

The following exchange between Klevorick and Dasai, with the subject line “Haiti Assistance,” shows the State Department very clearly asking for “Friends of Bill” to be flagged for special consideration.

“Need you to flag when people are friends of WJC,” wrote Caitlin Klevorick, then a senior State Department official who was juggling incoming offers of assistance being funneled to the State Department by the Clinton Foundation. “Most I can probably ID but not all.”

Of course, this directly contradicts comments that Bill Clinton previously made to CBS’ Charlie Rose just last month when he assured voters that “nothing was ever done for anybody because they were contributors to the foundation, nothing.”

In another Klevorick and Dasai exchange, the State Department official asks “Is this a FOB!” saying that “If not, she should go to cidi.org” (a general government website). 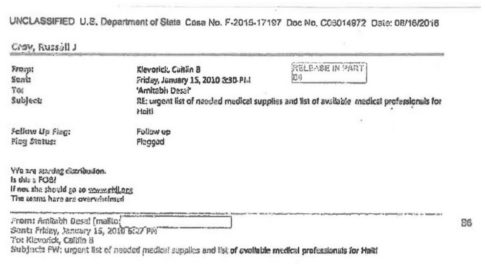 As also mentioned by Sansaricq, another series of messages uncovered the efforts of billionaire Denis O’Brien, a longtime donor to the Clinton Foundation and the CEO of the Jamaica-based telecom firm Digicel, to fly relief supplies into Port-au-Prince and get employees of his company out.  But when O’Brien couldn’t get access to land in Port-au-Prince “through conventional channels” he turns to long-time Clinton aide Doug Band for help.  Shortly thereafter, the request was elevated to the State Department in an email with the subject line “Close friend of the Clintons.”

“This WJC VIP just called again from Jamaica to say Digicel is being pushed by US Army to get comms back up but is not being cleared by [the U.S. government] to deploy into Haiti to do so,” Desai wrote in an email with the subject line “Close friend of Clintons.”

Later, O’Brien writes to longtime Clinton aide Doug Band to express frustration. “We’re finding it impossible to get landing slots,” he says. “I’m sorry to bother you but I am not making any progress through conventional channels.”

Band tasks Desai to “pls get on this,” telling O’Brien, “Never a bother.”

Desai then turns to Klevorick to help “a friend of President Clinton,” and the request is pushed up the chain of command to USAID officials organizing the relief effort.

Of course, we have no doubt that these scandalous revelations, like many others circling the Clinton campaign at the moment, will quickly be brushed under the carpet so the mainstream media can go back to focusing on Trump’s “accusers”.