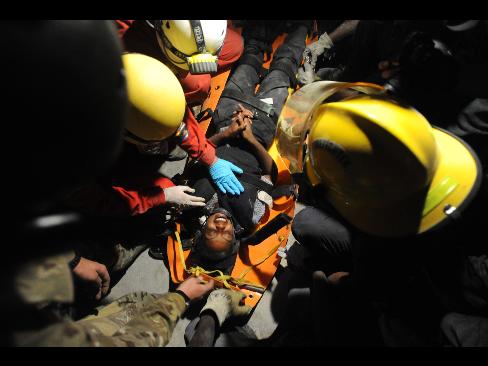 French rescuers work on a victim in a collapsed building, one week after the earthquake in Port-au-Prince, on Jan. 19, 2010. Photographer: Juan Barreto/AFP/Getty Images

Jan. 20 (Bloomberg) — An earthquake measuring 6.1 struck Haiti today, eight days after the devastating temblor that may have killed more than 200,000 people, the U.S. Geological Survey said.

The quake was centered 59 kilometers (36 miles) to the west-southwest of the capital Port-au-Prince at a depth of 9 kilometers, the USGS said in a preliminary e-mailed report. It struck at 6:03 a.m. local time, the USGS said.

Rescue workers with the New York police and fire departments reported “violent shaking” from the tremor yet were able to continue working, according to an e-mailed statement from the police department. The 76-member team, which includes four police dogs, pulled two children alive from the rubble of a brick building last night.

Buildings shook in Port-au-Prince and people fled to the streets, the Associated Press reported. The Pacific Tsunami Warning Center said the earthquake was located too far inland to generate any tidal waves in the Caribbean, AP said.

“We felt the quake but it wasn’t too bad,” said Tamar Hahn, an aid worker with the United Nations Children’s Fund, in an interview on Argentina’s C5N television. “They say it was a 6.1 but it didn’t feel so strong.”

Agence France-Presse said that a crashing sound suggested an already damaged building may have collapsed. AP said wails of terror rose from frightened survivors of the earlier quake as people poured out of unstable buildings.

The latest quake struck as the U.S. dispatched more naval ships to help clear Haiti’s ports and speed up supplies of food, water and medicine to victims of the Jan. 12 earthquake while rescuers extended the search for survivors.

U.S. and United Nations troops and rescue teams have stepped up relief efforts in Haiti as relatives of those still missing from the 7.0-magnitude temblor of Jan. 12 begged them to keep up the search. Rescuers had saved 121 people as of late yesterday night in New York, the United Nations humanitarian affairs office said.

More than 72,000 bodies have been buried and many more have been removed from rubble and will likely never be counted, Prime Minister Jean-Max Bellerive said in an interview with CNN. More than 1.5 million people are homeless, the European Commission said in a statement on its Web site, citing the Haitian government.

“We will never know what the death toll was,” Edmond Mulet, head of the UN mission in Haiti, said in a videoconference.

A 23-day-old baby girl named Elisabeth was pulled from the rubble of a house in Jacmel, a town in southern Haiti, AFP reported. She appeared to be healthy and was taken to a U.S.-run hospital. A 25-year-old woman was pulled from a collapsed shopping center in the capital following a nine-hour search, AFP reported.

The UN Security Council yesterday raised the authorized strength of its peacekeeping force in Haiti by 3,500 soldiers and civilian police to increase security for relief efforts and speed aid. The quake damaged roads, the port and the country’s only international airport, hampering efforts to get relief supplies moving.

The Security Council voted unanimously to adopt a U.S.- drafted resolution that will reinforce about 7,000 soldiers and 2,000 police officers already in Haiti. Alain LeRoy, head of UN peacekeeping, said the personnel will be used to secure aid corridors in the capital, Port-au-Prince, and routes from northern ports and the neighboring Dominican Republic.

The move will enlarge the UN force in Haiti by almost 40 percent amid concern that food, water and medicine haven’t reached victims quickly enough since the first earthquake struck. The U.S. bolstered its presence in the country and offshore to 11,000 soldiers and sailors yesterday, with troops landing at the ruins of the presidential place.

“These are extraordinary times that call for extraordinary measures and extraordinary decisiveness,” UN Secretary-General Ban Ki-moon told reporters after the vote. “The Security Council sent a clear signal that the world is with Haiti. We are making rapid progress despite extremely difficult challenges.”

The 40 medical professionals and support staff will leave Japan as early as tomorrow to relieve a team in Leogane city, 40 kilometers west of Port-au-Prince, Hirano said. Japan will also triple the number of logistics personnel to 30, the defense ministry said.

International Committee of the Red Cross staff have reached Leogane for the first time. “Leogane was severely damaged by last Tuesday’s earthquake and the people there urgently need assistance,” Philippe David, the ICRC’s health coordinator in Haiti, said in a statement. “We are setting up first-aid posts in the areas hardest hit by the earthquake and plan to step up our medical assistance in Leogane in the coming days.”

An ICRC-chartered airplane carrying 36 metric tons of water and sanitation equipment as well as medical items left Geneva yesterday for the Dominican Republic. From there, the cargo will be taken by road to Port-au-Prince. A second plane carrying 2,500 family kits, containing essential items such as blankets, kitchen sets and plastic sheeting for temporary shelter, is due to leave Panama for the Dominican Republic in the coming days.

A German television appeal for funds to help victims of the earthquake that aired last night has so far raised more than 20 million euros ($28 million), the newspaper Bild said in a faxed statement. Siemens AG and Volkswagen AG were among companies that each pledged 1 million euros, according to Bild, which organized the appeal together with ZDF television.

To contact the reporter on this story: Thomas Penny in London at tpenny@bloomberg.net; Bill Faries in Buenos Aires at wfaries@bloomberg.net.