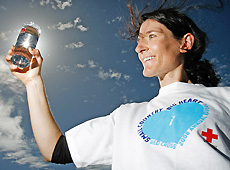 Victoria Fray with a glass of drinking water made with her new desalination machine. Photo / Greg Bowker

Auckland engineer Victoria Fray has come up with a new variation on the age-old theme of teaching someone to fish so they can feed themselves forever.

She has designed a mini-desalination plant that is small and robust enough to be sent to remote Pacific islands to provide water for up to 900 people in an emergency – then be hauled back to Auckland and used again in the next disaster elsewhere.

The device meets a specific need for tiny, isolated islands and is not expected to be of any use in New Zealand.

“It can convert 3000 litres of water a day. That’s enough for emergency use for a small village of 900 people,” said the New Zealand manager of the Red Cross’s humanitarian programme, Glenn Rose.

“The Red Cross didn’t have anything on this scale. We have desalination appliances and very large-scale modules to provide water for up to 40,000 people. This is specifically to suit the needs of the Pacific Islands.”

“I usually get 48 hours’ notice,” she said. “I go and speak nicely to my boss and ask to take three weeks or a month off work. He always lets me go.”

On her first mission, she was sent to the small island of Ambae in Vanuatu when Mt Manaro began erupting ash just before Christmas in 2004.

“They had evacuated people from their villages into safe centres. They knew where the lahar paths were and which areas were safe,” she said.

“Ash was the concern. To a New Zealander, I was thinking of Mt Ruapehu erupting a few years ago, but it wasn’t like that, there wasn’t that much ash fallout. But the locals were terrified.”

Her mission was to set up a small desalination plant for one of the safe centres, and the Red Cross had sent up a small unit which it bought off the shelf in Auckland, of the kind usually sold for super-yachts.

“It was a basic model with no protective casing. I was quite surprised it wasn’t damaged,” she said.

As it turned out, the volcano quietened down and the people returned to their villages before the machine could be put into service.

But on her return to Auckland, Ms Fray worked with local engineers General Marine to create a more robust device to send to the next emergency.

Mr Rose said there had been two or three emergencies in the past three years when the machine would have been used if it had been ready.