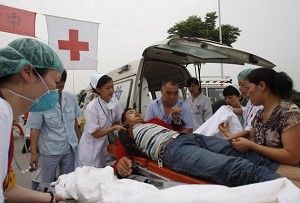 Reporting a fake number on the purchase receipt is a well known phenomenon of the systematic corruption that exists within the Chinese communist regime. But now, citizens are raising concerns that the same thing seems to be happening to money donations meant to be spent solely on helping people reconstruct their homes after the devastating disaster.

Local medicine retailers are speaking out, saying that a supervising body should be present to make sure all donated resources are being correctly utilized.

“There were two Red Cross officers from the Zhongjiang district trying to buy $10,000 worth of medicine from our shop for the earth quake victims, but they wanted us to write down a number that is five times higher than the true price. We refused, but the neighboring medical retailers gave way to these officers,” said one medicine retailer in an interview with NTDTV.

A local resident from Sichuan province said that more people have realized how much the CCP’s corruption has cost people’s lives.

“They’re even going for the rescue donations and resources. There is no trust left for the CCP at all,” said the resident.

Due to the concern over the ineffective supervision of Red Cross organizations in China, a number of people in China either escort the donated resources themselves to the quake area or hand it over to reliable community organizations. This has been the route chosen by two of the three largest web companies in China to donate their money. To avoid corruption, they’re taking an alternative way without having any contact with the CCP.

A China resident from Guang Xi province said that the corruption is an unavoidable result under a dictatorship. “The government is using its overwhelming control to have power over everything. There is no boundary for the government to act so there is no limitation on any form of corruption in China.”