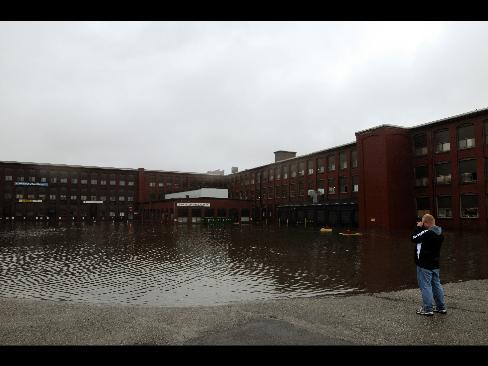 A man photographs a flooded commercial building along Elmwood Avenue as the Pawtuxett River overflows in Cranston, Rhode Island on March 30, 2010. Getty Images

April 1 (Bloomberg) — As many as 200,000 people may be affected by flooding in Rhode Island that has halted Amtrak service to Boston for two days, blocked highways and threatened a Rhode Island dam.

“When you start talking about the numbers of people who are affected, it’s pretty dad-gum close to a Category 3 to Category 4 hurricane,” said Hampton, who flew in from Alabama and often has to respond to the tropical systems. “It’s going to far, far exceed the local chapter’s capability in every way.”

About 184 people were housed in Red Cross shelters last night, and many more went to the shelters to eat, Hampton said. The Red Cross estimates 180,000 to 200,000 people will be dealing with the flood on some level, from cleaning the sewer- tainted water that washed over their homes to finding food.

Secretary of Homeland Security Janet Napolitano is scheduled to tour the state tomorrow. Hampton said it will take some time to put a monetary value on the damage.

Record rain fell on the U.S. Northeast earlier this week, following two other storms that had already left the ground saturated and rivers and streams on the verge of flooding, according to the National Weather Service. This week’s rain set records in Boston, New York and Providence.

The surging Pawtuxet River is menacing a dam in Coventry, Rhode Island, about 55 miles southwest of Boston, and has forced the evacuation of several neighborhoods in the town of 33,000, according to Coventry’s Web site.

In Cranston, the Pawtuxet set a record 20.79-foot (6.3- meter) crest yesterday, breaking the mark of 14.98 feet reached March 15, according to the National Weather Service.

Clearing skies forecast into the weekend won’t be enough to return flooding rivers to their banks immediately because there is a lag between the time the rain stops and the flow returns to normal, said Charlie Foley, a weather service meteorologist in Taunton, Massachusetts.

Interstate 95’s southbound lanes remain closed at Exit 14 in Rhode Island, and Amtrak’s tracks to Boston are flooded at Kingston, about 65 miles southwest of Boston.

Amtrak crews are inspecting the area today to determine when trains can start running again, according to a statement from the public rail carrier.

About 550 National Guard troops are still fighting the flood in Rhode Island, said Lieutenant Colonel Bruce Fletcher, a spokesman for the National Guard. Governor Donald Carcieri has asked businesses and schools to remain closed and people to stay off the roads.

Rainfall that began March 28 and ended over most of the Northeast yesterday set monthly precipitation records in New York, Boston and Providence.

Providence, Rhode Island’s capital, will probably have sunny skies and temperatures into the 70s this weekend, according to the weather service.

“Even when the flood waters recede and the sun comes out this weekend, people’s lives are going to be damaged for an awful long time,” said Rob Levine, the Red Cross’s regional chief executive officer for Vermont and New Hampshire, who is working with flood relief.

Elsewhere, hot, dry air spreading across the much of the U.S. is raising the risk for wildfires. Red flag warnings, meaning fires can start easily and spread quickly, range from Nebraska to Texas and through parts of Alabama, Georgia and Florida, according to the weather service.

To contact the reporter on this story: Brian K. Sullivan in Boston at bsullivan10@bloomberg.net.