A great-grandmother has been ordered to wear an electronic tag for breaching new animal welfare laws by selling a goldfish to a 14 year-old boy. 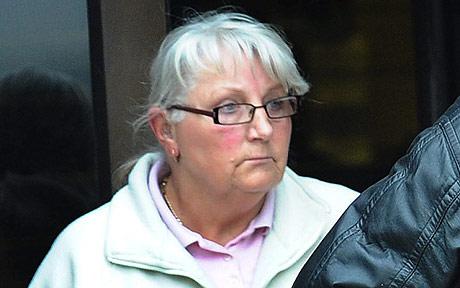 Joan Higgins, a pet shop owner, was caught selling the fish to the teenager in a ‘sting’ operation by council officials. She was then prosecuted in an eight month court process estimated to have cost the taxpayer more than £20,000.

Under new animal welfare laws, passed in 2006, it is it illegal to sell goldfish to under 16s. Offenders can be punished with up to 12 months in prison.

Mrs Higgins, 66, who thought the boy was much older than 14, escaped jail but was instead ordered to wear an electronic tag and given a night time curfew. She was also fined £1,000 by Trafford Magistrates Court.

Her son Mark Higgins, who was also proscecuted in connection with the case, described the treatment of his mother as a “farce” and “legal lunacy”. He said the punishment she had received would prevent her from attending her weekly bingo sessions as well babysitting her one month-old great grandchild.

Mr Higgins, 47, from Sale, Greater Manchester said: “I think it’s a farce and legal lunacy and I told the council that.

“What gets me so cross is that they put my Mum on a tag – she’s nearly 70, for goodness sake.”

He added: “She’s a great grandma – so she won’t be able to babysit a new born baby, all because of this tag. You would think they have better things to do with their time and money.”

He and his mother were caught out by a new bill passed in 2006 which makes it illegal to sell goldfish to under 16s.

In July 2009, Trafford council sent a 14 year old boy to the shop and after Mrs Higgins failed to ask the boy for identification she and her son were summoned to court.

Mr Higgins labelled the incident “entrapment”, saying the boy looked older than 14: “The council sent the 14 year old into us – in my book that’s entrapment.

“And besides which is it hard to tell how old a lad is these days. He looked much older than 14. I go to my local pub where they sometimes have a fayre and I see youngsters walking round with goldfish that they have won by hooking a duck.

“I said that to the council and they told me that wasn’t my problem.”

Mr Higgins was fined £750 and ordered to complete 120 hours of unpaid work. However, because his mother was not fit enough to do the same she was issued with a ten-week 6pm to 7am curfew instead.

The pair pleaded guilty at Trafford magistrates court to selling the fish to a person under 16 and for causing unnecessary suffering to a cockatiel by failing to provide appropriate care and treatment after council officers noticed a cockatiel bird in the shop in need of veterinary care with a broken leg. It was later put down.

Trafford Council said they had decided to investigate the shop, called Major Pets, in Sale, Greater Manchester following a complaint that it had sold a gerbil to a 14 year-old girl with learning difficulties, without the presence of a carer or parent.

Iain Veitch, Head of Public Protection at Trafford Council, said: “The evidence presented for this conviction clearly demonstrates that it is irresponsible to sell animals to those who are not old enough to look after them.

“We have many responsible pet shops in the borough who provide adequate advice and care for animals however let this conviction send out a message that we will not tolerate those who cause unnecessary suffering to animals.”

A spokesman for Trafford Council said their legal costs were met by the total fines paid by Joan and Mark Higgins of £1750.