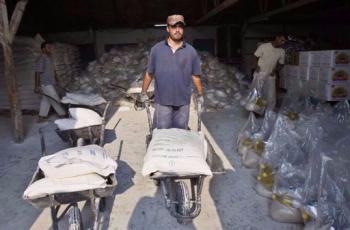 GAZA CITY (AFP) – The United Nations announced it was suspending food distribution to half of Gaza’s 1.5 million people on Thursday after Israel failed to allow emergency supplies into the Palestinian territory.

Israel had said it would allow 30 trucks to deliver supplies to Gaza on Thursday after it sealed off the Gaza Strip on November 5, but later said rocket and mortar fire by Gaza militants made it impossible to do so.

“They have told us the crossings are closed today. At the end of today we will suspend our food distribution,” said UN Relief and Works Agency spokesman Chris Gunness.

“Our warehouses are effectively empty,” he told AFP.

UNRWA usually distributes emergency food rations to about 750,000 people in the impoverished, overcrowded sliver of land whose economy has been crippled by a tight blockade Israel says is aimed at forcing militants to stop firing rockets and mortar rounds at the Jewish state.

The International Committee for the Red Cross (ICRC) said a truck it sent to the Kerem Shalom crossing was turned back.

Israel usually allows some humanitarian supplies into Gaza, but even this has stopped over the past week, leading to harsh criticism from aid agencies.

“Pushing people to the brink of desperation every few months and forcing UNRWA into yet another cycle of crisis management is not in the interest of anyone who believes in peace, moderation and stability,” said Gunness.

Israel also cut off European Union-funded fuel supplies to Gaza’s sole power plant on Thursday, prompting it to close down for want of diesel.

The plant, which provides between a quarter and a third of Gaza’s power with the rest coming from the Egyptian and Israeli national grids, shut down on Monday after Israel cut off fuel deliveries.

Israel allowed the supply of what it described as “minimal quantities” of fuel to the plant on Tuesday and Wednesday before cutting it off again on Thursday.

ICRC mission chief Katharina Ritz said that “every day the situation is getting more and more precarious for Gazans,” adding that there was a desperate need for medical supplies.

The Israeli military confirmed the closure of Gaza continued.

Reopening the crossings “has been delayed because of the mortar shelling that impedes the proper functioning of the crossing points,” he said.

The Israeli government generally responds to Gaza attacks by sealing off the territory, cutting off the already limited basic supplies it allows in under the blockade it imposed after Hamas seized control in June last year.

Israel had been expected to significantly ease its embargo after a six-month truce went into effect on June 19, but it argues that sporadic attacks by militants have made this impossible.

On Wednesday, four Gaza gunmen identified as Hamas members were killed in an exchange of fire Israel said started after militants tried to place a bomb near the border fence.

Both sides accuse each other of violating the truce, although Israel has indicated it would like to extend the ceasefire beyond its scheduled expiry on December 19.

“We hope the truce is not over, but we are going through a very delicate period in which we are prepared to confront any situation,” deputy defence minister Matan Vilnai told public radio.