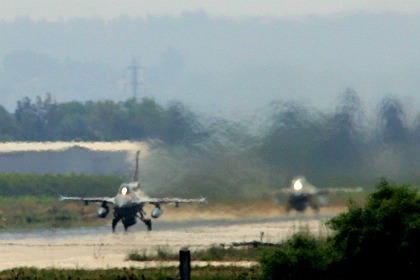 Iran’s government dismissed as propaganda the ABC report on the unidentified Pentagon official’s comments. Israeli government officials declined to comment on the report.

In the U.S., Pentagon spokesmen Bryan Whitman declined to address the report. “I don’t comment for Israel,” he said. State Department spokesman Tom Casey said he had “no information that would substantiate” the ABC report and criticized the official for not speaking publicly.

An Israeli strike might be triggered by the production of enough enriched uranium at Iran’s Natanz nuclear plant to make a bomb, ABC cited the official as saying. A second possible trigger would be the delivery of a Russian SA-20 air-defense system, the installation of which would make an Israeli attack more difficult, the U.S. official told ABC.

Oil rose on concern any conflict would cut supplies from OPEC’s second-largest producer. Crude oil for August delivery increased as much as $2.95, or 2.1 percent, to $142.95 a barrel in electronic trading on the New York Mercantile Exchange.

A strike on Natanz would only temporarily damage Iran’s nuclear program and could spark a wave of attacks on U.S. interests, ABC said in yesterday’s report, citing unidentified Pentagon officials. The U.S. and many of its allies have accused Iran of trying to develop nuclear weapons. Iran insists its production of enriched uranium is intended to produce electricity and is legal under the nuclear Non-Proliferation Treaty.

Ron Paul also says what Iran does is “perfectly legal”!

This is a very important Video!

“There is no doubt that such an operation is being considered, but it’s not going to happen tomorrow,” Kam said. “We still have some time. The Bush administration may be more sympathetic to an Israeli operation against Iran than whoever the next president may be, so it could happen before the end of the year.”

More than 100 Israeli F-16 and F-15 fighter planes took part in maneuvers over the eastern Mediterranean and Greece during the first week of June, the New York Times reported on June 20. Admiral Mike Mullen, chairman of the U.S. Joint Chiefs of Staff, was in Israel last weekend for meetings with Israeli military leaders, ABC said.

International Atomic Energy Agency inspectors made more than 14 visits to Natanz over the last year, the Vienna-based UN organization said last month. The IAEA said Iran hadn’t taken any steps toward making the highly enriched uranium necessary for a bomb and had stockpiled about 150 kilograms (330 pounds) of lower-grade enriched uranium suitable for power plants.

“Iran certainly wouldn’t be able to produce enough uranium at Natanz for a bomb,” British American Security Information Council Co-Director Paul Ingram said today in a telephone interview from London. “It would be impossible under the current safeguards arrangements to reconfigure the facility to produce highly enriched uranium.”

It takes around 25 kilograms of 90 percent enriched uranium- 235 isotopes to build a bomb. Iran currently has enough uranium to produce less than 4 kilograms of the material, Ingram said.

To contact the reporters on this story: Ladane Nasseri in Tehran at lnasseri@bloomberg.net; Thomas Penny in London tpenny@bloomberg.net.