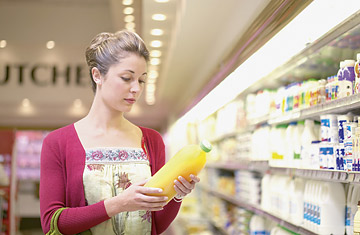 American supermarkets are epics of excess: it often seems like every item in the store comes in a “Jumbo” size or has “Bonus!” splashed across the label. But is it possible that the amount of food Americans are buying is, in fact… shrinking? Well, yes. Soaring commodity and fuel prices are driving up costs for manufacturers; faced with a choice between raising prices (which consumers would surely notice) or quietly putting fewer ounces in the bag, carton or cup (which they generally don’t) manufacturers are choosing the latter. This month, Kellogg’s started shipping Apple Jacks, Cocoa Krispies, Corn Pops, Froot Loops and Honey Smacks containing an average of 2.4 fewer ounces per box.

Similar reductions have recently happened or are on the horizon for many other products: Tropicana orange juice containers are shrinking from 96 ounces to 89; Wrigley’s is dropping its the 17-stick PlenTPak in favor of the 15-stick Slim Pack; Dial soap bars now weigh half an ounce less, and that’s even before they melt in the shower. Containers of Country Crock spread, Hellmann’s mayonnaise and Edy’s and Breyer’s ice cream have all slimmed down as well (although that may not necessarily be a bad thing).

“People are just more sensitive to changes in price than changes in quantity,” says Harvard Business School Professor John Gourville, who studies consumer decision-making. “Most people can tell you how much a box of cereal costs, but they have no clue how much is actually in it.” Other segments of the economy have made similar moves to pass on their higher costs to the consumer without raising prices directly. American Airlines announced in May that it would charge $15 each way for a single checked bag, part of what airlines have dubbed “a la carte” pricing, which – along with the industrywide drive to put price tags on former freebies like soft drinks, meals and headphones – some airline observers say is really an effort to avoid increasing base ticket prices.

Once they’re asked about the changes, food manufacturers are quick to explain their own increasing overhead costs – a Kellogg’s spokeswoman said reducing the amount of cereal per box was “to offset rising commodity costs for ingredients and energy used to manufacture and distribute these products” – but most are not exactly going out of their way to let consumers know they’re getting less for their money. Some claim newly shrunk products are responses to consumers’ needs. Tropicana told the New York Daily News earlier this month that its orange juice containers, which also include a newly designed cap and retail for the same price as the previous larger size, were the result of customer complaints. Said spokeswoman Jamie Stein, “We had a lot of spillage with our old products. It’s a value-added redesign.”

Reducing the size of products as a way of increasing prices is not new. Frito-Lay cut the amount of chips in their bags and Poland Springs reduced its water cooler jugs from 6 to 5 gallons years ago, all while keeping prices the same. Still, says Chris Waldrop, director of the Food Policy Institute at the Consumer Federal of America, “What’s going on now is definitely reflective of rising food costs and rising fuel costs.” Waldrop says he doesn’t blame manufacturers for taking the step to protect their bottom lines, but says the food companies should be honest with their customers about it. “If they’re transparent and open, consumers are less willing to think [manufacturers] are trying to pull one over on them,” says Waldrop. The changing product sizes are part of the reason the Bureau of Labor Statistics says groceries cost 5.8% more than the same time last year. Price checkers in the department measure more than 2,000 food items to determine overall food inflation, and when they notice product size changes, they adjust the inflation index accordingly, according to Ephraim Leibtag, an economist with the Economic Research Service of the Department of Agriculture.

When a product amount drops below a benchmark like “1 pound” or “1 gallon” consumers often take note, according to Gourville. But after that, it’s much easier for manufacturers to further whittle down amounts. It’s all about taking away consumers’ ability to compare apples to apples. The best way to compare food products if you’re not sure if sizes have changed is to look at the “unit price,” which breaks down the cost per ounce or per quart.

– With Reporting by Alex Altman