The latest idea was put forward yesterday by Home Office minister Vernon Coaker, who said that officials were examining whether to make possession of alcohol by someone under the age of 18 an offence.

Speaking at the launch of the Home Office’s Action Plan for Tackling Violent Crime, he said: “It’s something we are not saying we are going to do but it is something that has been raised with us.”

Currently, police officers can only remove alcohol from youngsters if they believe that they are about to consume it – and can only issue a fine as punishment.

But campaigners have warned introducing tougher sanctions, such as a criminal record, will criminalise teenagers for a very minor offence.

Other plans discussed at the launch focused on a crackdown on knife crime. 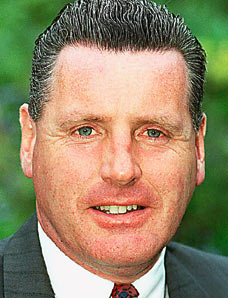 Proposals included the introduction of portable metal-detector arches – which can be set up temporarily at the entrance of any pub or club to check for knives.

But the plans descended into farce as ministers admitted only two devices would be available for each police force.

Plans to invest in hand-held metal detecting “wands” were also ridiculed when it emerged that only 400 would be made available across England and Wales – enough for one to be shared between every 350 police officers.

Critics claim the modest scale meant the equipment would be a “drop in the ocean” in the struggle against Britain’s knife culture.

Police chiefs meanwhile suggested that pubs and clubs which are plagued by violence should buy their own metal detectors to keep knives and guns out of their premises.

Latest figures show that the number of people admitted to hospital after being stabbed has risen sharply from around 3,500 a year when Labour came to power to 5,500 last year – in line with separate recent figures showing that fatal stabbings leapt by a fifth last year to 258.

By MATTHEW HICKLEY and GWYNETH REES
Last updated at 12:38pm on 19th February 2008