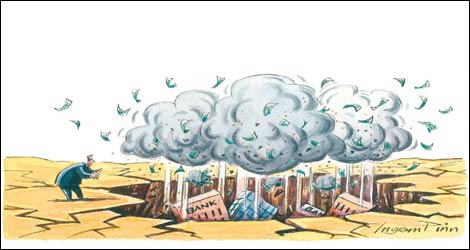 Step one is the worst housing recession in US history. House prices will, he says, fall by 20 to 30 per cent from their peak, which would wipe out between $4,000bn and $6,000bn in household wealth. Ten million households will end up with negative equity and so with a huge incentive to put the house keys in the post and depart for greener fields. Many more home-builders will be bankrupted.

Step two would be further losses, beyond the $250bn-$300bn now estimated, for subprime mortgages. About 60 per cent of all mortgage origination between 2005 and 2007 had “reckless or toxic features”, argues Prof Roubini. Goldman Sachs estimates mortgage losses at $400bn. But if home prices fell by more than 20 per cent, losses would be bigger. That would further impair the banks’ ability to offer credit.

Step three would be big losses on unsecured consumer debt: credit cards, auto loans, student loans and so forth. The “credit crunch” would then spread from mortgages to a wide range of consumer credit.

Step four would be the downgrading of the monoline insurers, which do not deserve the AAA rating on which their business depends. A further $150bn writedown of asset-backed securities would then ensue.

Step five would be the meltdown of the commercial property market, while step six would be bankruptcy of a large regional or national bank.

Step seven would be big losses on reckless leveraged buy-outs. Hundreds of billions of dollars of such loans are now stuck on the balance sheets of financial institutions.

Step eight would be a wave of corporate defaults. On average, US companies are in decent shape, but a “fat tail” of companies has low profitability and heavy debt. Such defaults would spread losses in “credit default swaps”, which insure such debt. The losses could be $250bn. Some insurers might go bankrupt.

Step nine would be a meltdown in the “shadow financial system”. Dealing with the distress of hedge funds, special investment vehicles and so forth will be made more difficult by the fact that they have no direct access to lending from central banks.

Step 10 would be a further collapse in stock prices. Failures of hedge funds, margin calls and shorting could lead to cascading falls in prices.

Step 11 would be a drying-up of liquidity in a range of financial markets, including interbank and money markets. Behind this would be a jump in concerns about solvency.

Step 12 would be “a vicious circle of losses, capital reduction, credit contraction, forced liquidation and fire sales of assets at below fundamental prices”.

These, then, are 12 steps to meltdown. In all, argues Prof Roubini: “Total losses in the financial system will add up to more than $1,000bn and the economic recession will become deeper more protracted and severe.” This, he suggests, is the “nightmare scenario” keeping Ben Bernanke and colleagues at the US Federal Reserve awake. It explains why, having failed to appreciate the dangers for so long, the Fed has lowered rates by 200 basis points this year. This is insurance against a financial meltdown.

Is this kind of scenario at least plausible? It is. Furthermore, we can be confident that it would, if it came to pass, end all stories about “decoupling”. If it lasts six quarters, as Prof Roubini warns, offsetting policy action in the rest of the world would be too little, too late.

Can the Fed head this danger off? In a subsequent piece, Prof Roubini gives eight reasons why it cannot***. (He really loves lists!) These are, in brief: US monetary easing is constrained by risks to the dollar and inflation; aggressive easing deals only with illiquidity, not insolvency; the monoline insurers will lose their credit ratings, with dire consequences; overall losses will be too large for sovereign wealth funds to deal with; public intervention is too small to stabilise housing losses; the Fed cannot address the problems of the shadow financial system; regulators cannot find a good middle way between transparency over losses and regulatory forbearance, both of which are needed; and, finally, the transactions-oriented financial system is itself in deep crisis.

The risks are indeed high and the ability of the authorities to deal with them more limited than most people hope. This is not to suggest that there are no ways out. Unfortunately, they are poisonous ones. In the last resort, governments resolve financial crises. This is an iron law. Rescues can occur via overt government assumption of bad debt, inflation, or both. Japan chose the first, much to the distaste of its ministry of finance. But Japan is a creditor country whose savers have complete confidence in the solvency of their government. The US, however, is a debtor. It must keep the trust of foreigners. Should it fail to do so, the inflationary solution becomes probable. This is quite enough to explain why gold costs $920 an ounce.

The connection between the bursting of the housing bubble and the fragility of the financial system has created huge dangers, for the US and the rest of the world. The US public sector is now coming to the rescue, led by the Fed. In the end, they will succeed. But the journey is likely to be wretchedly uncomfortable.