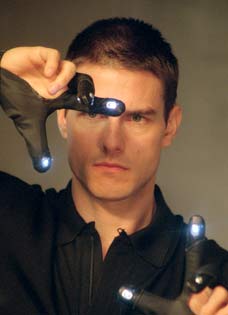 In the Steven Spielberg film Minority Report crimes were prevented before they had even ocurredMinisters want GPs, social workers, mental health agencies, housing officials and school or college staff to provide tip-offs so that multi-agency Crime and Disorder Reduction Partnerships, including local police, can act.

The only existing systems are for monitoring convicted criminals through probation staff, so new organisations will have to be set up to watch those thought to be at risk of committing violence.

Once an individual is assessed as a high-risk potential offender, they would be placed on local and national databases and subjected to regular reviews. The Home Office claims such measures will save lives.

Ministers have cited examples such as Michael Stone, convicted of murdering Lin and Megan Russell, or Soham murderer Ian Huntley.

They repeatedly came to the notice of medics or police, but lack of data- sharing meant threatening patterns were missed.

The Home Office said examples of “interventions” for potential criminals included regular visits from social services staff, providing mentors to young people, forcing them to attend weapons awareness classes or more after-school activities to keep them off the streets.

Union officials voiced grave concerns and accused ministers of failing to consult professionals or to address concerns they had already raised.

A spokesman for Unison, the public services union, said: “These plans threaten to build a barrier of suspicion between the public and those who deliver their services.”

Shadow Home Secretary David Davis said: “This is another ill-thought through measure, no doubt based on flawed databases and unreliable statistical analysis.”

Shami Chakrabarti, director of human rights group Liberty, said: “Home Office edicts are unlikely to help skilled health professionals make delicate judgments on behalf of their patients. The danger is of vulnerable victims treating their own injuries for fear of being reported to the police.”