– Qatar, Saudi Arabia to Islamize One of Europe’s Greatest Cathedrals:

Muslim supremacists seem to have fantasies — as well as a long history — of converting Christian sites to Islamic ones. Take, for example, Saint-Denis, the Gothic cathedral named for the first Christian bishop of Paris who was buried there in 250, and the burial place of Charles Martel, whose victory stopped the Muslim invasion of France in 732. Now, according to the scholar Gilles Kepel, this burial place of most of France’s kings and queens is “the Mecca in Islam of France”. The French Islamists are dreaming of taking it over and replacing the church bells with the call of the muezzin.

The religion of peace … 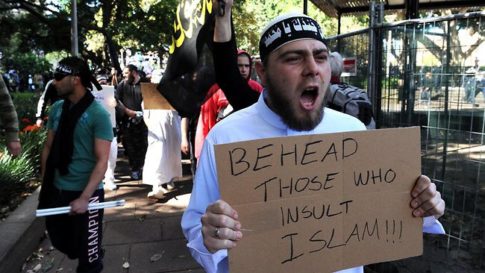 – D-Day for George Pell: Police must decide whether to charge cardinal over historic child sex charges:

Advice on historical sex abuse allegations against Cardinal George Pell has been sent to Victoria Police by the state’s Department of Public Prosecutions.

It must now be decided whether Australia’s most senior Catholic official will be charged over allegations of sexual abuse.

A hardline Saudi cleric has called on football’s governing body, FIFA, to prohibit players from making the sign of the cross in celebration on the field. As expected, not only have his calls fallen on deaf ears, but he has also been lambasted online.

Mohammed Alarefe boasts 17.5 million Twitter followers, which, though impressive, is unlikely to hold any sway with FIFA’s elite.

“I’ve seen video clips of athletes, soccer players running, shooting and when they win they make the symbol of the cross on their chests and my question is do FIFA’s rules not forbid this,” he tweeted.

– The Catholic Church is punishing U.S. priests for speaking the truth about Islam and jihad:

Many bishops protected priests who were child molesters for years, transferring them from parish to parish and allowing them to prey upon new children rather than turning them over to police. In the Catholic Church today, protecting the image of Islam appears to be job one: you can be a cleric who speaks out against the Church’s official positions (such as those on contraception and female priests) and in many quarters of the Church you’ll be hailed as a hero. But the highly dubious proposition that Islam is a religion of peace has become a kind of superdogma that the U.S. bishops enforce with a stringency (and even ruthlessness) that they never display regarding actual Church teaching. You can reject every element of the Nicene Creed and everything the Church teaches, and still the U.S. Catholic Bishops will consider you a Catholic in good standing. But if you believe that Islam is not a religion of peace, you have no place in the U.S. Catholic Church.

Read moreThe Catholic Church is punishing U.S. priests for speaking the truth about Islam and Jihad

– SCOTLAND: Priest fired for objecting to an anti-Christian quran reading given by a Muslim in a church:

The specific quran passage he objected to was the one that says ‘Jesus is NOT the son of God.’ Bishops of the Anglican Church, after consulting with Buckingham Palace, decided that a Christian priest defending the Christian faith in a Christian church in a Christian country was way too controversial…so, he had to go.

At least 42 Christians accused of murder in Pakistan were reportedly told they’d be acquitted if they embraced Islam. The accused face the charges after the lynching of two men following twin suicide blasts at churches during Sunday mass.

Prosecutor Syed Anees Shah initially denied telling the accused he could guarantee their acquittal if they converted. However, he later admitted he did, when told by Pakistan’s Express Tribune that the accused had a video recording of what he said.

Justin’s note: Today, we have another brand-new Conversations with Casey to share with you. In the interview below, Doug Casey and I discuss holy wars in Europe.

Some folks will think I’m crazy for even entertaining this idea. But a few weeks ago, Turkey’s foreign minister said that “wars of religion” are coming to Europe.

That’s a major warning. You have to take it seriously.

So, I recently sat down with Doug to discuss this matter. I hope you enjoy this conversation as much as I did.

Justin:  Doug, Turkey’s foreign minister recently said that “wars of religion” are coming to Europe. Do you think this could actually happen?

Doug: Well, human nature hasn’t changed in many thousands of years. And religion is important to the human animal. Perhaps it’s always been something that people were prone to fight about, but the historical record shows that religious wars only started with the invention of Judaism, Christianity and Islam. Of course, these religions—which have always been at war with each other, and all other religions—are similar in that they believe in one god. Pagan religions were and are accepting of other people’s gods and beliefs.

Christianity is dying out in Europe.

That’s according to a new Pew Research study showing that deaths among Christians outnumbered births in Europe by almost six million between 2010 and 2015. “In Germany alone, there were an estimated 1.4 million more Christian deaths than births from 2010 to 2015,” the Pew report states.

While Christianity dies out in Europe, Islam is rapidly expanding. During that same time period, births among Muslims in Europe outnumbered deaths by more than two million. 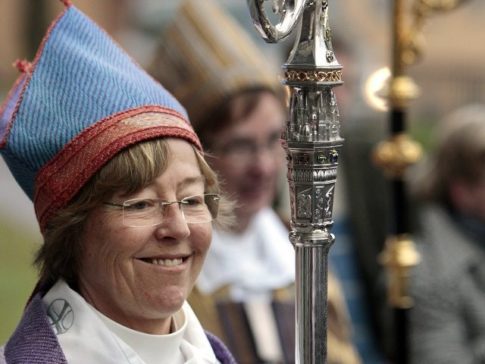 The Bishop of Stockholm has proposed a church in her diocese remove all signs of the cross and put down markings showing the direction to Mecca for the benefit of Muslim worshippers.

Eva Brunne, who was made the world’s first openly lesbian bishop by the church of Sweden in 2009, and has a young son with her wife and fellow lesbian priest Gunilla Linden, made the suggestion to make those of other faiths more welcome.

– In 2017, Muslims still believe that Allah turned Jews into pigs and apes as punishment for rejecting Islam:

And how do they know this? Allah told them. That’s probably why in 2017, they still behave like barbarians and savages from the dark ages and should be banned from and driven out of the West.

Anne Aly has for years been an Islamic supremacist foe of free discourse. In August 2014 I wrote here about her false claims that Islam doesn’t sanction beheading and grants equality of rights to women. Instead of responding on substance, which I understand that she could not really do since I had produced numerous Qur’an verses that rather directly showed her to be lying. So instead she claimed that she had received “hate mail” from Jihad Watch readers; six months later that claim had morphed into death threats. Predictably, that became the story, as dubious as her claims were, not her deceptions.

Now, if she gets her way in Australia, she could just have me arrested — not for the alleged hate mail or death threats, but for my initial post exposing her deceptions. This proposed law clearly would establish Muslims as a protected class, beyond all criticism, which would have the effect of allowing the jihad to advance unimpeded and unopposed.

“Australian MP Wants to Make It Illegal to Cause Religious Offence to Muslims,” by Kieran Corcoran, Heat Street, March 30, 2017 (thanks to Lookmann):

– HB45: Bill to allow private churchs to have their own police forces, make it a hate crime to criticize first responders:

The great American Police State has outdone itself! America already has public transit police, hospital police, campus and high school police and now you can add ‘church’ police to the list.

Very occasionally — even in contemporary Britain — some good news arrives. No single piece of news has been more invigorating than the discovery that a member of the clergy of the Church of England has found a vertebra.

In recent years, the British public have become used to a steady succession of bad-news stories from the purveyors of the Good News. This has taken every imaginable form, from the former Bishop of Oxford suggesting in the House of Lords that the Quran could be recited at the next coronation service, to the former Archbishop of Canterbury — Rowan Williams — notoriously suggesting that a place should be found for Islamic sharia in the law of the land.