TOKYO — In an unusually stark warning, Japan’s prime minister during last year’s nuclear crisis told a parliamentary inquiry on Monday that the country should discard nuclear power as too dangerous, saying the Fukushima accident had pushed Japan to the brink of “national collapse.”

Read moreJapan’s Former PM Naoto Kan on Fukushima: ‘Experiencing The Accident Convinced Me That The Best Way To Make Nuclear Plants Safe Is Not To Rely On Them, But Rather To Get Rid Of Them’

TEPCO and the Japanese government are STILL lying and deceiving the public.

Considering the evacuation of Tokyo???

The Japanese government doesn’t even give a damn about the people in Fukushima City who should have all been evacuated a long time ago.

The government is not willing (and not able) to evacuate just 290, 000 people.

MARK COLVIN: But first an exclusive insight into one of this year’s biggest stories – the Fukushima meltdowns.

Kenichi Matsumoto is the ultimate insider.

As special advisor to Japan’s prime minister and cabinet he witnessed both the government’s and the plant operator’s responses to the worst nuclear accident in a quarter of a century.

Former Japanese Prime Minister Kan Naoto says he felt a sense of crisis that the nuclear plant mishap in Fukushima could obliterate Tokyo and its vicinity, said the Japanese daily Tokyo Shimbun Tuesday.

Kan, who stepped down as prime minister Friday, said, “The week shortly after the accident is the period when I felt the highest sense of crisis,” adding, “The thought of an uninhabited Tokyo made me shudder.”

“At around 3 a.m. March 15, three days after the accident, I got a report from then Economy, Trade and Industry Minister Banri Kaieda that Tokyo Power Corp. was about to withdraw from the nuclear facility. So instantly I summoned the company`s president Masataka Shimizu and asked him to set up a joint countermeasures headquarters of the government and the company at the company’s headquarters,” Kan said.

“Had Tokyo Power Corp. withdrawn from the nuclear power plant, nobody might live in Tokyo now.”

Kan said, “If the power company had pulled out of the facility and left nuclear fuel unattended, the cooling water would have dried out within dozens of hours and the meltdown of reactors would have occurred,” adding, “If this had been the case, radioactive materials several or even dozens of times as much as those leaked in Chernobyl would had leaked. The country was brought to the brink of collapse.”

Japan’s Prime Minister Naoto Kan survived a no-confidence vote after appealing to ruling party dissidents by offering to resign once the country’s worst crisis since World War II is under control.

The Diet’s lower house voted 293-152 against the motion, as opposition lawmakers failed to attract enough support from Kan’s Democratic Party of Japan. Former DPJ premier Yukio Hatoyama called for party unity in rejecting the bill after Kan said he would step down once the disaster is contained.

May 01 (NHK) — Prime Minister Naoto Kan says the government and Tokyo Electric Power Company failed to fully address safety issues that had come to light before the March 11 disaster.

An accident last June at Fukushima Daiichi nuclear power plant caused by the loss of outside power and the subsequent drop in the water levels of a reactor was taken up at Sunday’s Upper House Budget Committee meeting.

Both the TOPIX and the Nikkei are now down more than 20% for the year on the risk that nuclear radiation will pose a threat to Tokyo.

The yen tripped on talk of intervention and bond yields rose
as investors sold debt to offset losses in the stock market. The
scale and speed of the equity selloff, on record volume for a
second day running, forced fund managers to sit on the
sidelines. 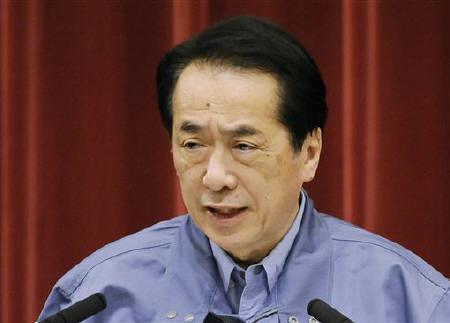 – Japan PM to nuclear power firm: “What the hell’s going on?” -Kyodo (Reuters):

(Reuters) – Japan’s prime minister was furious with the power firm at the centre of the nuclear crisis for taking so long to inform his office about a blast at a stricken reactor plant, demanding “What the hell is going on?”.

Kyodo news agency reported that Naoto Kan also ordered Tokyo Electric Power Co on Tuesday not to pull employees out of the Fukushima plant north of Tokyo, which was badly damaged by last week’s earthquake and has been leaking radiation.

“The TV reported an explosion. But nothing was said to the the premier’s office for about an hour,” a Kyodo reporter quoted Kan telling power company executives.