– Maxine Waters Threatens To “Go And Take Out ‘Moron’ Trump”, The Most “Dangerous President Ever”

– Maxine Waters: Putting My “Career On The Line” To Resist “Disgusting, Poor Excuse Of A Man”:

Maxine Waters has emerged as the House leader of the “Resist Trump” movement after previously warning him to “get ready for impeachment” and referring to his administration as “a bunch of scumbags.”

Now, at a gala hosted by EMILY’s list, a PAC that aims to elect female Democrats who support abortion rights, Waters decided to ramp things up a bit by referring to Trump as a “disgusting, poor excuse of a man” and saying that she’s putting her “career on the line” to resist his presidency.

Read moreAND NOW: Maxine Waters: Putting My “Career On The Line” To Resist “Disgusting, Poor Excuse Of A Man” (Video)

“How can a president, who is acting in the manner that he’s acting, …the way that he’s talking to Muslims, or whether he’s talking about his relationship to Putin, and the Kremlin — and knowing that they have hacked our D-triple-C — DNC, and the fact that he is wrapping his arms around Putin while Putin is continuing to advance into Korea…”… 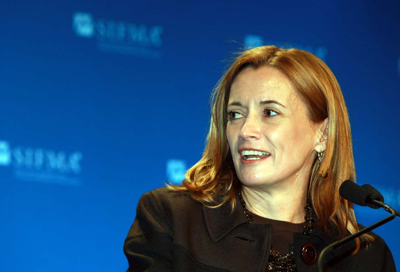 As I have previously shown, speculative derivatives (especially credit default swaps or “CDS”) are a primary cause of the economic crisis. They were largely responsible for bringing down Bear Stearns, AIG (and see this), WaMu and other mammoth corporations.

According to top experts, risky derivatives were not only largely responsible for bringing down the American (and world) economy, but they still pose a substantial systemic risk:

Now, Bloomberg notes that the carbon trading scheme will be largely centered around derivatives:

The banks are preparing to do with carbon what they’ve done before: design and market derivatives contracts that will help client companies hedge their price risk over the long term. They’re also ready to sell carbon-related financial products to outside investors.

[Blythe] Masters says banks must be allowed to lead the way if a mandatory carbon-trading system is going to help save the planet at the lowest possible cost. And derivatives related to carbon must be part of the mix, she says. Derivatives are securities whose value is derived from the value of an underlying commodity — in this case, CO2 and other greenhouse gases…

Who is Blythe Masters?

She is the JPMorgan employee who invented credit default swaps, and is now heading JPM’s carbon trading efforts. As Bloomberg notes (this and all remaining quotes are from the above-linked Bloomberg article):

Masters, 40, oversees the New York bank’s environmental businesses as the firm’s global head of commodities…
As a young London banker in the early 1990s, Masters was part of JPMorgan’s team developing ideas for transferring risk to third parties. She went on to manage credit risk for JPMorgan’s investment bank.

Among the credit derivatives that grew from the bank’s early efforts was the credit-default swap.

Some in congress are fighting against carbon derivatives:

“People are going to be cutting up carbon futures, and we’ll be in trouble,” says Maria Cantwell, a Democratic senator from Washington state. “You can’t stay ahead of the next tool they’re going to create.”

Cantwell, 51, proposed in November that U.S. state governments be given the right to ban unregulated financial products. “The derivatives market has done so much damage to our economy and is nothing more than a very-high-stakes casino — except that casinos have to abide by regulations,” she wrote in a press release…

However, Congress may cave in to industry pressure to let carbon derivatives trade over-the-counter:

The House cap-and-trade bill bans OTC derivatives, requiring that all carbon trading be done on exchanges…The bankers say such a ban would be a mistake…The banks and companies may get their way on carbon derivatives in separate legislation now being worked out in Congress…

Read moreJPMorgan Employee Who Invented Credit Default Swaps is One of the Key Architects of Carbon Derivatives, Which Would Be at the Very CENTER of Cap and Trade