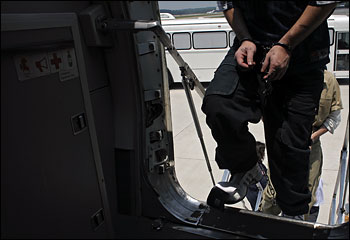 The U.S. government has injected hundreds of foreigners it has deported with dangerous psychotropic drugs against their will to keep them sedated during the trip back to their home country, according to medical records, internal documents and interviews with people who have been drugged.

The government’s forced use of antipsychotic drugs, in people who have no history of mental illness, includes dozens of cases in which the “pre-flight cocktail,” as a document calls it, had such a potent effect that federal guards needed a wheelchair to move the slumped deportee onto an airplane.

“Unsteady gait. Fell onto tarmac,” says a medical note on the deportation of a 38-year-old woman to Costa Rica in late spring 2005. Another detainee was “dragged down the aisle in handcuffs, semi-comatose,” according to an airline crew member’s written account. Repeatedly, documents describe immigration guards “taking down” a reluctant deportee to be tranquilized before heading to an airport.

In a Chicago holding cell early one evening in February 2006, five guards piled on top of a 49-year-old man who was angry he was going back to Ecuador, according to a nurse’s account in his deportation file. As they pinned him down so the nurse could punch a needle through his coveralls into his right buttock, one officer stood over him menacingly and taunted, “Nighty-night.”

Such episodes are among more than 250 cases The Washington Post has identified in which the government has, without medical reason, given drugs meant to treat serious psychiatric disorders to people it has shipped out of the United States since 2003 — the year the Bush administration handed the job of deportation to the Department of Homeland Security’s new Immigration and Customs Enforcement agency, known as ICE.

Involuntary chemical restraint of detainees, unless there is a medical justification, is a violation of some international human rights codes. The practice is banned by several countries where, confidential documents make clear, U.S. escorts have been unable to inject deportees with extra doses of drugs during layovers en route to faraway places.

Read moreDetainees drugged against their will