– The Mystery Of Dubai’s Vaporized Gold: The Plot Thickens:

Earlier this week, we told a fascinating story about an unprecedented, multi-year smuggling ring involving Turkey, Iran, and Dubai (as well as China, Russia and countless other nations) which saw corruption reaching to the very top of the political and financial establishment: from president Erdogan in Turkey, to one of Turkey’s richest people, Iran-born Riza Sarraf, to Sheikh Sultan Bin Khalifa Al Nahyan, the son of the ruler of Abu Dhabi and one of the world’s richest people. The smuggled object in question was gold, billions of dollars worth of gold.

The focus of the story was the previously unknown Dubai gold trading house, Gold.AE, until recently managed by one Mohammed Abu-Alhaj, which as we showed was the primary conduit by which Turkish physical gold found its way “legally” in Dubai, from where it subsequently left for Iran but not before pocketing millions in “commissions.”

As we reported, Gold.AE – a subsidiary of Gold Holding, the largest gold-focused investment holding company headquartered in Dubai – and the company perhaps best known for launching gold ATMs in the Emirates back in 2010… 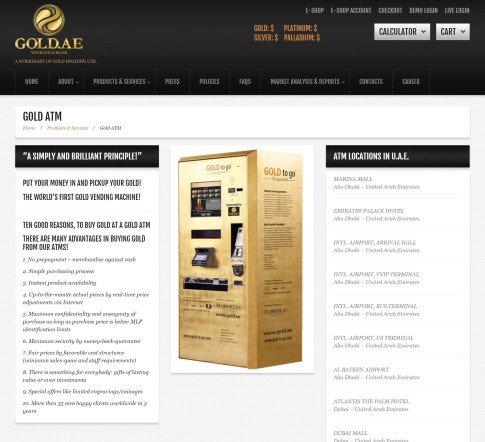 … announced a few days ago that it had suddenly and unexpectedly gone out of business, after an inquiry by minority shareholders announced that the entire old “management team abruptly resigned with no notice” and that “there had been substantial withdrawals from the company’s account to the personal accounts of some of the management and the majority shareholders.”

In other words, the company which was used as a cover for billions in gold transactions over the last several years in the Turkey-Iran gold smuggling trade, was suddenly not only insolvent but had been thoroughly plundered of all its holdings, including a thorough plundering of client accounts.

Think the Corzining of MF Global, only on steroids, goes to Dubai.

To be sure the police was quickly involved:

In order to try and secure/recover monies that had been taken out of the accounts of the company, Mr. Gauthier in his capacity as manager has filed various cases as against the recipients of the funds from the Company (Dubai Police ( Bur Dubai Police Station), Case No: 24378). The minority shareholders are doing everything within their powers to support him in his efforts to recover these monies that were withdrawn from Gold AE in questionable circumstances.

DMCC has alleged that some of these activities undertaken by the previous management are in breach of DMCC’s rules and as such they have taken the decision to terminate the license of the Company. We are working closely with DMCC to find a solution and in the meanwhile, we request that you bear with us. In the meanwhile, as a statutory consequence of the license being terminated, the trading platform of the Company has to shut down as of the date of termination of the license which is 24th November 2015.

However, since as Gold.AE admitted a Swiss bank account had been uncovered, it is very unlikely that any of the funds involved will be recovered.

And now that the gold-trading company at the nexus of what may have been the world’s biggest gold smuggling ring in history has imploded seemingly overnight, vaporizing countless tons of physical gold and unknown amounts of client cash, even more questions remain.

One attempt to answer some of these comes from the website of Arabian Business, which has picked up on this trail and reports that it is understood that the previous management team were replaced in March, resulting in the appointment of Andres Gauthier as CEO and Mo Nico Consari as managing director.

It is unclear why or what prompted the removal of the previous management team, or why it took nearly 9 months for an update to clients to be issued, in which it was made abundantly clear that there was no money left in the gold trading organization.

Gold AE suspended its services without warning in October, according to a handful of its customers who claim not to have been able to access their accounts for several weeks.

The December 16 Gold AE email to customers states that, during an internal investigation, Gold AE’s acting management found that members of the previous management team “had used significant amounts of client and shareholders’ money and transferred [it] to multiple locations, including Switzerland, Jordan, Turkey and Saudi Arabia.”

It is understood that Gold AE’s customers have been urged to initiate arbitration in Dubai’s courts on an individual basis in order to recoup their lost investments.

However, customers claim they have been left in the dark about what has been going on at the company and have been unable to trade their product or access their accounts.

How much money have clients lost?  “One customer, who asked not to be named, told Arabian Business they were in touch with around 60 of Gold AE’s estimated 2,000 clients and that that minority alone claims to have around AED12 million ($3.2 million) locked up in the company.”

This is just a small portion of what was supposed to be client “segregated” accounts, which lately we have seen are nothing but a piggy bank for corrupt management to borrow from, or steal outright, at whim.

According to Arabian Business, it is thought the total amount of missing funds reaches $25-30 million. The reality, however, is that nobody knows and a far more important question is how many hundreds of millions or billions were funneled through Gold.AE in the period starting in 2012 when the company’s now disgraced former manager, Abu-Alhaj, became the Dubai frontman for all Turkish gold laundering. 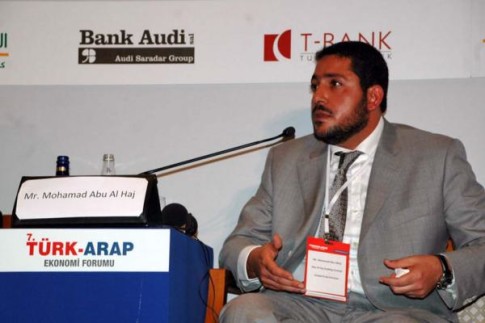 As for Gold.AE’s clients, they are understandably furious:

The source claimed Gold Holding “has failed to take responsibility and that DMCC and DIFC are playing ping-pong with us customers while we go to appeal to try to solve this matter.” The source added: “No one is taking responsibility to resolve this and we as customers are feeling very helpless.

“Even the police are not taking this up and are directing us towards the court. So we are in the process of appointing lawyers to represent us in court.” Dubai Police and Dubai Courts did not immediately respond to requests for comment.

Considering a major shareholder of Gold.AE’s holding company is none other than Abu Dhabi’s second most important person, this is not a surprise.

Additionally, the regulators are also now involved. Too bad that, just like in the US, they arrived on the scene just a little bit too late:

A spokesman for the DMCC said in an emailed statement to Arabian Business: “DMCC is aware of allegations relating to Gold AE, a wholly-owned subsidiary of Gold Holding Limited – a DIFC-licensed entity.

“We have conducted an internal investigation into the allegations of fraudulent activity by Gold AE. As a result of this investigation, DMCC has terminated the trade licence for Gold AE and have notified Gold Holding Limited accordingly.

“By terminating the trade licence of Gold AE, the company is mandated by law to cease all of its trade operations and not undertake any further commercial activities. We are closely monitoring the matter and have verified information that relevant authorities are taking necessary next steps.

“In its capacity as licensing authority, DMCC is unable to provide specific financial or legal advice to any customer of Gold AE. We encourage strongly that all customers of Gold AE contact Gold Holding Limited for further information.

“In order to assist customers of Gold AE who are experiencing difficulty in receiving information from Gold AE, DMCC is preparing further guidance for all clients of Gold AE, which will be issued shortly.

“In the meantime, please send any enquiries to goldcomplaints@dmcc.ae. We will forward them on to Gold Holding Limited who, we understand, is collating customer information at this time.”

And now the rush to make sure any link between the criminal Gold.AE and its parent, SBK Holdings-owned Gold Holdings is immediately severed. A spokesperson for the DIFC said: “We wish to make it clear that although Gold AE is a subsidiary of M/s Gold Holding, which is a DIFC-based holding company, Gold AE and M/s Gold Holding Ltd are two separate entities.”

“We wish also to clarify that M/s Gold Holding Ltd is, to our knowledge, not involved in any trading operations, client-facing business affecting clients of Gold AE or the provision of any financial services. Accordingly, it is not regulated by the Dubai Financial Services Authority.”

Why the scramble to exonerate Gold Holding Ltd? Because as we reported yesterday, it is owned by this man: Sheikh Sultan Bin Khalifa Bin Zayed Al Nahyan.

Sultan is the advisor to the President of UAE, the eldest son of Khalifa Bin, President of the United Arab Emirates, Supreme Commander of the UAE Armed Forces, and Ruler of Abu Dhabi. 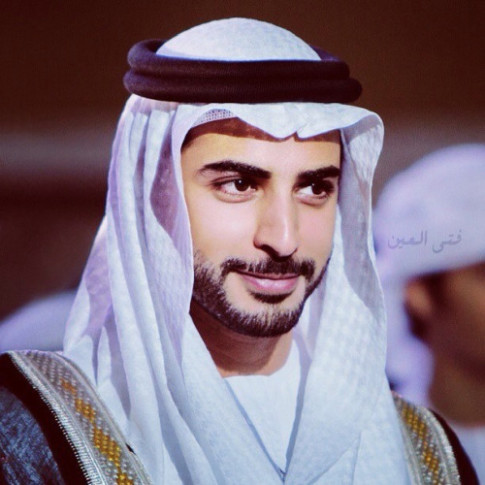 Sultan may just be most important young person in Dubai, which makes him among the top 20 most important, not to mention wealthiest, in the world.

It would not be good for his reputation if it emerged that not only is his holding company involved in the biggest gold smuggling scandal in history, but that said company just vaporized after an unprecedented case of management embezzlement.

Al Haj insisted in his email that Gold AE’s existing management team were responsible for the alleged fraudulent activity. He also claimed that requests by him for meetings with shareholders to discuss management issues had been refused.

So, is the former CEO of Gold.AE the criminal mastermind, the person who was responsible for the Turkish gold presence in Dubai, and the one who defrauded Gold.AE… or is he merely the fallguy: after all the new management team, according to Arabian Business, had been at the company since March: how could it take it 9 months to uncover that the company was nothing but a hollow shell, whose assets had been pilfered by the previous management.

And if indeed this crazy story which has every possible James Bond element in it culminates with a case of scapegoating, does that immediately mean that Sheikh Sultan Bin Khalifa, a person at the top of the Gulf’s political and financial oligarchy, is involved. Because if he is, so is the US, as nothing happens in Abu Dhabi without the United States being aware of it. Finally, if that is the case, it means that not only did the US sanction what has been the world’s biggest gold smuggling ring, but that is implicitly gave Iran its blessing to use berterable Turkish gold in order to bypass sanctions imposed by… the United States!

In the next installment of this action and mystery-packed series, we hope to uncover just what the role of the “developed” countries was in this massive smuggling operation, and perhaps even more importantly, where did Turkey end up buying hundreds of tons of gold which it subsequently sold to Iran and where did the Iranian gold ultimately end up?