– Was Germanwings jetliner taken down as a message to Germany not to align with Russia? (Story Leak, March 27, 2015):

The most overlooked piece of evidence in the downing of the Germanwings Airbus A320 is as follows:

Witnesses have described hearing an explosion ‘like the sound of dynamite’, and then seeing fighter jets fly past, suggesting the passenger plane had been under military escort.’[1] 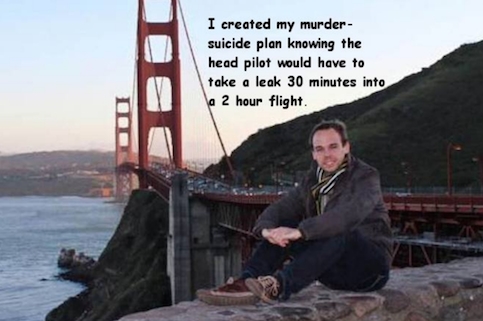 In the history of the commercial airline industry never has a jetliner been brought down under the bizarre and much publicized circumstances of a depressed pilot deliberately executing a “crash and burn” scenario.   Given the number of mysterious airliner crashes and explosions over the past few years, there appears to be only one explanation for this purposeful takedown.

Germany is the pivotal nation of the European Union (EU).  The NSA knows — without a doubt — that Prime Minister Merkel is wavering in her commitment to both the Anglo-American dominated NATO, as well as to the U.S.-directed sanction regime against Russia.  Given such a perceived lack of loyalty on the part of Germany to the Anglo-American Axis (AAA), anything now goes.  The CIA, MI6 and MOSSAD have already proven that they will do ANYTHING to enforce the dictates of the AAA tyrannical leadership.

Especially during the current shaky and very tenuous phase of the US and UK economies, will no departure from the party line be tolerated.   That includes a firm commitment, by every EU nation, to uphold their end (imposed, of course) of the sanction regime against Russia.  Only in this way can Russia be sufficiently softened up before the next phase of the planned World War III. The AAA knows that if Germany were to leave the reservation, whether conspicuously or secretly, their leverage against Russia would completely fall apart.

Spain was also targeted by this ‘terrorist’ attack

Not only were 72 Germans aboard the Germanwings flight, 35 Spaniards were also killed in this state-sponsored ‘terrorist’ operation.  Of all the members within the Eurozone, Spain has been viewed as perhaps the weakest link where it concerns the AAA-fabricated strategy to relentlessly persecute and propagandize against Russia.  As follows:

“Spain is widely seen to be one of most sympathetic countries to Moscow (along with Greece, Italy, Hungary and Bulgaria) and is one of the most openly reluctant to taking a hard line with Russia. This Spanish policy produces irritation and incomprehension in other European societies, particularly among Russia’s neighbours.”
(Source: Spain and the European Union-Russia Conflict: The Impact of the Sanctions

As usual, there are now many articles covering this matter present different perspectives on why everything we are being told by the Mainstream Media (MSM) is patently false. Therefore, it can only be deduced that yet another coverup has been fastidiously put into place. One really wonders how much of history is really just an overwhelming assortment of coverups, since the MSM only seems to know how to misrepresent there facts.

What really happened in the pilot’s cabin?

Regardless of all the many conspiracy theories which have been advanced across the internet, it is impossible to know what exactly caused Germanwings Flight 9525 to crash into the Alpine mountainside.  As usual, the Mainstream Media has been given a narrative so ridiculous that it can only be a coverup for a much more sinister plan.

At the end of the day there are many much more plausible theories about what happened.  However, it can be said that the one chosen by the global power structure will certainly do much to shake the confidence in the German Airline Industry.  Who, after all, would feel comfortable flying in such a unpredictable and dangerous climate.  Germans are well known for their strict process and procedure — ABOUT  EVERYTHING — therefore, if such a tragic episode can unfold on a German airliner, all others are even more vulnerable.

There are several reasons why the current institutional line of inquiry is both unreasonable and lacks common sense.  For example, where precisely are the black boxes and why are they always mysteriously missing from the scene of the crime(s). If the world was given access to the original Germanwings 9525 black box, most questions could be conclusively answered. However, the black boxes are never provided to the people, the media, or independent investigators who have no interest but arriving at the truth.

Bear in mind that black boxes are designed to withstand virtually any degree of impact since that is the typical situation in which their data would be the most needed. Nevertheless, those who control the possession of the black boxes are forever secretive about their whereabouts and/or condition, as well as evasive regarding the content of the recordings.

The current state of affairs in airline travel is to be expected from those who really do have a dog in this fight. After all, nothing less than critical strategic positioning on the global geopolitical chessboard is at stake.  What the world is really witnessing is a planetary war for the total control of the Earth’s resources as well as the complete domination of the community of nations.

Given the true condition of the worldwide economy, it is understandable that the Western side of this intercontinental conflict is doing everything possible to enhance the likelihood of a World War 3. Truly, it is their only way out of an increasingly oppressive and untenable predicament.  However, the nations of the world are now much too privy to their warmongering ways through false flag attacks, operations, assassinations, etc. for these ploys to be as efficacious as they were in the past.

In other words, the Anglo-Amercian Axis really does know that they are at the end of an era dominated by corrupt, corporate, crony capitalism. Their destructive form of exceedingly predatory capitalism compels them to do what ever it takes to prevent their house of cards from falling down. Unfortunatety for many, there are now whole countries that are caught in the crossfire, just as the passengers on Germanwings Flight 9525 were.

Germany Looks to Russia and China