On Thursday morning, we took an in-depth look at what the progression of events is likely to be in the event a cash-strapped, negotiation-weary Greece finally, for lack of will or for lack of options, fails to scrape together enough cash to pay its creditors. As BofAML notes, a missed IMF payment and/or failure to make interest payments to either the ECB or private creditors over the coming weeks would likely lead to default within 30 days, at which point “mark-to-fantasy” becomes mark-to-market and then “mark-to-default” in very short order.

Although Greek officials came out midday with a “categorical” denial of reports that the country was set to run completely out of cash in just 7 days, it now appears Athens may be prepared to chance a missed IMF payment and all that comes with it if it means saving face and preserving Syriza’s campaign promises to the beleaguered Greek populace.

More, via The Telegraph:

Greece is drawing up drastic plans to nationalise the country’s banking system and introduce a parallel currency to pay bills unless the eurozone takes steps to defuse the simmering crisis and soften its demands.

Sources close to the ruling Syriza party said the government is determined to keep public services running and pay pensions as funds run critically low. It may be forced to take the unprecedented step of missing a payment to the International Monetary Fund next week.

Greece no longer has enough money to pay the IMF €458m on April 9 and also to cover payments for salaries and social security on April 14, unless the eurozone agrees to disburse the next tranche of its interim bail-out deal in time.

“We are a Left-wing government. If we have to choose between a default to the IMF or a default to our own people, it is a no-brainer,” said a senior official…

“They want to put us through the ritual of humiliation and force us into sequestration. They are trying to put us in a position where we either have to default to our own people or sign up to a deal that is politically toxic for us. If that is their objective, they will have to do it without us,” the source said.

Going into arrears at the IMF – even for a few days – is an extremely risky strategy.

No developed country has ever defaulted to the Bretton Woods institutions. While there would be a grace period of six weeks before the IMF board declared Greece to be in technical default, the process could spin out of control at various stages.

Syriza sources say are they fully aware that a tough line with creditors risks setting off an unstoppable chain-reaction. They insist that they are willing to contemplate the worst rather than abandon their electoral pledges to the Greek people. An emergency fall-back plan is already in the works.

“We will shut down the banks and nationalise them, and then issue IOUs if we have to, and we all know what this means. What we will not do is become a protectorate of the EU,” said one source.

It is well understood in Athens such action is tantamount to a return to the drachma, even though Syriza would rather reach an amicable accord within EMU.

As a reminder, here is Goldman’s take on what redenomination would mean for Greece:

Secluded from international capital markets, Greece would not be able to issue a globally traded currency

With senior liabilities outstanding, Greece would be secluded from international capital markets. This would not just hold for the Greek government. It is likely that the implications touch the Greek private sector too, with Greek exporters and importers not being able to rely on letters of credit provided by Greek institutions.

In such a case, Greek trade would collapse to the level that can be sustained by cash businesses in Euros.

Should a Greek currency be introduced following failure to pay, it would likely have very limited convertibility into Euros outside Greece. It would purely be a means of internal transactions, in all likelihood.

But is this an equilibrium solution for Greece? No. Because in such an event, it would be hard to convince even the Greeks to hold any drachmas. Put simply, while public sector employees, pensioners and government supply providers would be paid in drachmas (and be expected to pay part of their tax liabilities in the new currency), they would not be able to use that currency to buy imported goods.

Exported goods would also become too valuable to be bought in drachmas, as they would correspond to hard currency receivables. Anticipating this, even providers of domestic services (taxi drivers, hairdressers etc) would avoid receiving payments in drachmas if possible.

If at all, the drachma would trade at a huge discount to the Euro. The economy would remain largely euro-ised but without a natural source of Euro-liquidity…

Ultimately as we discuss in our note with Huw Pill, it would be very hard for Greece to introduce a viable new currency unilaterally. Baring the complications of actually printing a new note, such a move would likely lead to a collapse in Greece’s international transactions and trade (both for the government and the private sector), would expose the country to litigation risks and trigger a significant destabilization of the banking system.

The only function of such a new currency would be to “tax” parts of the population that would not naturally receive hard currency as part of their payments structure. But that tax would not lead to a natural increase in government receivables as the economy (both the internal and the external economy) would shrink in a downward spiral.

So now, just as we predicted two weeks ago, Goldman (and anyone else who had effectively ruled out the possibility that Greece would finally reach a breaking point and fire up long-dormant national printing presses) may have to revise and rethink their assessment as the final curtain looks set to fall on the long-running tragicomedy that is the Greco-Euro standoff.

Here’s what Greece owes to who and when… 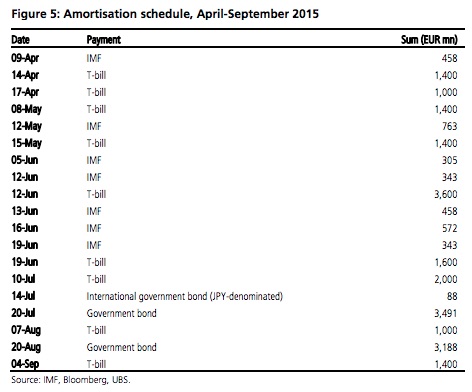 …and here’s what happens next:

The people of Greece need to protect you financial assets from default & devaluation with physical gold and silver. 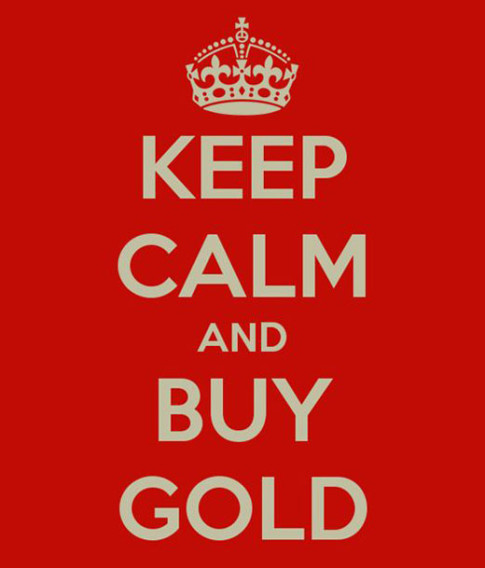