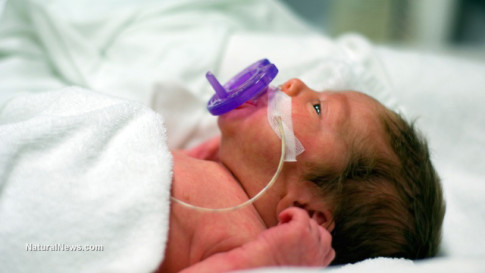 – Glyphosate detected in feeding tubes given to babies and children with cancer (Natural News, Jan 6, 2015):

An unthinkable, (although not entirely surprising), discovery has been made by a group called “Moms Across America,” a coalition of mothers fighting to raise awareness and support regarding the dangers of genetically modified organisms (GMOs) and their associated pesticides.

Thanks to contributions provided by sponsors and private citizens, Moms Across America funded an experiment that tested feeding tube liquid used in a pediatric rehabilitation hospital where one of the group’s supporters is employed.

To say the findings are alarming would be a severe understatement.

According to the results, 6 out of 20 (30 percent) samples of Pediasure, a supposed “nutritional” drink given to ill children in the pediatric unit, tested positive for unsafe levels of glyphosate.

Remember, glyphosate is the primary ingredient found in Monsanto’s Roundup, and is also the most widely used weedkiller in the U.S. Glyphosate application has more than doubled in recent times, increasing from around 90 million pounds in 2001 to 185 million in 2007, according to statistics provided by the Pesticide Action Network (PAN).

The pesticide has been linked to toxicity in humans, resulting in cancer, reproductive and developmental complications and neurotoxicity. It’s also been directly linked to non-Hodgkin’s lymphoma, as well as other serious health effects.

Moms Across America reports that Microbe Inotech, a lab in St. Louis, Missouri, tested Pediasure samples from the same batch, detecting glyphosate levels above 75 parts per billion (ppb) at 800 to 1,110 times higher than has previously been proven to destroy gut bacteria in chickens, or 0.1 ppb. Another study found that 50 parts per trillion (ppt) induced liver, kidney and sex hormone changes in rats.

“These samples were sent by a Moms Across America supporter.This [sic] is the exact brand used in the pediatric rehabilitation hospital where she worked and was fed patients needing tube feeding in critical care,” reports a blog post by the group.

Moms Across America finds it appalling that our health care providers have been led to believe this feeding tube liquid is safe. Our children and loved ones who are depending on our health institutions to support their immune system and recovery. Instead they are being fed a liquid which scientists and knowledgeable care givers now believe is doing the exact opposite.

The Pediasure Enteral Nutritional Drink tested is loaded with GM corn syrup, soy, and sugar, which have been shown to cause inflammation, and are sprayed with gyphosate [sic] during the growing season and at harvest as a drying agent.

The harm caused by glyphosate seems endless, as the chemical routinely disrupts most living processes. Studies conclude that Roundup — in various forms — acts as an endocrine disruptor, responsible for declining male reproductive health and sperm counts, according to GMFreeCymru.org. The rise in autism has also been attributed to increases in glyphosate application.

The controversial detection of glyphosate in feeding tubes being administered to sick children has many outraged. One popular food activist, Vani Hari, also known as “Food Babe,” expressed her disgust in a comment on the group’s findings.

This report is absolutely ground breaking for parents everywhere. We need to keep our children safe from these toxic chemicals. Our regulatory agencies have failed us and have let Roundup be carelessly used for too long. The worse part? The American public doesn’t have the right to know which food doesn’t have it. This must stop and is reason enough to avoid the use of any GMO technology that is tied to this chemical. — Vani Hari, Food Babe