As we explained over the weekend, should the Swiss gold referendum pass successfully, the price of gold will surge. It was none other than JPM who warned that the “markets under appreciate this event”, explaing that “If the referendum is passed, the Swiss National Bank (SNB) will be forced to increase reserves by around 1,500 tonnes over five years, i.e. 300 tonnes per year. This 300 tonnes per year accounts for 7.5% of annual gold demand of 4,000 tonnes per year.”

Well, even as the SNB has been scrambling to make the referendum seem like a non-event, with very little chance of passing, moments ago Deutsche Bank released a piece that roundly refuted everything the Swiss Central Bank has been peddling. To wit, here is a note just out from DB’s Robin Winkler:

The proposal requires a simple 50% majority to pass (Volksmehr), with the further proviso that there be a majority in at least 50% of Switzerland’s 26 cantons (Ständemehr). There is no minimum turnout. The Ständemehr is the lower hurdle, since the vote is biased towards smaller, conservative cantons more likely to vote yes. In the absence of official polls, the proposal’s likelihood of success can only be gauged from polls conducted by newspapers and other media outlets. The most respected polls are published by the radio and TV platform SRG. According to their latest poll (another poll is due next week), 44% of respondents intended to vote in favour of the amendment, with 39% rejecting it.

Swiss pre-referendum polls commonly see the share of ‘no’ votes rise during the lead up to the actual vote, as the political and business establishment ramp up campaigns against radical proposals. However, it is important to note that the Swiss vote on three separate referenda on 30 November. Most of the political debate has concerned the ‘EcoPop’ initiative which seeks to curtail immigration to Switzerland based on a quota system. Some observers fear that the political focus on the immigration debate might lead voters to pay less attention to the gold proposal. There is also a concern that moderately conservative voters uncomfortable with the anti-immigration initiative might vote in favour of the gold proposal in compensation.

The SNB should face little technical difficulty in repatriating its gold within two years. Switzerland stores about 300 tonnes of gold abroad, almost exclusively in the UK and Canada. History suggests that this gold could be shipped to Switzerland within a short period of time (for more detail, see appendix). It would be easier to repo Swiss gold held abroad and insist on physical delivery upon expiry, or to sell the gold abroad to fund contracts deliverable over the next five years. Counterparties could source the gold to be delivered most cheaply in Switzerland itself, given the country’s large private holdings

Well, after Germany’s miserable failure to reclaim its gold when the Bundesbank received a tap on its shoulder “strongly hinting” the NY Fed and BNP may have serious procurement problems of gold that is ‘already there’, it appears at least one European nation is about to have access to its gold, and judging by the increasing warnings about the global fiat bubble popping by none other than the BIS (yet again, more shortly), probably not a moment too soon.

As for the SNB being easily “able to repatriate its gold holdings from abroad” we appreciate the optimism, just don’t point out to the DB analyst that 6 Month GOFO just want negative once again even as 1M GOFO rate hit the most negative it has been since… 2001! 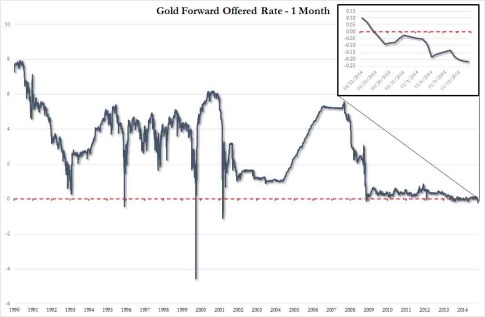