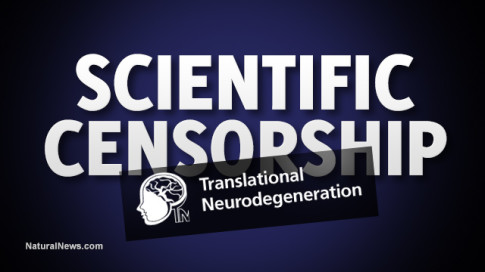 Yet another astonishing development has taken place that demonstrates the extraordinary degree of scientific censorship being pursued to bury the story about scientific fraud at the CDC. The science journal Translational Neurodegeneration has pulled a data analysis study conducted by Brian Hooker, who published a re-analysis of CDC data regarding MMR vaccines and autism. The journal web page which previously showed the full abstract of the study now reads:

This article has been removed from the public domain pending further investigation because the journal and publisher believe that its continued availability could cause public harm. Definitive editorial action will be taken once our investigation is complete.

The statement goes on to explain “The complete article is available as a provisional PDF.” but that PDF has also been desperately deleted.

Every effort has been made by this journal to memory hole this scientific research, no doubt under pressure from the CDC and the vaccine industry.

No scientific errors were found

Importantly, the journal Translational Neurodegeneration did not find any scientific errors with the study. The paper has not been officially retracted. It has simply been manually deleted from the journal’s website in order to avoid the public from reading it.

Here’s the screen shot of the online book burning conducted in the name of “science:” 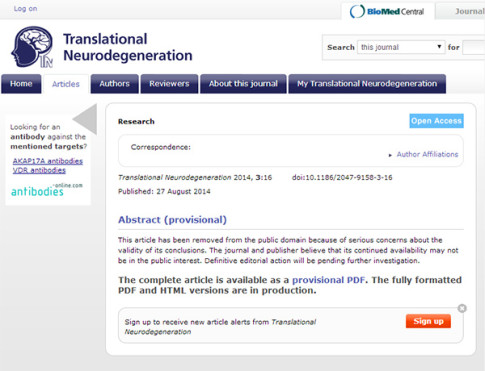 This is scientific censorship at its most offensive. We are witnessing the collapse of the very idea of the scientific method which must, by definition, allow for questioning the status quo. Under the censorship watch of the vaccine industry, the modern world of science is devolving into the Church of the 16th century, where absolute faith was demanded of all, and any who dared question that faith were branded heretics.

Astonishingly, the Translational Neurodegeneration journal says that allowing the public to read this scientific abstract could “cause public harm.” This is uttered with the same vitriol that the Church once used against Galileo, who was persecuted for his scientific beliefs and whose books were banned and burned for two hundred years. In those days, the Church declared that allowing the public to read about a heliocentric model of the solar system would also “cause public harm.”

Little has changed since then: Knowledge and truth are always suppressed by systems of control in order to prevent the public from learning.

Today’s censorship of Brian Hooker’s work is extraordinary, considering that the data used to write the paper was provided to Brian Hooker by a top CDC scientist who has now publicly admitted to committing scientific fraud that resulted in vaccines harming countless African-American children over the last twelve years. If anything, the new paper by Brian Hooker would help prevent harm among more African-American children. Yet the science journal somehow claims that Hooker’s study data is so incredibly dangerous that the mere READING of the abstract will constitute harm to the public.

This is a crucial point to note in all this: The very foundation of modern-day vaccine mythology is so fragile that the industry is entirely unable to withstand scientific scrutiny. The mere asking of questions or publishing of CDC data is so dangerous to the vaccine industry that all such activities must be immediately and aggressively crushed.

In observing this, I dare say that any “science” which cannot withstand scientific scrutiny is no science at all. This wholesale attempt by the CDC and the vaccine industry to crush skepticism and erase published papers is an outright admission that the vaccine industry is little more than a house of cards. No body of science grounded in solid evidence would ever fear a few honest questions from independent researchers.

What you are witnessing here is nothing less than a scientific book burning — a deliberate effort to destroy and censor the science that the establishment doesn’t want the public to see.

It begs the question: What could be so dangerous in Brian Hooker’s analysis of CDC data that it merits an online book burning?

The answer is that Hooker’s study isn’t dangerous to the public but rather dangerous to the credibility of the CDC and the vaccine industry — an industry steeped in criminal operations, money laundering, quack science and literal genocide.

By any means necessary, the public can never be allowed to learn the truth about the link between MMR vaccines and autism. This truth must be silenced at all costs, for if the public learns this truth, they will never trust the CDC again (and the whole vaccine house of cards will implode).

It’s important that we all keep our terminology straight.

When the government forcibly injects African-American babies with vaccines like we saw taking place in Maryland, that’s highlighted as “Good medicine.” When a scientist working at the CDC goes public and admits to over a decade of scientific fraud regarding those vaccines, that’s declared “Non-news” and censored by the entire mainstream media.

The conspiracy of silence on vaccine damage to children knows no bounds. Government, media and science journals all actively conspire to shut down anyone who dares engage in actual scientific scrutiny of vaccine safety. The vaccine industry is the one place where science is absolutely NOT allowed.

Why the vaccine industry is technically a cult

To have any career at all in government, the media or the science journal industry, you must pledge absolute and unswerving FAITH in vaccines, regardless of what the evidence reveals. You must cast aside any real pursuit of actual science and swear allegiance to a dogmatic medical cult which worships vaccines as sacred artifacts of perfection which can never be questioned.

The scientific method be damned, vaccines are automatically assumed to be perfect and therefore no questions can ever be raised about vaccine safety or efficacy. Vaccines are assumed to never cause harm to anyone, therefore anyone who even dares to ask whether vaccines are safe must be immediately and aggressively censored, fired, threatened and shut down.

Vaccines are to science what Kim Jong-Il was to liberty. The “vaccine regime” is entirely based on authoritarian scientific censorship which is perhaps best described as a “scientific dictatorship.” There is no freedom of thought when it comes to vaccines; all thoughts must conform to the status quo or be relentlessly disparaged. I make these statements with the same courage and truth that Galileo invoked when he uttered, “Facts which at first sight seem improbable will, even on scant explanation, drop the cloak which had hidden them and stand forth in naked and simple beauty.”

When it comes to vaccines, all science has been abandoned and replaced with the “consensus of the faithful” — a delusional agreement among vaccine cult followers to accept on sheer faith the idea that vaccines are perfect medicine. More importantly, this belief system requires adherence to the even more bizarre belief that when toxic substances like mercury are added to vaccines, they magically become “perfect” additives which are rendered harmless by decree.

How the vaccine industry fell in love with a poison

This is how mercury, one of the most toxic elements in existence today, continues to be added to vaccines alongside widespread declarations that mercury in vaccines is “completely safe” to be injected into the bodies of children and pregnant women.

When mercury exists outside the realm of vaccines, it is widely considered to be extremely toxic to neurology and the environment. Mercury emissions from coal-fired power plants, for example, are condemned by the EPA and environmental groups as extremely harmful. Mercury in fish is condemned by the FDA as toxic to expectant mothers. Mercury in fluorescent light bulbs is widely known to be so toxic that when you break one of these bulbs, you’re technically supposed to call for a hazmat team cleanup.

And yet, as if by magic alone, mercury in vaccines is universally declared “safe.” This is obviously accomplished solely because of the magical aura of vaccines which impart a spell of safety to all chemicals added to vaccines. “Magic” is the only explanation remaining for this, and it is this magic which is routinely invoked by the vaccine industry to explain why they knowingly use toxic mercury in their products.

This toxic mercury is so safe, we’re told, that vaccines cannot possibly cause damage to anyone. The vaccine industry is so sure of this that they managed to strong-arm Congress into passing laws that grant the vaccine industry absolute legal immunity from all damage caused by their products. How’s that for safety? This legal immunity, we’ve learned, holds a higher power than the U.S. Supreme Court. It is the highest power of the land and cannot be pierced by any legal strategy of any kind.

This delusional belief in the safety of mercury has transformed the vaccine industry from one that originally sought to help humanity to a system of mass medical poisoning and racial genocide which now exists primarily to prop up vaccine profits and create future medical patients for the pharmaceutical industry.

Join the protest against Translational Neurodegeneration for its brazen scientific censorship

Join Natural News in protesting the outright scientific censorship carried out by Translational Neurodegneration by emailing their editorial offices at:

This journal is owned by BioMed Central and is based in London. Here’s more contact info:

Let them know that we demand Brian Hooker’s abstract be restored for public viewing. The scientific book burning must stop.