As the NYT observes, “based on Pentagon studies, court records, analyses of thousands of pages of data, and interviews with current and former military health officials and workers, indicates that the military lags behind many civilian hospital systems in protecting patients from harm. The reasons, military doctors and nurses said, are rooted in a compartmentalized system of leadership, a culture of interservice secrecy and an overall failure to make patient safety a top priority.”

One would think that when caring for the nation’s veterans, the healthcare system – whose very existence one can say is a direct function of the US military’s intervention around the globe – would pay particular attention. One would be wrong:  the military’s reports show a steady stream of the sort of mistakes that patient-safety programs are designed to prevent.

The most common errors are strikingly prosaic — the unread file, the unheeded distress call, the doctor on one floor not talking to the doctor on another. But there are also these, sprinkled through the Pentagon’s 2011 and 2012 patient-safety reports:

The NYT slams a system rife with abuse: “The patient-safety system is broken,” Dr. Mary Lopez, a former staff officer for health policy and services under the Army surgeon general, said in an interview.

“It has no teeth,” she added. “Reports are submitted, but patient-safety offices have no authority. People rarely talk to each other. It’s ‘I have my territory, and nobody is going to encroach on my territory.’ ”

In an internal report in 2011, the Pentagon’s patient-safety analysts offered this succinct conclusion about military health care: “Harm rate — unknown.”

In short, America’s veterans and military forces: proud recipients of the worst health care America has to offer.

We sincerely urge US veterans to avoid the following military hospitals like the plague. 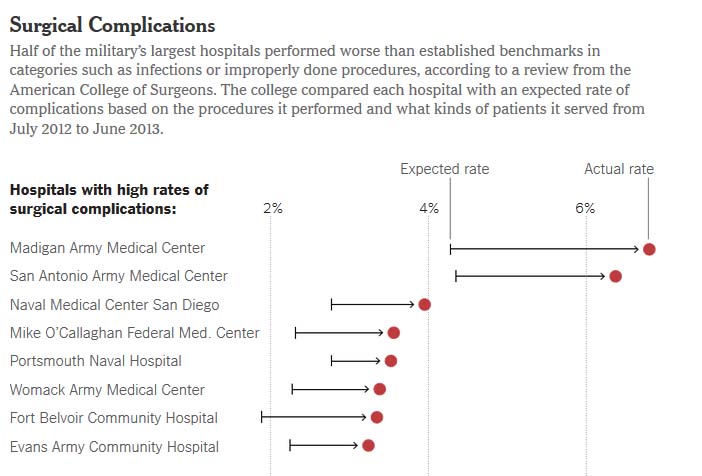