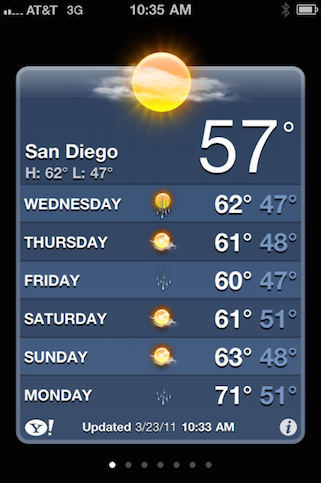 Compliments of the military industrial complex owned weather service, you can now know when to expect a chemtrail spraying. Yes, they not only own the weather as they said they would, but they also conveniently own the weather forecasting services. George Orwell would be proud.

Check your phone and look at the forecast image. If you see the hazy cloud formation over the sun it could very well be a chemtrail forecast.

Take a look outside regularly and study the skies. Watch a normal clear sky get erased by lines or later stage chemtrails drifting in. Now look how it was predicted on your phone versus the natural day you would normally expect. It’s not normal atmospheric conditions in most cases, it’s an engineered phenomenon.

Yes, the “weatherman” is in on it and of course they know the spray days and locations. All of this is to make it look “natural”. And the weathermen know, and have been bought off and co-opted, they don’t dare speak the truth or they’ll lose their jobs…or more.

I’ve studied this a long time, as have many others, and it couldn’t be any more obvious. If you’re willing to look and connect the dots.

A truly clear sky in most cases will reveal a brownish horizon for anyone in a major population area. Even a clear sky is not truly clear any more, as the planet has been “dimmed” by over 20% after decades of spraying. Regular pollution, however, is never white, it’s dark and usually lays low. When white supersedes the brownish pollution is when we’re being sprayed. If it’s not there yet, it’s on its way.

One of their ploys is to lay the banks of chemtrails way out at sea if you live near a coast line, and float them on shore, so they appear to be natural weather changes. You can spot the tell-tale signs that these are chemtrail or chemtrail augmented clouds by the way they hang or disperse. Chemtrails do attract water vapor under certain conditions and sometimes morph into more natural looking formations. Usually, however, there’s not a lick of natural moisture and there’s obvious linear or criss-cross patterns as they arrive overhead. At that point they often fill them in from what they started out at sea, as they spread to cover the sky.

Keep looking as they come over –they’ll often separate out as they float overhead and you’ll see the lines of chemical sprays dispersing at different rates and configurations, clearly not natural clouds by any means.

They don’t spray during windy days over about 25mph, although they do spray above clouds, snow and rain, and even at night. Just wait for a break in the clouds or view the night sky and check for the obvious trails or dendrite-like spidery clouds. Those aren’t natural. They’re spreading chemtrails of different lengths to appear normal.

The Weatherman Is In On It?

It it any wonder, when Raytheon is involved?

All weather forecasting and reporting is now routed through this central Raytheon system. No wonder the weatherman won’t say a peep about chemtrails and they don’t even show up on TV radar–it’s doctored. Chemtrails and their cover up is a concerted, military complex controlled effort. Welcome to Orwellia.

And it only follows that they’re also involved with HAARP-like electromagnetic steering technology to manipulate weather patterns. Nice one-two punch. The military industrial complex rolls on, disturbing natural weather patterns at will while the populace is being told it’s “climate change” for whatever reason of the day.

More on Raytheon, HAARP, Chemtrails and the Weather

Raytheon Corporation, the world’s fourth largest military weapons command, fabrication, and contracted
operations facilitator, bought the HAARP patent after only a short time, effectively
placing the US Air Force and US Navy in the power seat without labeling them
so. Raytheon is the same corporation, at a standoff with Northrop Grumman,
who runs the US Air Force’s federal jetliner aerosol programs for military radarweapons
conductivity enhancement, which is openly stated as “global warming
mitigation.”

Thus, weather reporting, for businesses and scientific organizations everywhere, is custom-tailored
for publishing as the Department of Defense manipulates it to be through
their various programs. Source

These are nasty people; mad military fake scientists experimenting, or with worse intentions, on our planet and its people.

And please keep exposing them. The darkness cannot stand the light of Truth.

P.S. Chemtrails in the news in California before the total media clampdown: HERE