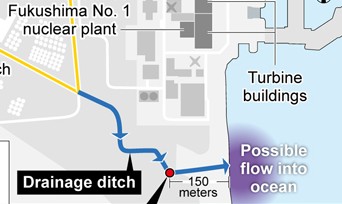 Graphic shows strontium water flowing directly into Pacific from a point outside Tepco’s harbor — Yet it was only yesterday that Prime Minister Abe once again claimed that radioactive contamination was contained with the harbor (SOURCE: Asahi)

NHK, Oct. 17, 2013: High radioactivity in Fukushima Daiichi ditch […] [Tepco] says it has detected high levels of radioactivity in a ditch leading to the sea, after Typhoon Wipha brought heavy rain. […] [Tepco] detected 1,400 becquerels per liter of beta ray-emitting radioactive material at a measuring point 150 meters from the sea on Wednesday. The figure was […] more than 70 times higher than readings taken on Tuesday. It’s also the highest since monitoring of the ditch water was started in August. Officials say rain from the typhoon caused contaminated soil to flow into the ditch and created the high radioactivity. […] Officials also say they will assess the effects on the surrounding sea.

3 thoughts on “Fukushima: Giant Spike In Radiation Levels After Typhoon Wipha – High Levels Of Strontium May Have Been Flowing Directly Into Pacific Ocean”