“Attacking Iran? WW III that is!” 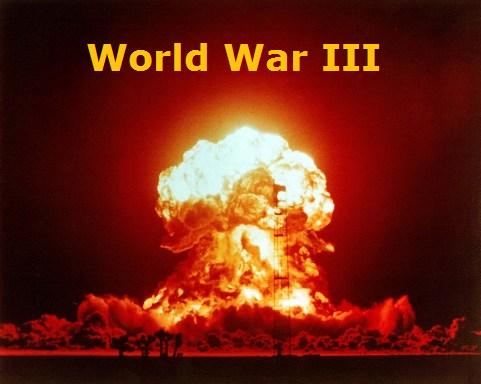 In a stunning betrayal of the Constitution of the United States, which, under Article VI grants treaties the same status under the Constitution as the Constitution itself and therefore obligates the United States to conform to the UN Charter and international law to which it is bound by treaties, the US Senate has passed a resolution that commits the nation to support Israel militarily, diplomatically, and economically should it decide to attack Iran “in its legitimate self-defense”, where every action Israel has ever taken–from the Six Days War to its incursions into Lebanon–has been deemed by the American government to be “in its legitimate self-defense”. The vote taken on Wednesday, 22 May 2013, astoundingly, was 99-0.

If the Government of Israel is compelled to take military action in legitimate self defense against Iran’s nuclear weapons program, the United States Government should stand with Israel and provide, in accordance with United States law and the constitutional responsibility of Congress to authorize the use of military force, diplomatic, military, and economic support to the Government of Israel in its defense of its territory, people, and existence.

As M.J. Rosenberg has observed,

Rand Paul (R-KY) has been doing what he can to tone down the resolution, but whether he can prevail is yet to be seen.  While this is a non-binding resolution that does not have the force of law in committing the nation to support Israel under these circumstances, it does express “the sense of the Senate”. While the President is obligated by the Constitution to seek its “advice and consent”, this commitment violates international law and the UN Charter and therefore the Constitution itself.

At the very least, AIPAC should be required to register as a “foreign agent”. Its virtually complete domination of American foreign policy has led wits to describe the US as “the United States of Israel”.  The problem is that this is not a joke, where “our gallant ally” is drawing us deeper and deeper into a conflict which has enormous potential to precipitate World War III.  It is a positive sign that Russia has intervened in Syria.  It will not stand idly by while Israel and the United States attack Iran.

Iran poses no imminent treat to the US or to Israel, where the stunning stupidity of the Senate resolution emerges from the reflection that (1) Iran has no nuclear weapons program, much less any nukes; (2) that the casualties from an Israeli attack on Iran’s nuclear energy facilities would be catastrophic; and (3) that Israel is not an ally of the United States, but is committed to advancing its own interests, regardless of the consequences for the US or, indeed, for the world at large.

(1) Iran has no nuclear weapons program

Iran not only has no nuclear weapons program but is a peaceful nation that has not attacked any other country for more than 300 years.  The Supreme Leader of Iran, The Ayatolla Khamenei, has declared, “Nuclear energy for all, nuclear weapons for none”.  Iran has signed the Nuclear Non-Proliferation Treaty and has allowed inspectors.  All 16 US intel agencies concluded in 2007 that Iran was not pursuing a nuclear weapons program, a conclusion that it reaffirmed in 2011.

Israel, by contrast, has more than 200 and as many as 600 of these little beauties. It has never signed the NPT and will not allow inspectors. The War against Terror was an Israeli contrivance to set the United States on a course to dismantle the sophisticated Arab states and leave Israel with uncontested domination of the Middle East.  Upon his return from serving as Supreme Commander, Allied Forces Europe, Gen. Wesley Clark was presented with a plan to dismantle seven Arab nations in the next five years.  Syria and Iran are the final stages of this Israeli plan.

(2) The civilian casualties would be catastrophic

Estimates have it that an Israeli attack on Iran’s nuclear energy facilities would bring about an estimated 1 million Iranian deaths outright and another 35,000,000 premature deaths as the cloud of pollution swept across Afghanistan, Pakistan and India.  Even if there were proof of an Iranian nuclear weapons program, what could possibly justify an atrocity of this magnitude?  Yet the US Senate would have our nation become complicit in one of the greatest atrocities of human history?

For the sake of comparison, according to the “official account”, some 6,000,000 Jews died during the Holocaust.  Set aside that the International Committee of the Red Cross maintained detailed records that support perhaps 600,000 deaths of Jews, gypsies and the mentally and physically impaired, Benjamin Netanyahu is willing to sacrifice six times the number of deaths alleged to have taken place during the Holocaust to promote Israel’s political domination of the Middle East.

(3) Israel is not an ally of the United States

The recent attack on Syria by Israel, which appears to have been intended to destroy a shipment of missiles and to take out a chemical supply depot, has had the unintended consequence of providing Russia with an excuse to speed up its delivery of its advanced S-300 missiles, which can be used for anti-aircraft and anti-ship defense and has greatly strengthened the ability of Syria to withstand attacks.  Indeed, there is every reason to believe that Russia is committed to standing fast with Syria.

Throughout this conflict, Obama’s actions have been disgraceful, where he (a) has supported Israel in taking such actions as it may deem appropriate (without adding, “provided they are in accordance with international law”), (b) is providing Netanyahu with refueling tankers and radar-suppressing aircraft to attack Iran (which I compare to placing a pedophile in charge of a day care center) and (c) continues to use drones in Pakistan (another violation of another nation’s sovereignty).

What this means is that the President of the United States, by encouraging Israel to violate the sovereignty of Syria and of Pakistan and to attack Iran, which poses no “imminent treat” to any other nation, especially to Israel with its vast stock of nuclear weapons, has become an accessory to  the violation of international law and to the commission of war crimes.  If Israel should launch an attack on Iran because it believes the US will support it, the stain on our history will be permanent.

It is all the more surprising that the US Senate remains so enthusiastic about its unqualified support for Israel, since we now have multiple confirmed reports of Israeli snipers having taken out more than 400 US troops in Iraq.  This is just about as disgusting as it gets and reveals decisively that Israel has only its own interests at heart and is willing to sacrifice even the welfare of American troops in combat to promote it, not to mention 36,000,000 innocents to advance its political agenda.

Senate Resolution: U.S. Will Go to War With Iran if Israel Does by M.J. Rosenberg

It is customary for Congress to pass resolutions commending Israel on the anniversary of its founding in 1948. Once these resolutions were innocuous with references to “making the desert bloom” and “ingathering” Jewish refugees. Standard “pro-Israel” boilerplate. No more.

In recent years Congress, with the Israel lobby’s eager assistance, has coupled salutations and congratulations with increasingly strident language about terrorism, Palestinians, and now, Iran. (For an excellent analysis on how the concept of being “pro-Israel” has degenerated in recent years, see this smart piece by Michael Koplow, program director of the Israel Institute at Georgetown University.)

One such anniversary resolution now being considered in the Senate and, with 79 cosponsors, certain to pass is Senate Resolution 65, introduced by Senators Robert Menendez (D-NJ) and Lindsey Graham (R-SC), two lobby stalwarts. It cleared the Senate Foreign Relations Committee yesterday.

The resolution begins with five clauses of standard rhetoric, noting that “since its establishment nearly 65 years ago, the modern State of Israel has… forged a new and dynamic democratic society including “freedom of speech, association, and religion; a vigorously free press; free, fair, and open elections; the rule of law; a fully independent judiciary; and other democratic principles and practices….” The usual fare.

Then, with no transition, it segues into 14 clauses condemning Iran with citations of President Mahmoud Ahmadinejad’s ugly language about Israel, his repeated Holocaust denials, the Islamic Republic’s human rights violations and then the threat ostensibly posed by its nuclear program.

That is followed by 13 clauses citing President Obama’s repeated promises not to permit Iran to attain a nuclear weapon, along with Congress’ own, which are even more aggressive.

All this is just the windup for the pitch which says that if Israel goes to war with Iran, the United States should join the fight. The resolution states:

If the Government of Israel is compelled to take military action in legitimate self defense against Iran’s nuclear weapons program, the United States Government should stand with Israel and provide, in accordance with United States law and the constitutional responsibility of Congress to authorize the use of military force, diplomatic, military, and economic support to the Government of Israel in its defense of its territory, people, and existence.

On the surface, this doesn’t sound that terrible. After all, it specifically limits our commitment to a situation in which “Israel is compelled to take military action in self-defense….”

In short, the Graham-Menendez resolution is telling Israel that if it goes to war, we will have their back.

The problem here is not that Congress is saying that the United States would support Israel if there was any chance that it might be defeated in a war with Iran or anyone else. That is obvious and has been since 1973 when the United States military was placed on its highest alert following the joint Egyptian-Syrian attack on Israel.

No, the point of this resolution is to tell Israel that it can go to war with Iran, with the assurance that if it gets into trouble, the United States will step in and finish the job. Israeli hawks need that assurance because it is generally understood that Israel cannot take out Iran’s nuclear facilities alone. It can only try if it knows that the United States is right there just in case.

The intent of this resolution is to eliminate any Israeli hesitancy about getting into a war it cannot win. Israelis won’t do that. Menendez, Graham and company are telling them not to worry. Just do it, and we are in too.