In what may be the most important story of the day, or maybe year, for a world in which there already is an $11 trillion shortfall in high-quality collateral (and declining every day courtesy of Ben’s monetization of Treasury paper) so needed to support the deposit-free liability structures of the shadow banking system (as most recently explained here), Bloomberg has just reported that Europe may begin a crackdown on that most important credit money conduit: the $80 trillion+ global shadow banking system, by effectively collapsing collateral chains, and by making wanton asset rehypothecation a thing of the past, permitted only with express prior permission, which obviously will never come: who in their right mind would allow a bank to repledge an asset which may be lost as part of the counterparty carnage should said bank pull a Lehman. The result of this, should it be taken to completion, would be pervasive liquidations as countless collateral chain margin calls spread, counterparty risk soars all over again, and as the scramble to obtain the true underlying assets finally begins.

Banks and brokers face a clampdown on using assets they hold for clients as collateral for their own trades as part of European Union moves to bolster market stability and rein in shadow banking.

The European Commission is weighing whether firms should have to obtain formal consent from their clients before being allowed to reuse assets to back other trades, according to a document obtained by Bloomberg News. The consent would be enshrined in a “contractual agreement” between the parties.

The handing over of collateral is an integral part of repurchase agreements, or repos — one of the activities under review by global regulators as part of their efforts to regulate shadow banking. The reuse of clients’ assets poses a potential threat to financial stability should one of a chain of firms that handled the securities go bankrupt, according to the document prepared by commission officials and dated May 15. Uncertainty about who holds an asset can fuel panic in times of market stress, according to the paper.

“Complex” chains of collateral can make it difficult for investors to “identify who owns what, where risk is concentrated and who is exposed to whom,” according to the document. “This has consequences for transparency and financial stability.”

Under the plans being weighed by the commission, banks and brokers holding securities for clients wouldn’t be allowed to reuse the assets for trading on their own account — speculation on the markets aimed solely at boosting their own revenues, according to the document.

The Financial Stability Board has estimated that the global shadow-banking system was worth $67 trillion in 2011, with EU-based activities accounting for about $31 trillion.

Here’s the kicker: collateral chains collapse on their own when confidence and faith in the financial system is evapoarting. This is usually manifested in soaring variation margin, and demand for delivery of collateral (which having been pledged at 10 or more different places just doesn’t actually exist).

In other words, the last thing Europe needs is to force the aftereffect of a plunge in systemic confidence to be imposed upon the market participants! And yet, it is doing just that.

And for a comparable virtualization of repo pathways in the US, here is a chart showing the key relationships as of 2009. For the modern iteration, just update $30 trillion with $80 trillion (including custodial “assets” State Street, BoNY and JPM). This is $80 trillion in custodial credit money created via repo. Just in the US. 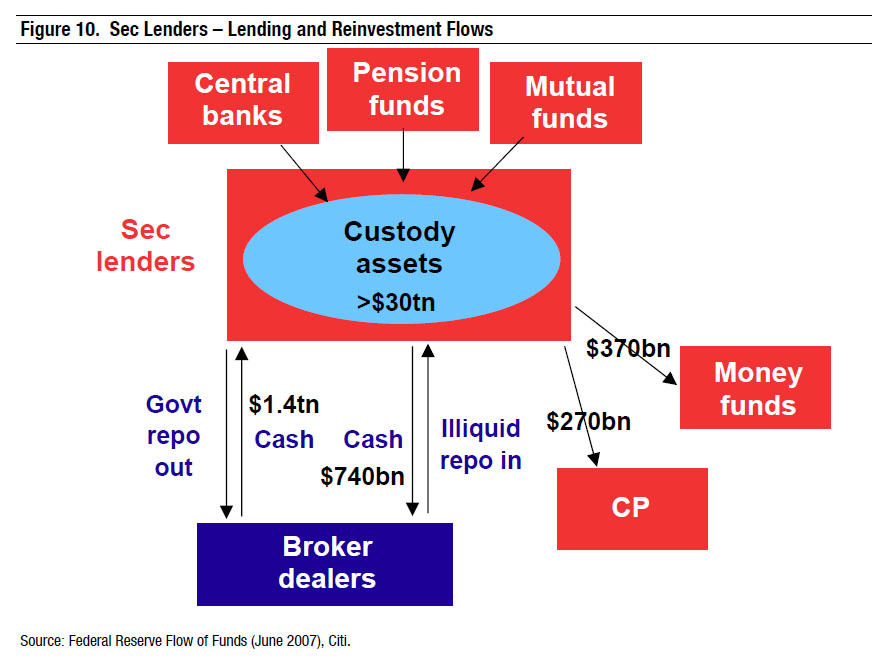 In other words, just as we have been warning for the past four years, Europe may pull the switch on its own electric chair. Among others, read: