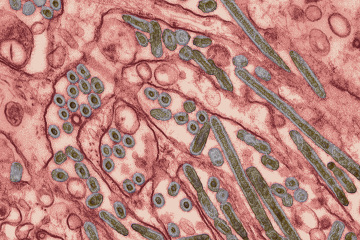 Researchers who voluntarily stopped work on a potent strain of influenza they created in the lab are hoping to end the moratorium on their studies.

In January 2012, scientists agreed to halt their research on the dangerous H5N1 avian flu–or bird flu virus–that they had manipulated to become more easily transmissible from person to person. H5N1 became known as avian influenza because it thrives in fowl populations, including ducks and migrating geese, and while it caused severe illness in people, the virus was less adept at jumping between human hosts, and presumably, among other mammals as well. Since 1997, when the virus was identified in Hong Kong, about 600 people have been infected and nearly 60% have died.

But two groups of scientists, one led by Ron Fouchier at Erasmus Medical Center in the Netherlands and another led by Yoshi Kawaoke at University of Wisconsin, independently managed to create strains of H5N1 in their labs that could pass between ferrets, marking the first time that a version of the avian flu could easily spread among mammals. The potential for a pandemic with H5N1, which, to date, may have a 50% mortality rate among those infected, was concerning enough to biosafety officials that the National Science Advisory Board for Biosecurity (NSABB) requested that scientific journals not publish the details of how the virulent strains of H5N1 were made. The papers, the officials feared, could serve as a how-to guide for human catastrophe if the results were used by bioterrorists.

The move by the NSABB was unprecedented, and outraged many in the scientific community, who felt politics and policy were interfering with the pursuit of science. However, the researchers agreed to a voluntary pause on their research so they could better explain the public health benefits of their work, as well as provide leaders in both the scientific and political communities time to determine the best way to proceed with and manage research that could have such dual purposes.

In the meantime, the scientists were asked to revise the papers they had submitted to the journals Science and Nature by removing some of the details of their methods, and in March 2012, the NSABB okay‘d the papers for public viewing. The results were sobering: Fouchier’s paper, published in June in Science, found that after replicating four to five times in ferrets, the virus began to mutate and eventually became airborne when the infected ferrets sneezed, with the power to infect and flourish in another animal.

But the voluntary moratorium on studying the virus remained. Now, the researchers, as well as others who also work on avian influenza, want to continue their investigations. Both the journals Nature and Science published a letter from 40 influenza experts who argue that H5N1 research should continue. The authors say that in the past year, the benefits of their studies have been fully explained and the World Health Organization has released laboratory safety recommendations for biosafety and security to contain the potentially pandemic virus. Only scientists working in countries that have proper biosafety plans in place, however, should resume their studies.

The controversy surrounding H5N1 virus transmission research has highlighted the need for a global approach to dealing with dual-use research of concern. Developing comprehensive solutions to resolve all the issues will take time. Meanwhile, H5N1 viruses continue to evolve in nature. Because H5N1 virus transmission studies are essential for pandemic preparedness and understanding the adaptation of influenza viruses to mammals, researchers who have approval from their governments and institutions to conduct this research safely, under appropriate biosafety and biosecurity conditions, have a public-health responsibility to resume this important work.

“We want the world to be better prepared than we currently are when an H5N1 virus poses a pandemic,” Fouchier said in a press conference. “We understand the risks associated with our research. We take every precaution to conduct H5N1 experiments safely. There can never be zero risk, but the risk can be minimized and managed. We have always followed the rules in the past and will comply with whatever additional guidelines and measures our governments deem are necessary.”

The researchers are adamant that the benefits of studying how H5N1 jumps from host to host, especially mammalian ones, outweigh the risks. Scientists whose work is funded by the U.S. government are not able to continue their studies until policy makers create proper guidelines and conditions for H5N1 research.

What are the researchers so eager to learn? At the top of their to-do lists are identifying the exact number and type of mutations required to make H5N1 more effective at airborne transmission, as well as determining whether the mutations could make other bird flu viruses infect human hosts more easily.

Some of the researchers’ frustration stems from the fact that while other countries have developed guidelines, the U.S. has yet to announce how much longer they need to wait. “If the U.S. would have said at the NIH meeting in November last year it would take another three months, we would probably have waited, but we did not get that answer,” said Fouchier. “It might take another one, two, three years…Now, many countries can do [this] research and…the question is should all countries really wait for the U.S. and why?”

The experience highlights how scientific pursuits are no longer simply the isolated studies of esoteric questions, but important endeavors that could have huge implications on global public health. And the need to discuss the wide reach of these studies, on government, policy and ethics, is becoming more critical. But, said Fouchier, those debates shouldn’t hamper or restrain science. “That global discussion is now ongoing. It’s not going end within a very short period and, therefore, this moratorium should stop because this discussion is going to take a few more years I believe,” he said. That’s time that we can’t afford to lose in the fight against microbes that are constantly changing and working to evade our best defenses.