The assault on the organic industry is in full swing today, and it’s an attack not merely on the industry itself but an attack on your sanity. If you “believe” in organic foods and non-GMOs, you are about to be labeled a delusional conspiracy theorist.

How do I know that? Because the lying mainstream media is rolling out the idea that organics are a “fable,” a fairy tale myth. In one of the most idiotic, corporate-serving editorials I’ve ever seen, New York Times columnist Roger Cohen starts off with the title, “The Organic Fable.” He then goes on to call organics a false “ideology,” sort of a like a pseudoscientific cult.

He says, “Organic is a fable of the pampered parts of the planet — romantic and comforting,” and talks about how it has “a cult following.” (http://www.nytimes.com/2012/09/07/opinion/roger-cohen-the-organic-fab…)

He then goes on to just flat-out lie to his readers, claiming the opposite of what the study he’s citing actually found. “…it found that organic food was not less likely to be contaminated by dangerous bacteria like E.coli,” writes Cohen. But of course that’s a lie. The study actually found significantly lower levels of antibiotic-resistant bacteria in organic meats, as is explained in the study conclusion itself:

…the risk for isolating bacteria resistant to 3 or more antibiotics was higher in conventional than in organic chicken and pork (risk difference, 33% [CI, 21% to 45%]). (http://annals.org/article.aspx?articleid=1355685)

The study even confirms this with a second sentence: “Consumption of organic foods may reduce exposure to pesticide residues and antibiotic-resistant bacteria.”

The New York Times’ Roger Cohen, then, is a confirmed liar. Or maybe his brain just doesn’t work right because he eats high quantities of dementia-producing pesticide chemicals. Perhaps he’s actually a victim of the very chemical pesticides and GMOs that he says are harmless.

Do you see where all this is heading? The push is on now to try to declare anyone who believes in “organics” to be mentally insane. It’s all being rolled out — the use of “non-scientific” terminology, the invocation of a “cult” mentality, the “fairy tale” verbiage.

With this editorial, the New York Times is saying that all consumers who buy organic products have a mental disorder. It’s probably only a matter of time before people who buy organics are “detained” at psychiatric hospitals for 72 hours of “observation” during which you will be force-fed chemical medications. They’re already doing this to U.S. veterans who question the political leadership of America, by the way. (http://www.naturalnews.com/036923_Brandon_Raub_thought_crimes_psychia…)

According to Roger Cohen of the New York Times, only the people who eat pesticides and GMOs have brains that work correctly. Everybody else is delusional. He writes, “the organic ideology is an elitist, pseudoscientific indulgence shot through with hype.” But eating chemical pesticides and genetically engineered foods containing toxins grown inside the grains is perfectly rational and intelligent, I suppose. It’s “scientific” to want to eat poison! All you morons who want clean food are delusional, Cohen insists!

Then Cohen goes on to demonstrate the depth of his own chronic delusion. This next paragraph, written by Cohen and published in the New York Times, is the more striking example I’ve seen yet of a true scientific psychosis possibly indicating the onset of dementia in the man’s own decrepit neural tissues:

Wow. Yeah, really. I’m not making this up. Cohen, who calls YOU delusional for believing in organics, says that chemical pesticides have been a gift to humanity! That GMOs are the answer! That “industrialized food” is the way forward! So you and I are idiots, he says, for believing in clean food raised without chemical pesticides, and we’re bad for humanity. Only more GMOs and chemicals will serve humanity, he insists. (Yeah, he really believes it, too…)

And then, just to show how truly off-your-rocker insane this guy really is, he spits out this sentence:

Whaaa? Logically? By what logic? Somebody buy some adult diapers! This guy is defecating all over the New York Times website with nonsensical words that reek of a scatological accident!

Roger Cohen wins our 2012 Idiot of the Year Award

2012 isn’t over yet, so you may wonder how we can grant our “2012 Idiot of the Year” award when there are still four months to go.

The answer is that I’m absolutely confident we will never encounter someone as idiotic as Roger Cohen. His act is impossible to beat. So the award is being granted today (see the picture below), and to celebrate it, I’m planning on sending Cohen some pesticides in the mail along with a request that he eat them on camera as a show of his loyalty to his own cult-like beliefs in poisonous chemicals. Oh wait, maybe I’d better not do that because sending toxic chemicals in the mail is a federal crime and considered an act of terrorism. Chemical weapons, you see, are illegal to MAIL someone, but Roger Cohen wants you to EAT them.

So let me be the first from the organic movement to encourage Roger Cohen to eat more pesticides, Roger! The sooner you poison yourself with chemical pesticides and thereby disable whatever remaining brain cells are somehow still firing in your compromised skull, the better off we’ll all be as a result. If this sounds mean, remember that according to Cohen, eating pesticides is GOOD for you! So I’m really only encouraging Cohen to eat more of what he claims is nutritious: GMOs and chemical pesticides. Yum!

To Roger Cohen, I say: If you want to believe on your own delusions of how healthy and wonderful chemical pesticides and GMOs are for human health, go ahead and eat more. Make my day. But don’t you dare call the far-better-informed organic consumers delusional and cult-like for knowing there is a real, qualitative difference between organics versus conventional crops. You only make yourself look like a complete fool while proving to the entire world that eating more pesticides results in a striking loss of cognitive function.

You, sir, are a victim of your own pesticide delusions. 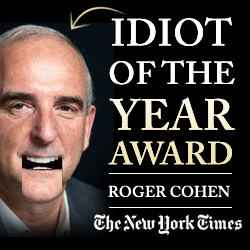 The URL of the Roger Cohen’s delusional propaganda piece is here:
http://www.nytimes.com/2012/09/07/opinion/roger-cohen-the-organic-fab…

Tweet out the URL of this NaturalNews article and help spread the word. Let Roger Cohen know that if he’s going to declare organic consumers to be delusional cult-members, he’s going to hear from a few of them as a result.

This guy is a maniac. A danger to society. Somebody put together a petition calling for Roger Cohen’s firing from the New York Times, and we’ll get behind it and publicize it. Send us the details through our tips page: http://www.naturalnews.com/newstips/NewsTips.asp