Just because Italy’s 2 Year bond yield has plunged, bringing its cost of short term funding to manageable levels, if only for a day or two, it is suddenly “obvious” that it will not need Germany’s goodwill ever again. Sure enough… 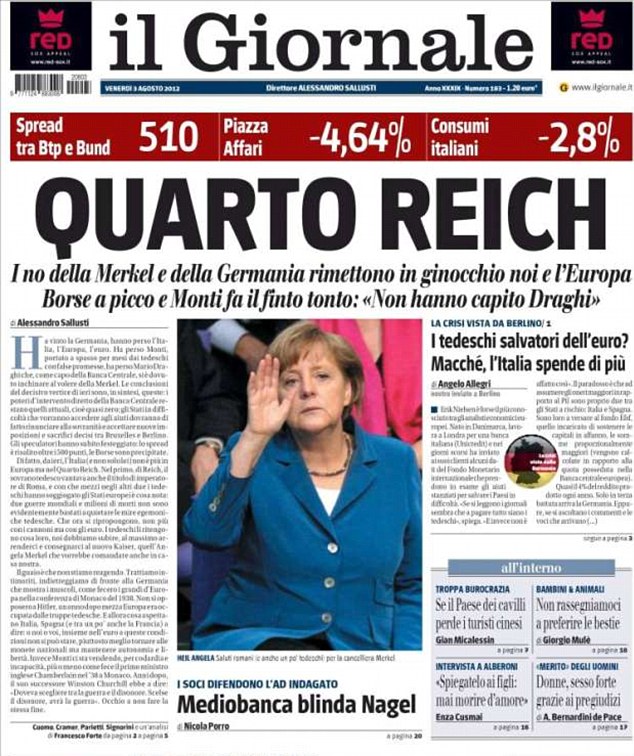 The article, which was published on Friday, has heightened a bitter war of words between Italy and Germany over the handling of the ongoing Euro crisis.

The angry article attacked tough talking Chancellor Merkel saying that her intransigence had brought ‘us and Europe to its knees’ adding that ‘Italy is no longer in Europe but in the Fourth Reich.’

It went on to say: ‘In the First Reich, Germany also wanted the title Emperor of Rome and in the next two they used their own means again against the states of Europe, two world wars and millions of dead, obviously this was not enough to quieten German egomania.

‘Once again it has surfaced but this time not with the use of cannon, this time it’s the Euro.

‘The Germans believe it’s theirs and we have to submit, surrender, hand ourselves over to the new Kaiser Angela Merkel who wants to rule in our own house.’

It is not the first time that Il Giornale has been at the centre of controversy with Germany – two months ago after Italy beat Germany in the Euro 2012 semi final they printed a picture of Chancellor Merkel below the headline: ‘Ciao, ciao culona’ which translates as ‘Bye bye lard arse.’

Or, in retrospect, Berlusconi attempting to antagonize Germany and in the process foundering Monti’s cabinet as Merkel joins Weidmann in just saying Nein, is not the worst strategy available to the former PM whose own tenure was cut short when the ECB refused to bail Italy out last November, stopped buying Italian bonds, forcing his resignation once Italian bonds hits 7%, and replacing him with a Goldman apparatchik.

Revenge just may be a dish served best cold all over again.